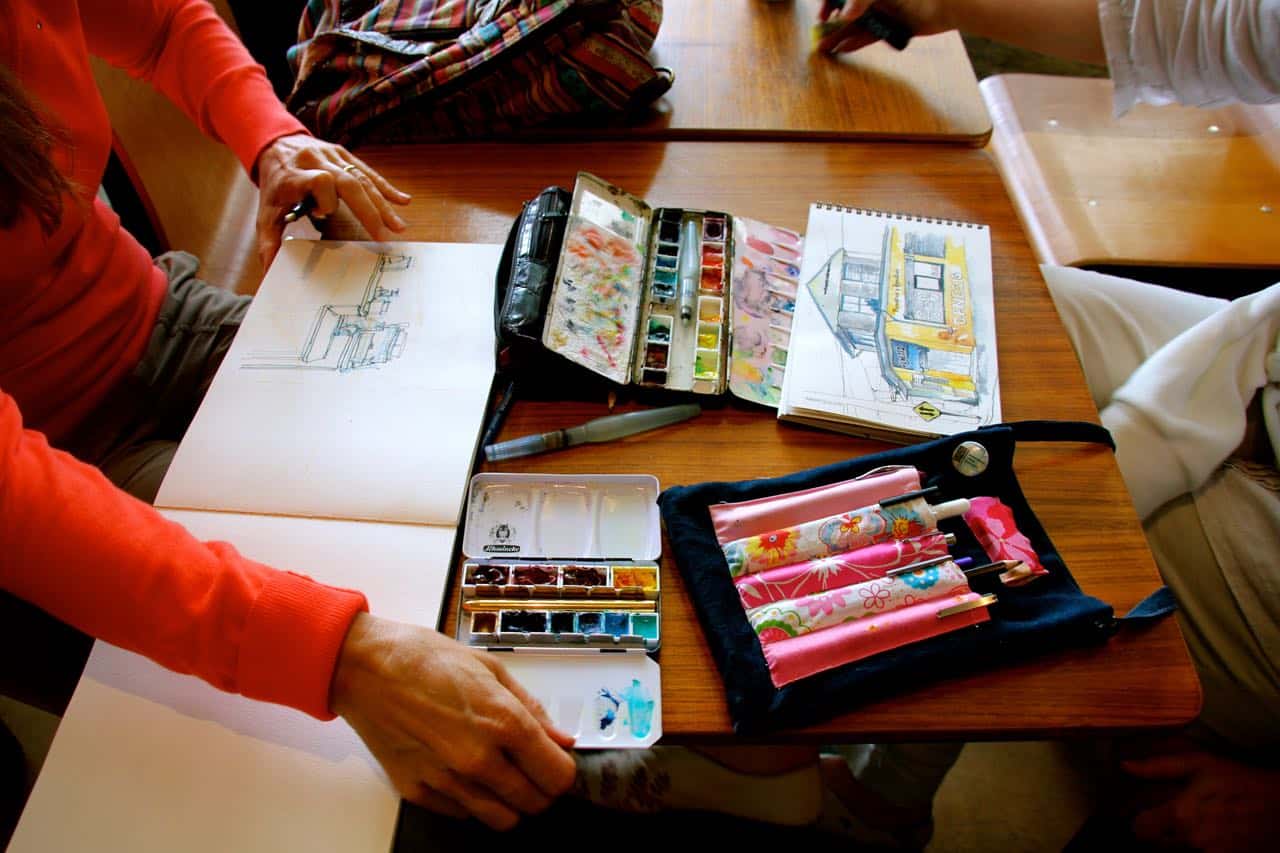 It’s a common image: an artist standing at an easel in a city square. The artist wears a beret and striped shirt. He aims his thumb at an object to approximate its angle. He assertively mixes colors on his palette, then dabs at the canvas with his brush. Et voilà! Yet another painting of Nôtre Dame.

Now imagine this scene in downtown San José, incorporating a diverse confederacy of amateur drawers, and you have Urban Sketchers Costa Rica. Simply organized and casually attended, Urban Sketchers is an excuse to draw as a group – and use pencil and watercolors to interpret the city as it really looks.

“The idea is that, if you feel lonely and you like to sketch, you can join us,” said Julia Stephan, cofounder of the group. “It’s a very loose organization. The work is all side-by-side, and no one is better than another.”

At first glance, Urban Sketchers seems like a quaint Costa Rican club, but it’s much bigger than that: In 2007, Spanish-born illustrator Gabriel Campanario was working for The Seattle Times and decided to start a Flickr account for “location drawings.” Such drawings were sketched outside, often in familiar places. What began as a Seattle-centric display attracted broad attention, and soon the idea spread around the world. Today, Urban Sketcher is a registered nonprofit organization based in Washington State, and international chapters have popped up in such disparate places as Ukraine and Indonesia. In total, Stefan estimates about 8,000 active members.

Originally from Hamburg, Germany, Stephan has lived in Costa Rica for the past seven years. Surprisingly, she didn’t have much experience with drawing before 2012. “If I saw something interesting,” she remembers, “my first thought would have been, ‘I want to take a picture of this.’”

But once she took an interest in plein air sketching, Stephan found herself flying to the Dominican Republic to attend an Urban Sketchers symposium. There she met Costa Rican architect William Cordero, who shared her interest in starting a chapter in San José. Nearly three years later, the group is alive and well and still organizing artist walks.

The next Urban Sketchers event takes place on Feb. 21 and follows the usual pattern: Artists gather together at 9 a.m. in front of the Post Office in downtown San José. They then roam the city as a group, set up their drawing pads, and sketch whatever intrigues them. Three hours later, they get together at the Central Bank on Avenida Central and show off what they’ve done. Then they go home, scan or photograph their drawings, and post them to a special Flickr account. The event is free and absolutely anyone can join in. A typical event will draw 20-60 people.

On the one hand, Urban Sketchers is a chance to mingle socially, despite the artists’ intense concentration on their sketchbooks. But Stephan also feels that San José holds a special interest, because its landscape is so routinely ignored.

“It’s not a museum city,” she said. “It’s not like La Antigua in Guatemala. They don’t paint a house yellow just so people can take the perfect picture. It’s very alive.”

“Our role is to document the world around us,” added Isabel Niehaus, a German-born eye doctor who has lived in Costa Rica for 12 years. Until she found Urban Sketchers, Niehaus had never sketched in her life. Today, she is an active member of the group and has cultivated her skills. “We’re not teachers, but we try to help each other out. We want [Urban Sketchers] to grow. Right now it’s very loose, and we would like to see people who are more committed.”

Until now, Urban Sketchers Costa Rica has held about two events per year, but Niehaus and Stephan are interested in organizing more frequent gatherings, in the ballpark of two per month. While the group has often surprised passersby, Niehaus and Stefan say that Chepeños regularly stop and watch, taking a second glance at ordinary sights like parked cars and pulperías. Their Flickr collection reflects this quotidian interest – people walking in the street, rusty steel rooftops tangled with electrical wires, and weathered signs advertising tiny businesses. As the group expands, so too will its collection.

“You don’t have to go to Paris or Rome,” said Stephan. “You don’t need Florentine architecture to sketch. People have already drawn all those things.”

“You look at the Flickr pages of other chapters,” added Niehaus, “and there are so many gifted artists. It’s amazing.”