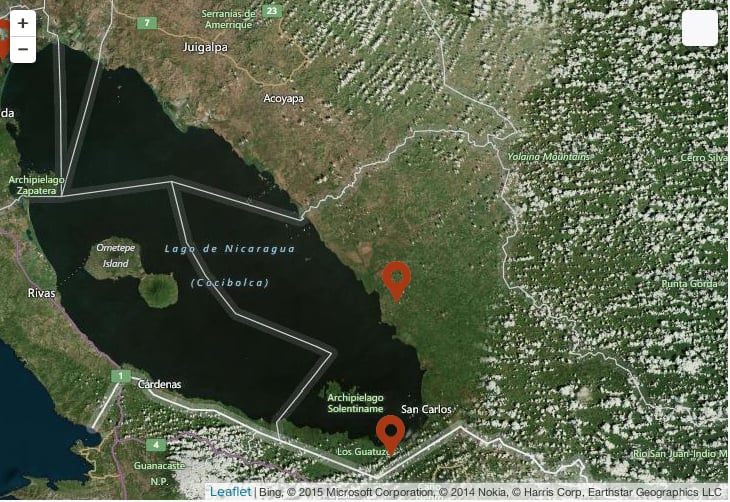 According to Ramsar, the San Miguelito refuge, on the southeast coast of Lake Cocibolca, supports "a large number of species of birds, fish, reptiles and mammals. It also performs essential functions in the prevention of natural disasters, in purifying and recycling the water of the lake, and in regulating local climate." ((Courtesy Ramsar))

MANAGUA, Nicaragua – A delegation representing the Ramsar Wetlands Convention has arrived in Nicaragua to evaluate the potential environmental consequences of construction of a massive interoceanic canal through the San Miguelito wildlife refuge in the southern region of the country, Nicaragua’s Environment Minister Juana Argeñal said Wednesday.

The delegation is headed by Ramsar’s Americas adviser, María Rivera, and responds to an invitation by the government of Daniel Ortega, Argeñal told local state-run media.

After meeting with government officials and representatives of the canal concessionaire, HK Nicaragua Development Invesment (HKND), Rivera said it is “very, very positive that Nicaragua has called the convention” to study the San Miguelito wetlands. According to the Ramsar adviser, all signatory countries are obligated to inform the convention about “any type of threat to a Ramsar site.”

The Ramsar Convention is an intergovernmental treaty that seeks national and international cooperation to protect wetlands across the globe. The delegation will present its findings and recommendations after visiting the refuge.

San Miguelito, in the southern department of Río San Juan, spans 43,000 hectares and houses 30 percent of the country’s bird species, as well as a large number of amphibians. It is located along the proposed 278-kilometer canal route, which officially broke ground on Dec. 22, 2014 with the start of a few access roads.

The canal will cross Lake Cocibolca, Central America’s largest freshwater lake, despite growing opposition from environmentalists and other opponents, who accuse the government of irresponsibly launching the massive project without completing a comprehensive environmental impact assessment. That study currently is directed by the British firm Environmental Resource Management (ERM), which promised to issue conclusions in March or April.

The Great Canal of Nicaragua will require a minimum investment of $50 billion, according to  HKND.