Colorful and boisterous rallies also took place in several other major cities in Latin America and Europe and as far away as India and Australia. The demonstrations aimed to build pressure ahead of a climate-change summit hosted by Ban in New York on Tuesday.

There were chants of “Hey, hey, ho, ho, fossil fuels have got to go,” as the colorful march snaked down Sixth Avenue with giant floats, balloons and banners with slogans such as “Urgent, Save our Planet.”

Ban, wearing a baseball cap and T-shirt with the words, “I’m for Climate Action,” praised de Blasio for announcing Sunday that New York would reduce its greenhouse gas emissions by 80 percent from 2005 levels by 2050.

“Our mission is to make this a decisive moment, a turning-point moment and I felt today that I was seeing history starting to be made,” de Blasio said. 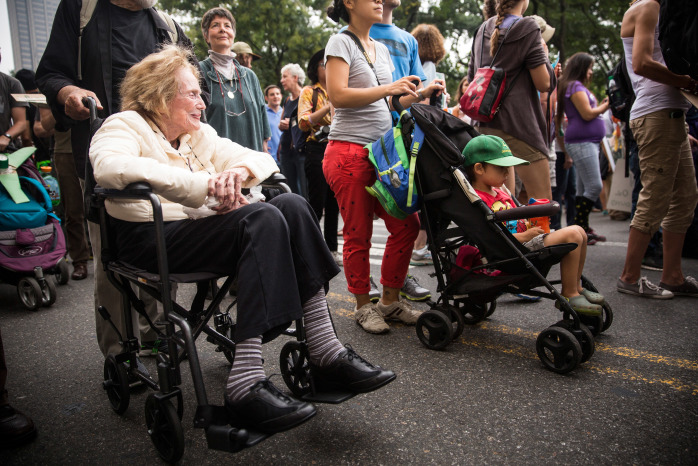 From Rio to Melbourne

In addition to New York, another 270,000 people turned out at about 2,500 events around the world, including in Costa Rica outside the U.S. Embassy in San José, organizers said.

In London, an estimated 40,000 people paraded past Trafalgar Square and the Houses of Parliament, including actress Emma Thompson, who likened the threat posed by climate change to a Martian invasion.

The pressure group Avaaz, which helped organize the rallies, said 30,000 people turned up in Melbourne and at least 15,000 in Berlin, where the crowd braved pouring rain, and another 5,000 in Rio de Janeiro.

In Paris, where police estimated that 4,800 people protested, many came on bikes with banners that read, “Climate in danger” or “World leaders, act!”

“Before we could say we didn’t know. Now we know. Climate change is already under way,” Nicolas Hulot, the French president’s special envoy for the protection of the planet, told the crowd.

In Madrid, hundreds gathered in front of the environment ministry, brandishing signs with slogans including “There’s no Planet B,” “Change your life, not your climate,” and “Our climate, your decision.”

In Cairns, Australia, where finance ministers from G20 nations were meeting, more than 100 people wearing green paper hearts around their necks gathered outside the venue.

Hundreds also massed in Sydney and in New Delhi, where around 300 protesters carried placards that read “I want to save forests” and “Coal kills,” as they shouted slogans and danced to pounding drum beats.

“The march numbers are beating our wildest expectations,” Patel said.

“In 2,500 marches from Paris to Bogotá, we’ve blown past expected numbers. Climate change is not a green issue anymore, it’s an everybody issue. The movement we’ve been waiting for is here.”

The “People’s Climate March” in New York was endorsed by more than 1,400 organizations, including environment, faith and justice groups, as well as labor unions. Students mobilized marchers from more than 300 college campuses.

The protest wound its way from Central Park through midtown on a two-mile (3.2-kilometer) route that was to end at 11th Avenue between 34th and 38th Streets.

After a moment of silence, slightly obscured in the chaos, participants used instruments, alarms and whistles to make as much noise as possible at 1 p.m.

The U.N. meeting Tuesday sets the stage for a crucial conference in Paris in December 2015 aimed at finalizing an agreement.