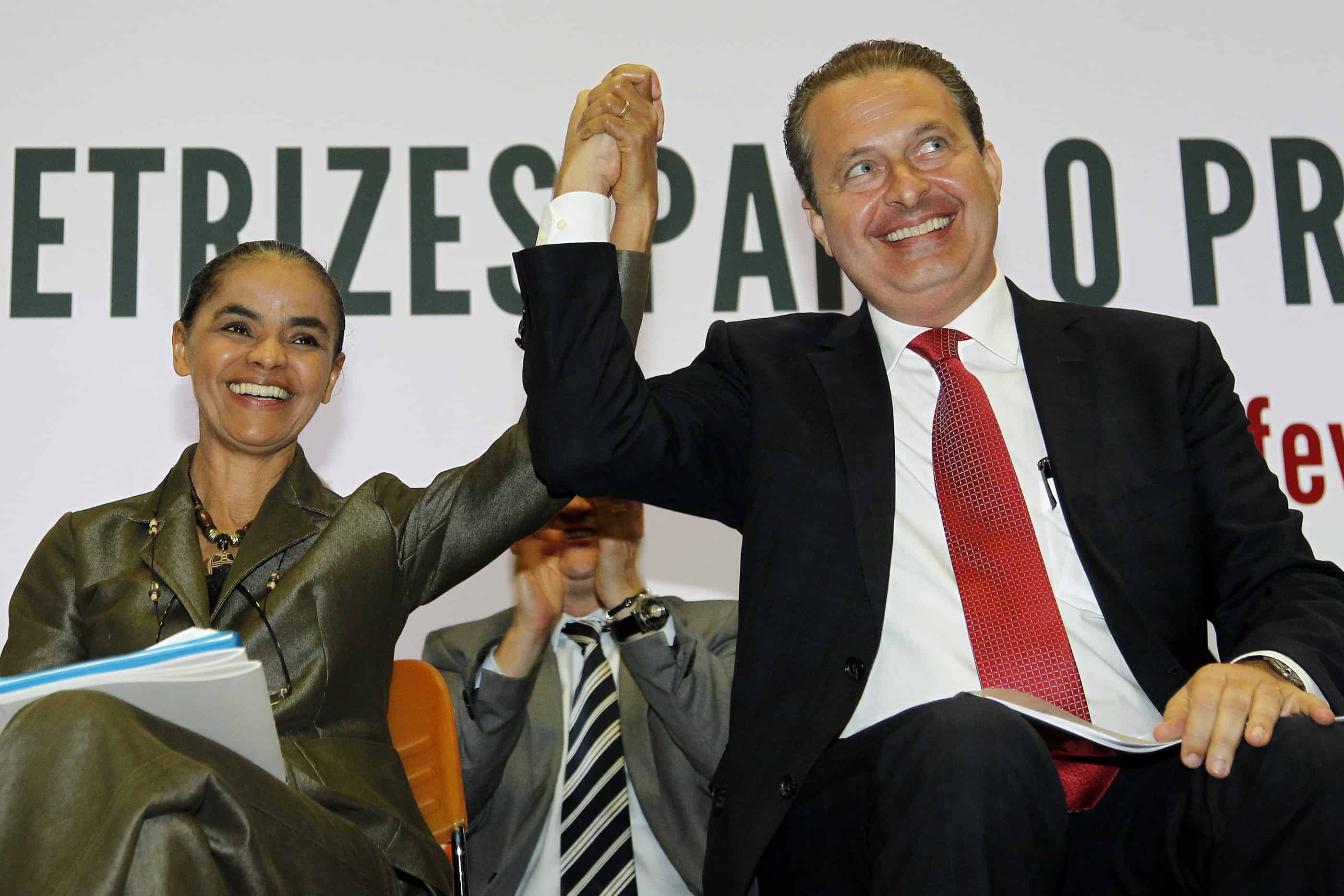 The governor of the northeastern Brazilian state of Pernambuco, Socialist Party (PSB) leader and presidential contender Eduardo Campos, right, and former senator and environmental minister Marina Silva gesture during the presentation of a government program of the coalition PSB/Rede, in Brasilia, on Feb. 4, 2014. Campos died on Aug. 13, 2014 when his campaign jet slammed into houses in Santos city in bad weather, killing all seven on board and setting buildings alight. (Beto Barata/AFP)

Twenty years ago, when he debuted in national politics, Eduardo Campos, the Brazilian presidential hopeful who died in a plane crash Wednesday, was easy to underestimate. With his elegant suits, camera-ready smile and pale-blue eyes as big as fog lights, the junior legislator from the northeastern state of Pernambuco seemed a better fit on the set of a soap opera than in the two-fisted arena of Brasilia.

He was nothing like his congressional colleague and close friend, Aldo Rebelo, the ambitious Communist Party chieftain who I’d arranged to meet one night in a tony Brasilia restaurant favored by power brokers. Campos was by his side that evening, but clearly as entourage. As it happened, Rebelo would go on to occupy second-rate jobs in service to leftwing president Luiz Inacio Lula da Silva, where his most memorable offering was a legislative bill to banish foreign words (delivery, sale, shopping center) from Brazilian billboards and schoolbooks.

Campos, however, was on a tear. He became an industrious lawmaker, science minister and a two-term governor of one of Brazil’s fastest growing states, rising to command the maverick Brazilian Socialist Party and launch his own run for president.

When his plane crashed Wednesday, falling in a fireball on a residential neighborhood in Santos, on the Atlantic seaboard, Brazil lost not just a charismatic presidential hopeful but one of Brazil’s best bets for fresh leadership in a land weary of gray-headed political “caciques,” or tribal chiefs, and their alphabet soup of parties and electoral coalitions.

Campos wasn’t touted to win the October elections. Polls showed he would get about 10 percent of the vote, trailing Social Democratic Party challenger Aécio Neves (20 percent) and well behind the incumbent, Dilma Rousseff (38 percent).

But the rise of this pragmatic socialist from nowhere, who wanted to harness the power of the market, not squash it, pumped an unexpected shot of adrenaline, and uncertainty, into an otherwise humdrum campaign, in which one in three Brazilians vowed to vote for neither of the frontrunners. View of the site of the crash of the Cessna 560XL aircraft carrying the presidential candidate of the Brazilian Socialist Party (PSB) Eduardo Campos in Santos, São Paulo state, Brazil, on Aug. 14, 2014. The plane failed to land and crashed into a gymnasium and two homes, killing all its passengers. Nelson Almeida/AFP

While once Rousseff looked poised to lope to a first-round victory, Campos’ third-party challenge spoiled the idyll, pushing the election toward a potential runoff. “Campos made the election competitive,” said political analyst Carlos Pereira, of the Getulio Vargas Foundation.

Now the race could grow even tighter. Horse sense holds that Campos will be replaced by his running mate, Marina Silva, a former Amazon rubber tapper who rode a green wave into national politics. She won a Senate seat before being named environment minister under Lula, where she became the darling of Brazilian environmentalists but the bane of developers.

She soon flamed out after clashing with cowboys and contractors, but went on to parlay her green base into political capital, finishing third with a formidable 20 million votes in the 2010 elections.

But Silva’s zeal also made her damaged goods in Brazil’s conservative party system, and after a failed bid to launch her own party, she joined Campos’s six-party electoral coalition. To head that ticket, she now must win the blessings of a half-dozen caciques who have little patience for outliers and even less for electoral defeat.

For now, no one is in the mood for kissing rings. “This is a tragedy that calls for mourning and deep sadness,” Silva told reporters last night, her voice trembling. She had been scheduled to fly with Campos but canceled at the last moment.

With the election weeks away, the quiet won’t last. Should Silva get the nod — and agree — to step into Campos’ slot, the race for the Planalto threatens to become interesting. “Eduardo Campos was the least known of all the candidates. Now he’s all the country is talking about,” says Jose Casado, a veteran political journalist at O Globo. “It’s a new election.”

With her own soft-spoken charisma, and a sympathy bump, analysts expect Silva to jump in the polls. A little more momentum could see her close the gap with Neves, or even overtake him, and force a runoff vote. In that case, Rousseff could find herself running against not just a vigorous new candidate but the successor to a political legend.