Update, Wed., May 28: After being taken into custody on Tuesday, sources say Patton was transferred to a hospital in Pérez Zeledón. According to prosecutor Edgar Ramírez, officials are evaluating placing her in a psychiatric care unit of the Justice Ministry to serve her nine-month preventive detention.

After more than a week of testimony, a Costa Rica criminal court on Tuesday convicted U.S. expat Ann Maxin Patton, 43, of shooting to death her husband, U.S. financier John Felix Bender, 44, in 2010.

The court sentenced Patton to 22 years in prison for the crime. Judges Adolfo Calderón Bogantes, Cristian Calvo and Liner Zúñiga Herrera ordered Patton to be placed into nine months of preventive detention while the sentence is reviewed.

This is the second time Patton has faced a murder trial over the incident, which occurred at the couple’s luxury jungle estate in Florida de Barú, Pérez Zeledón, in southern Costa Rica. A different court had acquitted Patton last year, but an appeals court ordered a new trial. The retrial began on Monday, May 19.

Patton, born in Brazil, has always claimed Bender’s death, the result of a single gunshot wound to the neck, had been a suicide.

At the start of the retrial last week, Costa Rican prosecutor Edgar Ramírez said, “We will demonstrate that there is convincing evidence, scientific proof that is irrefutable.” Patton said she fought with Bender that night in an unsuccessful attempt to wrestle the firearm away from him. Prosecutors, however, say she shot him.

Among the evidence judges cited in delivering a guilty verdict were photos of blood patterns obtained at the scene, and a torn pillow, which according to the court, proved the weapon was found too far from the victim to have been a suicide. Prosecutors had presented the theory that Patton shot Bender, who was wearing earplugs and was found in a fetal position, while he slept.

“The firearm was far from the tear in the pillow [when it was fired], because if [the gun] had come in contact with the pillow, it would have produced a smoke and burn pattern, which leads the court to conclude that the firearm was far away from the victim’s head,” the sentencing judge stated.

Judges also cited the trajectory of the bullet, which they said could not have been self-inflicted.

“The fundamental element for which the court has based its opinion is the position of the body at the moment Judicial Investigation Police officers arrived, at which point the photos we can observe here were taken,” Calderón said.

Calderón said judges did not believe, based on the evidence, that Bender’s body was moved after he was killed, and they ruled against the possibility of a struggle.

Prosecutors, however, were never able to establish a motive in the alleged killing. To that point, judge Zúñiga said it is possible to commit a crime without a clear motive.

“If there is no known motive, we must examine the rest of the evidence, as established by Article 71 of the Penal Process Code,” Zúñiga said.

Correction: This story previously stated only one judge during the first trial believed there was not enough evidence to convict Patton. However, the first court’s ruling to acquit was a unanimous decision by all three presiding judges. The Tico Times regrets the error and have included a copy of the ruling below.

A total of six judges weighed in during both trials. According to that evidence, the gun was 50 centimeters away from Bender’s head when it was fired – too great a distance to have been a suicide.

The new trial took place in the southern Costa Rican city of San Isidro de El General, and lasted more than a week. 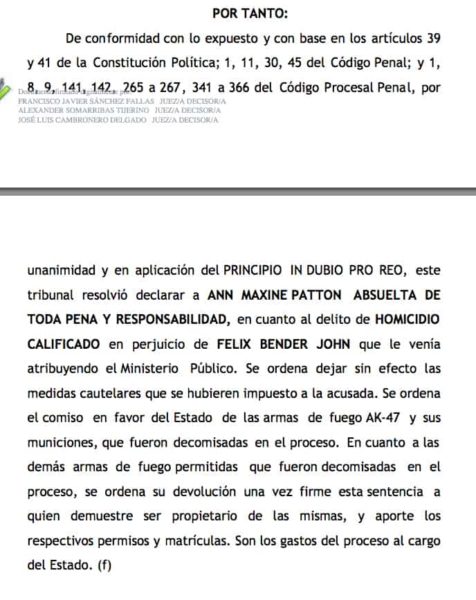