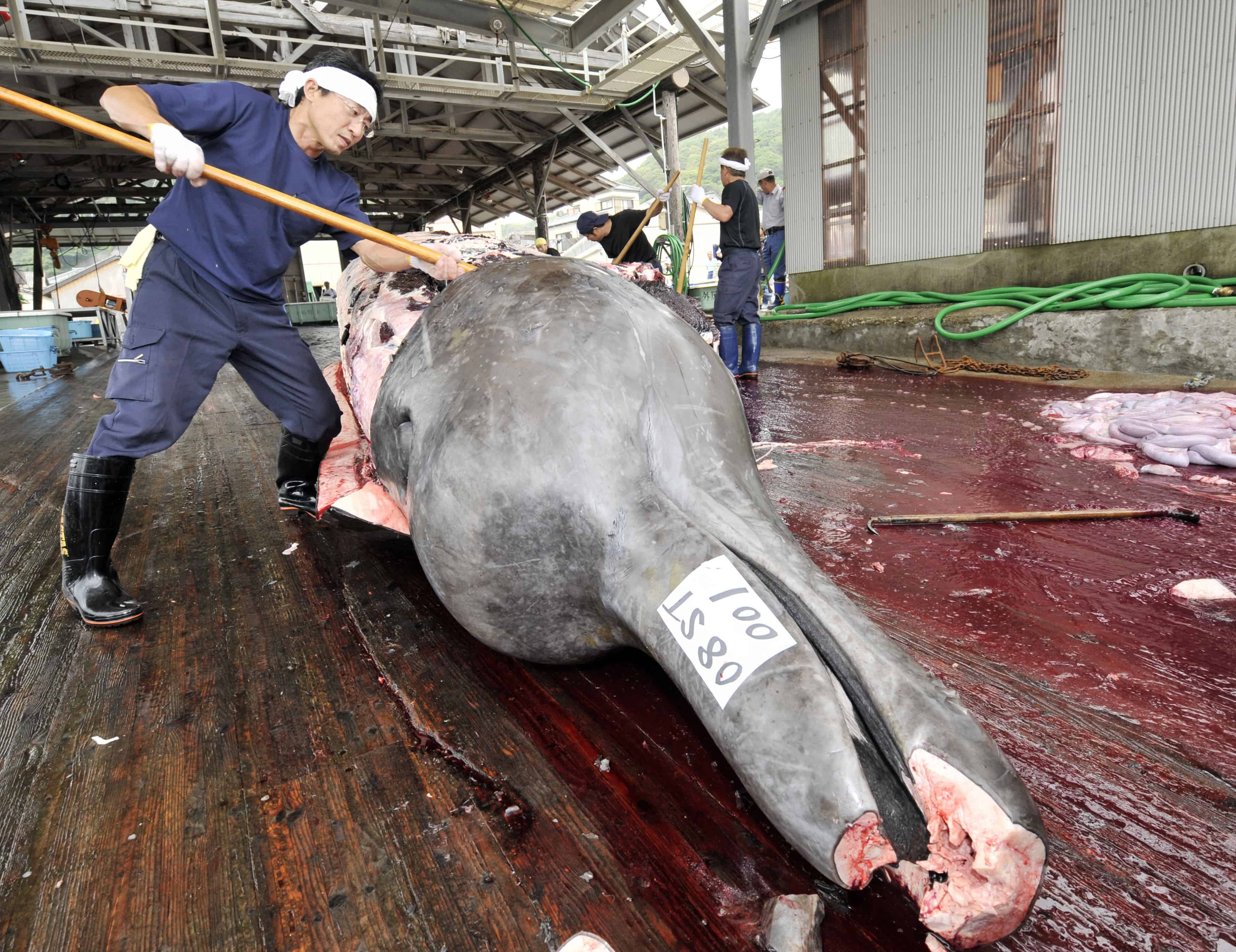 This file photo taken on June 25, 2008 shows Japanese fishermen cutting up a 10m-long bottlenose whale at the port in Wada in Minami-Boso, Chiba prefecture, east of Tokyo. The U.N.'s top court on March 31, 2014 ordered Japan to end its annual Antarctic whale hunt, saying in a landmark ruling that the program was a commercial activity disguised as science. ( Yoshikazu Tsuno/AFP)

THE HAGUE – The United Nations’ top court on Monday ordered Japan to end its annual Antarctic whale hunt, saying in a landmark ruling that the program was a commercial activity disguised as science.

Tokyo said it would honor the ruling shortly after it was handed down at the Hague-based International Court of Justice, but did not rule out the possibility of future whaling programs.

Tokyo was accused of exploiting a legal loophole in the 1986 ban on commercial whaling that allowed the practice to collect scientific data.

Japan had argued that its JARPA II research program was aimed at studying the viability of whale hunting, but the world court found that it had failed to examine ways of doing the research without killing whales, or at least while killing fewer whales.

Agreeing with Australia, which in 2010 hauled Japan before the Hague-based court in a bid to end whale hunting in the Southern Ocean, Tomka said that “special permissions granted by Japan are not for purposes of scientific research.”

“The evidence does not establish that the program’s design and implementation are reasonable in relation to its stated [scientific] objectives,” he said. “The court considers that the scientific output to date has been limited.”

JARPA II has been running since 2005, in which time some 3,600 minke whales have been slaughtered.

Norway and Iceland have formally challenged the 1986 International Whaling Commission (IWC) moratorium and continued with their commercial whaling operations.

Only Japan had tried to by-pass the regulations by claiming it was conducting research, even though it admitted the resulting meat ended up on people’s plates.

Conservation groups hailed the ruling, which Japan said it would respect despite “deep disappointment.”

“As a state that respects the rule of law … and as a responsible member of the global community, Japan will abide by the decision of the court,” chief negotiator Koji Tsuruoka told reporters outside the court.

“In terms of a future course of action, we have to carefully examine the content of the judgment,” Shikata told AFP.

Environmental group Sea Shepherd, which has been campaigning against the Japanese whaling fleet in the Southern Ocean, said it was ready to refocus its attention on the Atlantic.

“I’m not 100 percent convinced they will abide by the ruling. They tend to agree and then do whatever they want to do anyway, that has been the history with the International Whaling Commission,” Sea Shepherd founder Paul Watson told AFP by telephone.

“If they don’t return [to the Antarctic], then we’ll be able to refocus our efforts against Norwegian, Icelandic and Faroese whaling,” he said.

The world court said Japan’s whaling program has led to the killing of 6,700 minke whales since it was established 18 years ago.

Canberra argued that the program was in breach of international conventions and Japan’s obligation to preserve marine mammals and their environment.

“This decision sends a clear message to governments around the world that the exploitation of animals will no longer be tolerated and animals must be protected at the highest level,” said Claire Bass, head of wildlife campaigns at the World Society for the Protection of Animals.

“All eyes are now on Japan to respect this decision,” she said.

“The ruling of the court demands to be observed,” said Ghislaine Llewellyn, conservation manager at WWF-Australia, added.

Japan has consistently defended the practice of eating whale meat as a culinary tradition and vowed it would “never stop whaling.”

In April last year, Tokyo announced its whaling haul from the Southern Ocean was at a record low because of “unforgivable sabotage” by Sea Shepherd activists.

Established in 1945 to rule in disputes between countries, the International Court of Justice is the United Nations’ highest judicial body and the only one of five principal U.N. bodies not located in New York.