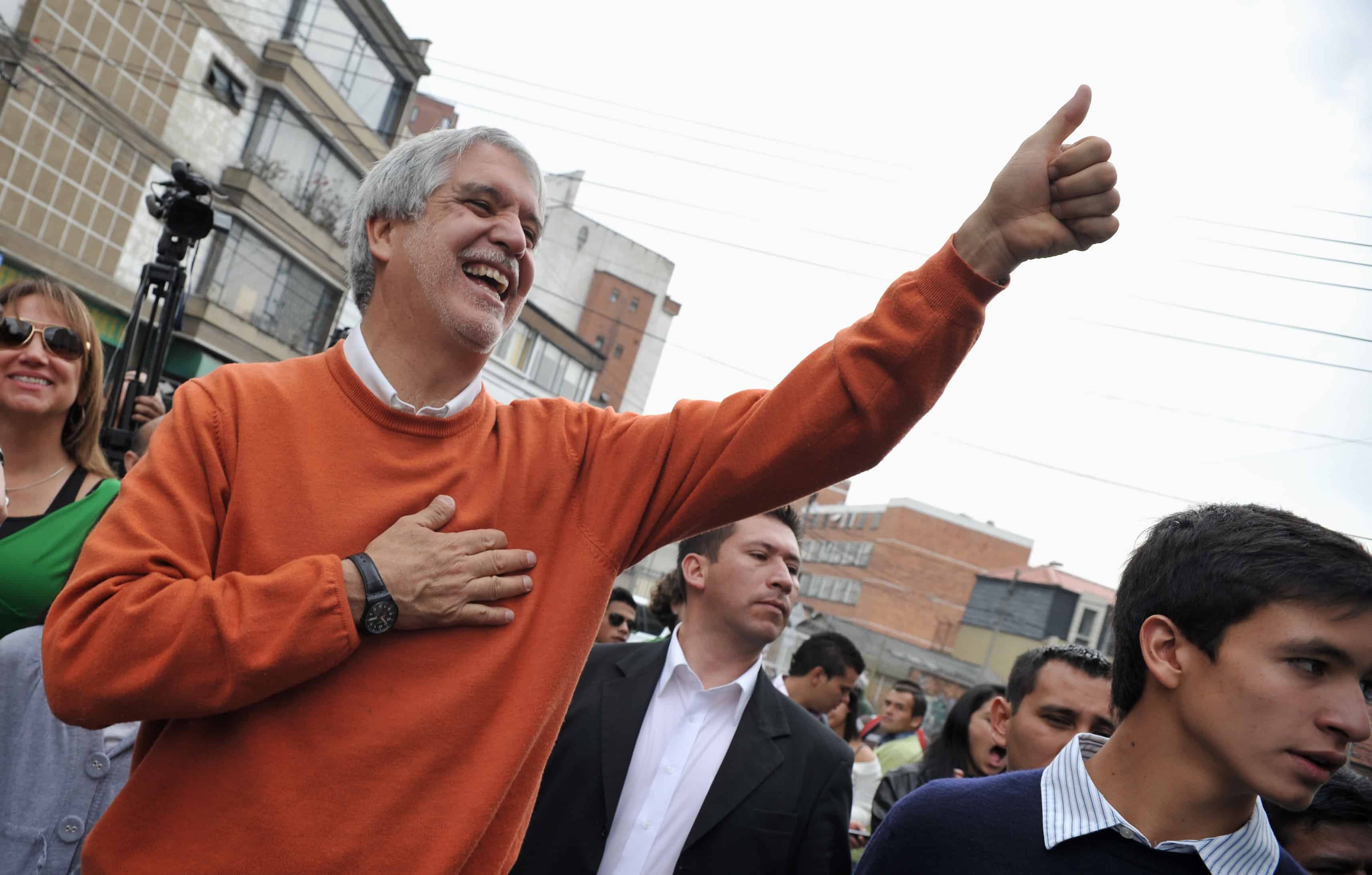 Colombian ex-mayor of Bogotá and Green Party presidential candidate Enrique Penalosa gives a thumbs-up after casting his vote during a local and regional election in Bogotá, on Oct. 30, 2011. (Guillermo Legaria/AFP)

BOGOTÁ, Colombia – Enrique Peñalosa, the former Bogotá mayor who introduced the city’s mass transport system, is favored to win Colombia’s presidential election this year just one week after being nominated, according to a new poll.

Green Party candidate Peñalosa would get 17.1 percent in the first round of voting on May 25, compared with 25.5 percent for incumbent President Juan Manuel Santos, according to a Datexco poll published today in the print edition of El Tiempo newspaper. In the second round, however, Peñalosa would win 40.4 percent of the vote to Santos’s 37.1 percent. The survey of 1,000 people was conducted March 13-14 and had a margin of error of 3.1 percent.

As mayor of Bogotá from 1998 to 2001, Peñalosa introduced the mass transit bus network, and 250 kilometers (155 miles) of cycle paths. The 59-year-old candidate, who studied economics and history at Duke University in North Carolina, has pledged to make reducing crime his top priority, with “severe” punishments for violent criminals, and schemes similar to the “three strikes” laws in the U.S., with incremental sentences for habitual offenders.

“We aren’t giving enough priority to cutting crime in our cities, so people live in fear,” Peñalosa said in a March 12 interview in his Bogotá office. “People are afraid to use a cellphone in the street. Even though I believe in the importance of sound fiscal policy and all that, it’s much more important to have security than to have low interest rates or to have a good exchange rate.”

Peñalosa said he wants to build more jails and increase the number of police officers. The number of homicides fell to 15,234 last year, down 3.7 percent from 2009, the year before Santos took office, while other crimes including burglary, vehicle theft and sexual assault increased, according to data collected by the Defense Ministry.

If elected, Peñalosa also said he’ll set up a commission of Colombia’s best and brightest to overhaul the nation’s industrial policy. This will be similar to the Korea Development Institute, or KDI, a think tank founded in 1971 to research economic policy and help the Korean government formulate five- year development plans, he said.

“We should have an institution, similar to the KDI, with 40 or 50 Ph.D.s, who should think about what should be done,” Peñalosa said. “I’d pay them extremely well so that they wouldn’t be lured by industry or by the private sector afterward.”

Government support is currently given to business groups that are most able to exert pressure on politicians, rather than on any strategic grounds, he said.

Peñalosa says another of his priorities is to develop Colombia’s Pacific coast, so that the country can take advantage the “ocean of the future,” which borders the world’s fastest- growing economies, such as China.

The Pacific province of Chocó has the highest poverty rate in Colombia, according to the national statistics agency.

“It’s an absolute shame the kind of cities we have in the Colombian Pacific,” Peñalosa said. “We have some absolutely horrible living environments, which make it impossible to make any kind of serious investment, or to get highly qualified people to live in cities like Tumaco or Buenaventura.”

More than 19,000 people fled their homes in Buenaventura last year, according to data gathered by the government, as cocaine smuggling gangs fought for control of Colombia’s biggest port.