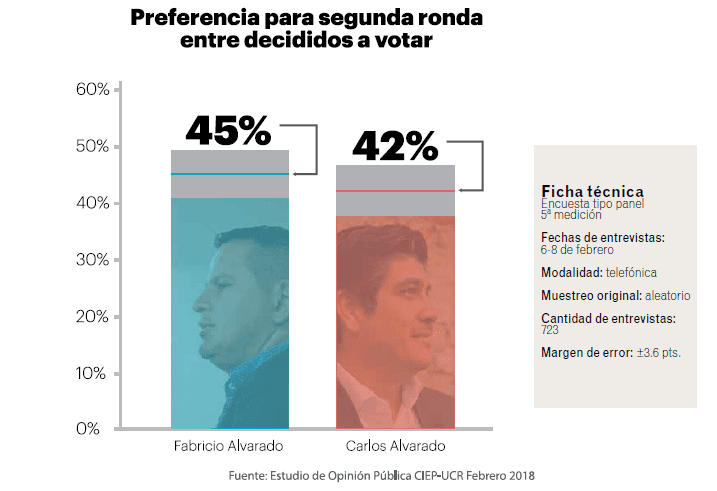 The CIEP's poll results displayed graphically explain Fabricio Alvarado has a 45% of support from voters, while Carlos Alvarado has 42%. (Courtesy of Semanario Universidad)

Evangelical preacher Fabricio Alvarado and former government minister Carlos Alvarado are in a statistical tie as the second round of Costa Rica’s presidential campaign enters full swing, according to a poll published Wednesday.

The poll, conducted by the University of Costa Rica’s Center for Research and Political Studies (UCR-CIEP), shows Fabricio Alvarado with 45 percent of voter support, versus a 42 percent for his rival. The difference is within the poll’s margin of error, 3.6 points.

“The scenario that has opened up is a very close race between very even forces,” CIEP political scientist Ronald Alfaro told AFP.

Fabricio Alvarado, a 43-year-old journalist who left his job as a reporter to preach and sing in Pentecostal churches, represents the National Restoration (PRN). Until recently, the party was a small one, but that changed on Feb. 5: in addition to Alvarado’s success in the first round of elections, the party captured a whopping 14 seats in the 57-member Legislative Assembly, second only to the traditional National Liberation Party with 17.

“We’ve maintained significant stability, which gives us a lot of satisfaction, but we continue to invite those who want to restore this country to work” to win votes in the center of Costa Rica, where his party has less strength, Fabricio Alvarado said in a statement.

Carlos Alvarado, 38, also a journalist and a former Labor Minister, is the candidate for the Citizen Action Party (PAC, center left).

The poll “motivates us to keep working, to keep reinforcing our job proposals for the whole country, specially for the coastal zones,” where his opponent has the advantage, said Carlos Alvarado.

The evangelical preacher obtained 24.9 percent of the vote in the Feb. 4 election, versus 21.6 percent for the PAC candidate.

The CIEP poll is based on a panel of 723 people consulted periodically since October 2017, and was carried out by phone from February 6–8.

According to the poll, 54 percent of Fabricio Alvarado’s supporters say the primary reason they plan to vote for him is “defense of the traditional values”.

The preacher, who less than one month before February’s elections was at 3 percent in the CIEP poll, surged to the lead after the Inter-American Court of Human Rights ruled in favor of same-sex marriage within its member countries, which include Costa Rica. Alvarado said that if he is elected, he will withdraw Costa Rica from the court in order to avoid complying with the ruling.