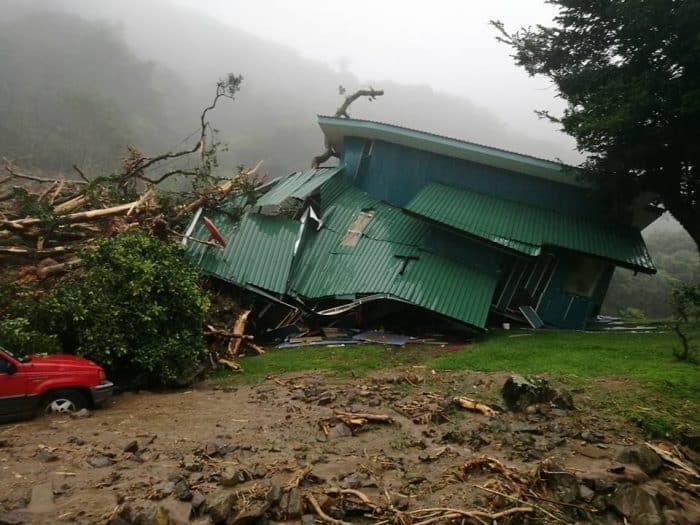 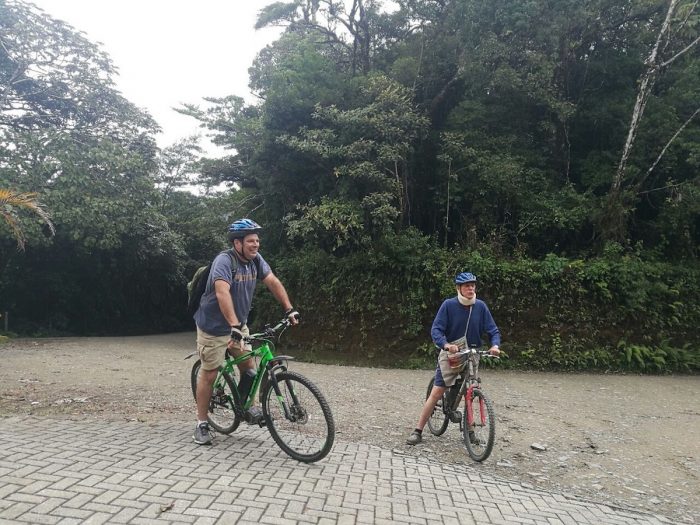 Bike rides with Paul Smith – and other dangerous pursuits 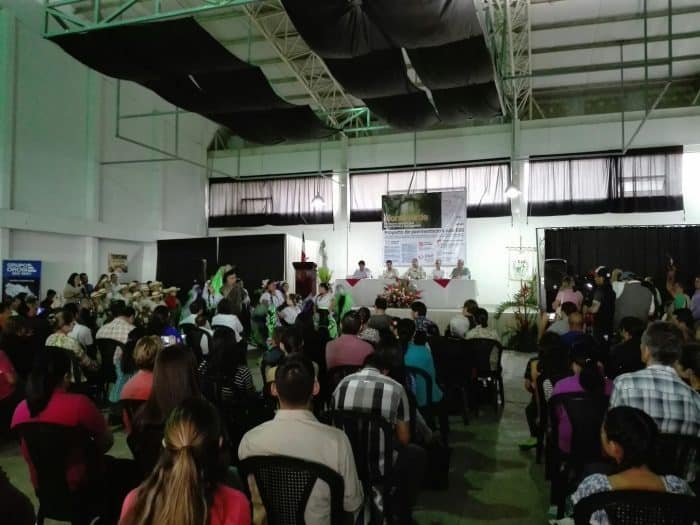 The day I rode my bicycle to see the president

Monteverde: You can get there from here, but you’ll need some pura vida 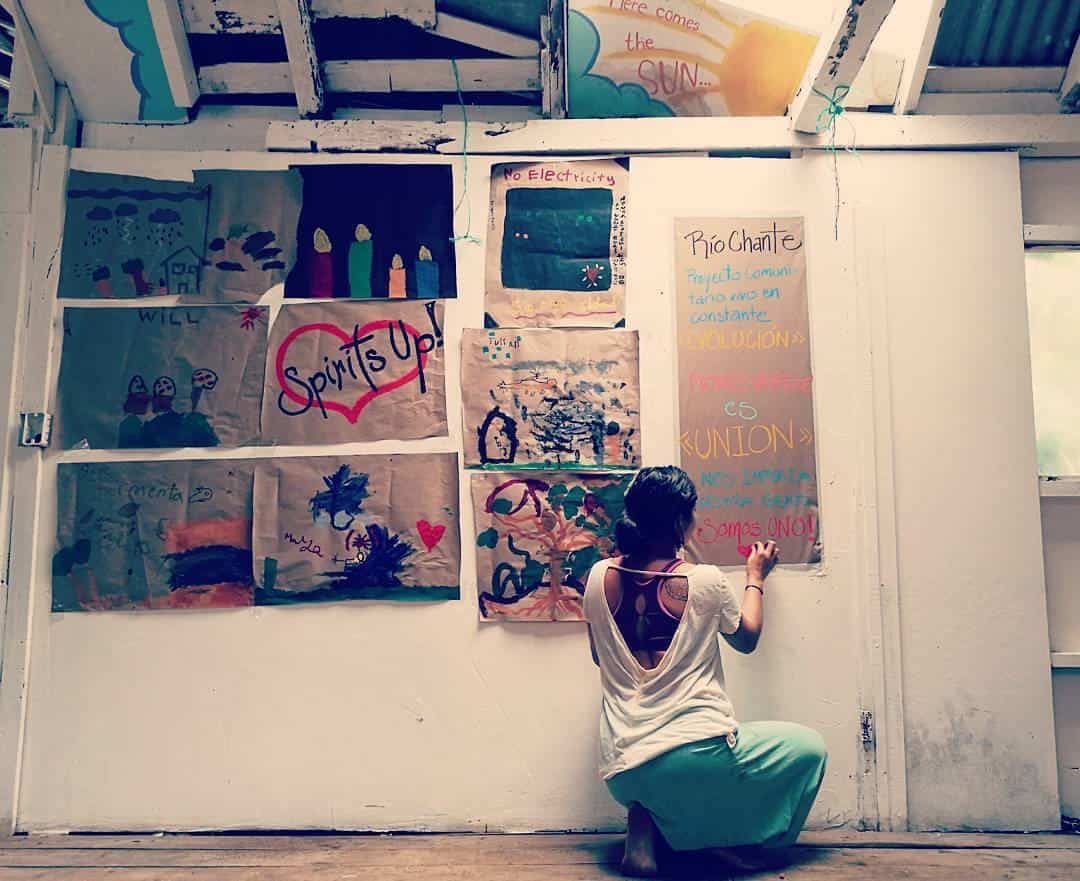 (Courtesy of Patrick Moore. Signs and children's drawings at the RioChante Community Center in Monteverde read, "No Electricity," "Spirits Up!" and "We Are One.")

“The road is gone. Destroyed. The landslide covers everything.”

I stared intently at my neighbor in the passenger seat. I had picked him up after dropping off another neighbor at the spot where, as of Wednesday, Oct. 11, the road to Monteverde was almost – but not quite – open.

I could not let it go. “But I was just there a couple of hours ago and it was fine.”

He nodded, understanding my reluctance. “Yes, but it just happened.”

I dropped him off in front of his house, then headed out to investigate the massive landslide. If true, this was a huge hit to the community.

A few minutes later, after walking a short distance because of road work beginning on a culvert, I stood in front of Banco Nacional. As I had suspected, the road was fine.

As I made my way back to my car I thought through all of the other rumors I had heard in the past few days, after Tropical Storm Nate wreaked havoc in our mountain community. They were always sensational. They tended to the negative (the house fell off the cliff, catching fire as it went), but sometimes featured wildly optimistic statements as well (the bridge was fixed last night!). Courtesy of the Monteverde Friends School. An impromptu ‘vacation camp’ for public and private school kids alike helped families get through a tough time.

In a way, this is akin to the fact that everyone here responds to a request for directions even if they have no idea what you are asking or where it is you want to go. Culturally, “I don’t know” is not considered an acceptable response.

Now, in a time of crisis, people want to share information they have heard. They want to be helpful. Unfortunately, much of the time this information is just gossip they heard from someone else and has already been expanded upon a few times before it got to them.

Our particular situation is not being helped by media reports such as one television segment that aired on Oct. 13. The segment used week-old footage and presented the area as a total loss with no recognition of the massive amount of work, and progress, that has taken place.

I say all of this as a preface to my follow-up on my initial account of the storm. My goal is to provide people – here in Costa Rica, and abroad – with firm footing regarding the status of our community. The information that follows is not rumors, but is instead a verified list of progress and achievements

First, due to the work of many, many parties, including the National Emergency Commission (CNE) and its local committee, the Tourism Chamber, the Municipality, the Ministry of Public Works and Transport (MOPT) and many, many local volunteers, I can confirm that almost all of the roads leading in, and through, the Monte Verde District are open, including the road down to the San Luis Valley. This is a huge change as much of the area was cut off, isolated, due to damage from the storm. Marshall Cobb / The Tico Times. We’ve got road! The route to Monteverde is now open once more.

Second most major attractions and reserves not already back in business were expected to reopen by Monday Oct. 16.

Third, with credit also due to those parties mentioned above and, of course, water and electrical authorities, water and telecommunications services have been reestablished for the vast majority of the District. Related: gas stations have been open for over a week, and all grocery stores are fully stocked. Public buses are running, and the regular fleet of taxis is available.

Fourth, recognizing that some portion of this group is typically closed in October because it is the low season for tourism, the vast majority of hotels and restaurants are now open. How did all of this happen so quickly? After many conversations with many different parties, I can say that the spirit of collaboration and the willingness to act were, and still are, operating at levels rarely seen here – or anywhere. In terms of problem solving, pura Vida is often more of a, “Relax, take a deep breath and know that this, like a bad shrimp, will eventually pass.” The version of pura vida reflected now is much more of a, “We’re all in this together—now let’s get out. Quickly!”

There are too many groups and individuals contributing to this effort for me to attempt a full accounting, a worthy effort that should eventually take place. For now I can convey a small sampling of these success stories that focuses largely on those who were trapped within Monteverde proper:

Per Sue Gabrielson, Head of School for the Monteverde Friends School: “We opened a ‘vacation camp’ so families — all families, not just students from our school — could drop off their kids for the morning and know that they were safe. More than 30 kids, ages three to fourteen, participated daily. The ‘counselors’ included teachers from both MFS and other schools in the zone, as well as teen volunteers.

“MFS also used donated food from community members — particularly Hotel Fonde Vela, which butchered and prepared their chickens when they ran out of feed, to prepare snacks and lunches for community members,” she wrote.

Debra Hamilton, Executiye Director of The Monteverde Institute, told The Tico Times, “We are pleased that the MVI was able to serve the community by opening our doors to act as the daily meeting center where all members of the community could receive updates on relief efforts, the progress of repairs to roads and utilities and the sharing of resources. MVI also provided an area for cooking, and provided water for residents in need.”

Radio Zona Alta also played a prominent role by providing everyone in the community with first-hand accounts of relief and repair efforts throughout the District. This reporting took place via videos shared from their Facebook account. Coincidentally, Radio Zona Alta was visiting the Monteverde Friends School for an update when a mysterious helicopter made a couple of landings to distribute supplies that had been donated to the main relief center in San José.

There is still work to be done. The road to Tilarán, to my knowledge, still requires a great deal of work. Similarly, depending on the day, the Coastal Highway/27 from San Jose has either partial or complete closure due to the problems with landslides that predate Nate. And, of course, the bridge in the community of Guacimal, which sits about forty minutes down the mountain, was completely destroyed — as were a large number of houses and buildings when the river came out of its banks. This landslide nearly swept a local family off of the mountain. All emerged bruised by otherwise unharmed. Jorge Hincapie

How can you help? One local family, whose destroyed home is shown above, started a Kickstarter campaign. There are also families all across Costa Rica that have lost their homes, and all of their possessions. This story in the Tico Times lists a number of different options for donations around the country, including a link where U.S. tax-deductible donations can be made to the Monteverde Community Fund. You can also donate to the Monteverde Friends School (MFS) and the Monteverde Institute (MVI). MFS donations will largely go to cover the cost of tuition for many local parents who will no longer be able to afford it; MVI donations will be channeled to the local Emergency Commission for use in supporting the local recovery.

Costa Rica’s economy is heavily dependent on tourism. The ripple effect of the direct costs of this storm, as well as the loss of jobs and income for many of the residents here, has the potential to carry on for months, likely years, to come.

I give you my word that the information above is true, and has nothing to do with a purported landslide in front of Banco Nacional or a miraculous bridge that appeared overnight. I can also promise you that you were never going to like the roads here anyway, which is part of the fun, and the Pura Vida.

Note: I have received queries from many abroad seeking to know about the condition of various towns and roads throughout Costa Rica. As I said above, there are unfortunately more rumors than facts floating about, and the situations in many communities is changing frequently. I recommend that those planning to visit Costa Rica in the coming weeks contact the appropriate hotel, tour operator or attraction directly for the most up-to-date information.