Pic of the Day: Stunning views on the road to Monteverde

Monteverde: You can get there from here, but you’ll need some pura vida 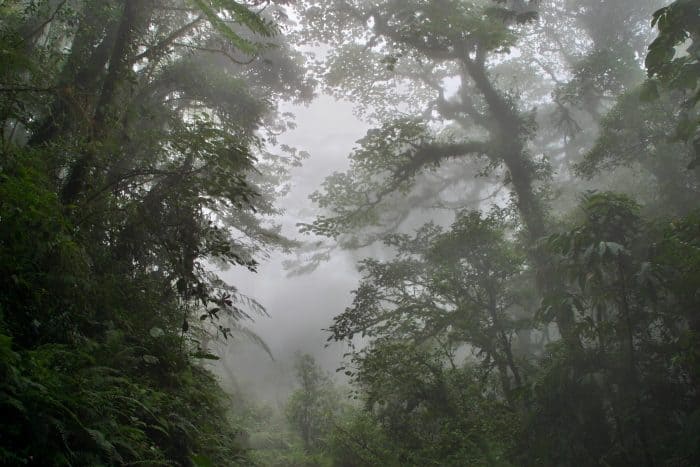 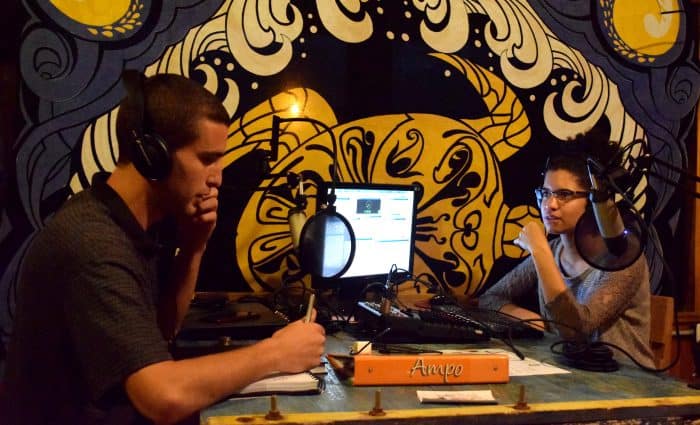 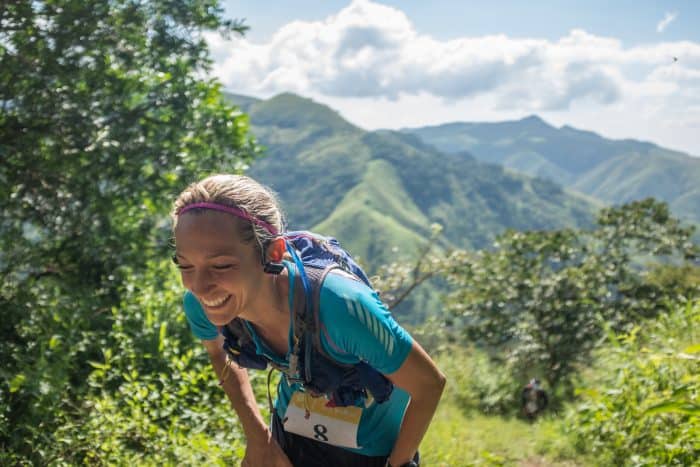 To pave or not to pave? Monteverde’s ongoing roadway saga 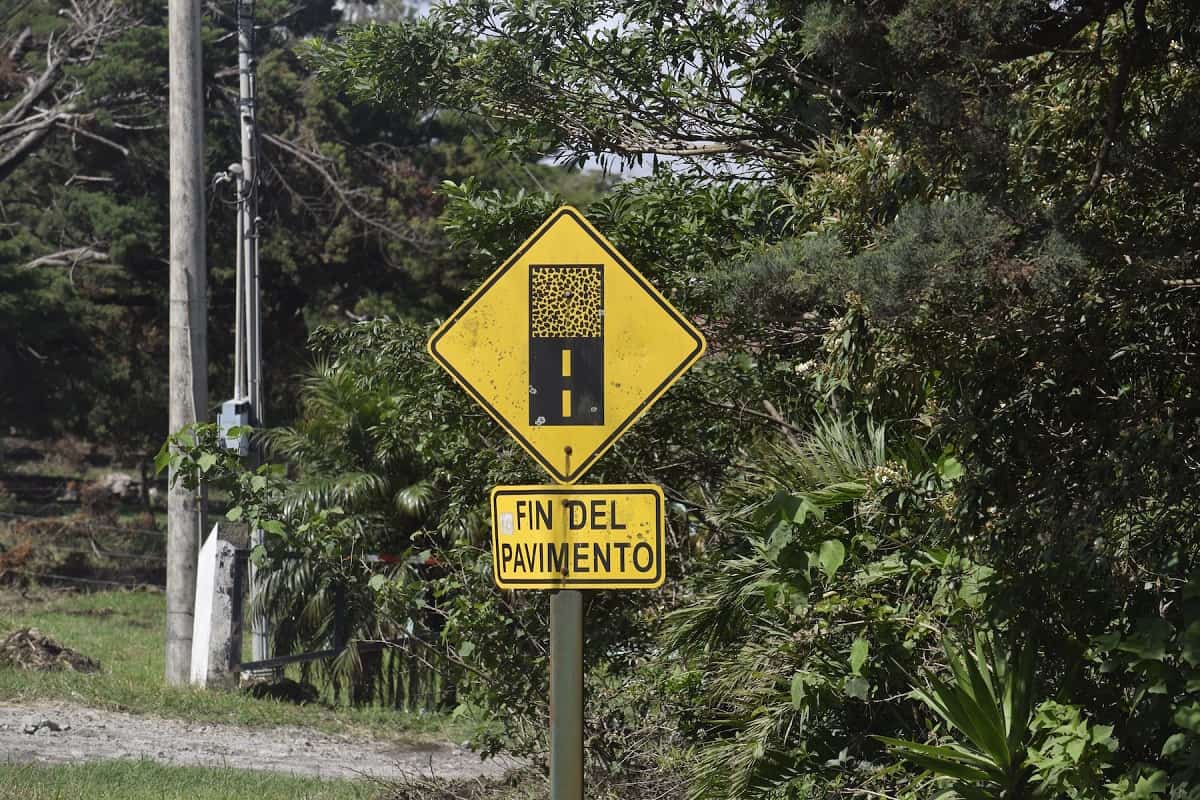 This sign may soon be an artifact, and the community has mixed feelings. (Marshall Cobb / The Tico Times)

See also: Monteverde – You can get there from here, but you’ll need some pura vida

Our car magically stopped rattling. The radio was once again audible and the tingling in my backside finally subsided. Our boys in the back seat used this newfound comfort to devote their attention to what was really important — annoying each other.

One normally does not get quite so excited about pavement, unless one has just spent 45 minutes driving up the unpaved, rocky, hole-filled expanse that is the 17-kilometer portion of 606 between Guacimal and Santa Elena/Cerro Plano/Monteverde.

I freely admit that I, too, am delighted when the unpaved portion is behind me, but I’m also reminded that the much-discussed project to pave this portion of 606 is not something that makes everyone in the zone happy. In fact, it’s likely part of the three P’s to avoid in gatherings: prayer, politics and pavement. Drivers, brace yourselves - and other advice from seasoned Costa Rica travelers. Marshall Cobb / The Tico Times

How can something as seemingly benign as paving a road create such controversy? Based on the many one-on-one conversations I’ve had, I’m going to try and give you a carefully worded answer.

Let us start with the easiest group: those who want the pavement. Owners of most bars, restaurants and zip-line tours, along with other tour operators, are absolutely for paving the route, which would provide quicker, easier access for their clients (as well as increase the number of clients). Many locals who don’t own businesses are also vocal proponents as they too want a less punishing, safer ride.

Residents of the zone who don’t travel off the mountain or have a business, but do own a large amount of land, are also excited about the prospect of pavement. During my recent property search I was told on several occasions that I should buy now, as the owner expected the land to double or triple in value “once the pavement project is done.”

Aside from those who see financial gains and safer journeys, a large portion of the population is pro-pavement because they are against polvo (dust). During the dry season, the dust produced on the highly trafficked 606 obscures the view of the road, clogs the lungs of drivers (particularly those on motorcycles and quads) and coats the nearby vegetation to such a degree that, according to resident biologist Richard LaVal, “it creates a dead zone where nothing, not even insects, can live.” Pavement would indeed cut down on the dust. It would also likely help improve the health of residents who struggle with asthma as well as back ailments caused by the repeated use of the poor road.

Dr. Carolina Yep, who works in a local, private clinic, told me, “I myself had to receive treatment on trip back up to Monteverde last month because, with all the dust, I literally could not breathe.”

Dr. Yep also confirmed that “ambulance rides down the mountain for major emergencies are dangerous and inefficient. The current road is a threat to my life and the life of my teammates as well as our patients — who are primarily tourists.”

Lastly, businesses in the district have long blamed the bad road for higher prices on household and farm goods. Additional fuel, maintenance and time on the road are factors that no doubt affect the bottom line of stores in the area. Presumably, a fully paved route would result in a potential decrease in costs for consumers.

With all those factors in the yes column, who does not want a paved road? Here too it is complicated, but the primary reason is best captured by a quote from a successful local businessman who asked to remain anonymous. “I have all the business I need, even with the lousy road. The last thing we need here is more people.”

Just like those in favor of the pavement, the group against it comes from a cross-section of the community: Ticos, Gringos, Quakers, Catholics, newcomers, old-timers, and so on. Their view is that adding people to an area already experiencing issues with the water supply, trash disposal and development may generate growth, but that growth is going to come at the expense of the quality of life of residents, and the environment. This was the scene last year when a large portion of the hill just south of Santa Elena came loose and the road was closed until this one-lane channel could be dug through the debris. Picture from Tracey Cobb Tracey Cobb / The Tico Times

I hesitantly pointed out in a couple of these conversations that, in this view, my family and I, as new residents, were part of the problem. “Yeah, but you’re already, here so there’s nothing we can do about you.” A little honesty goes a long way.

Those opposed also state that each time one of the dirt roads in the area is leveled and repaired, drivers immediately and recklessly increase their speeds — with many driving in excess of what’s allowed or safe. Paving the treacherous, winding road up the mountain will, they believe, increase head-on collisions and fatalities.

Also on the topic of danger, those opposed includes residents who fear that improving the road will increase crime via improved access for potential thieves whose cars currently cannot manage the road. There are also those on the safety front who do not believe that the current road, with its steep slopes and potentially poor ballast, can safely be paved without a significant reworking of the existing road

The final group, which is likely a large percentage of the population, views paving the road as an inevitable, likely necessary evil. Many of my conversations with locals – business owners, workers in the tourist industry, day laborers, mechanics, gardeners and residents – ended with a variation of the idea that there are definitely things to like about the pavement project. There are also aspects, particularly those involving change, that may forever change the fabric of the community, perhaps not for the good.

I met with José L. Vargas Leitón, a member of the Monte Verde Roadways Commission, and he was kind enough to give me extensive background on the project as well as the various governmental entities and local groups involved. Per don José, discussions regarding the paving and improvement of the road “began a couple of decades ago.”

These discussions had several starts and stoppages and related protests. In addition to the Paving/Road Commission and the Municipality, the project includes entities such as University of Costa Rica’s National Structural Materials and Models Laboratory (LANAMME), the Ministry of Transport and Public Works (MOPT) and the National Roadway Council (CONAVI). Also per don José, “the project will soon move forward under the direction of Grupo Orosi, which was recently awarded the bid for the work.”

Questions still remain, particularly in regard to a stretch of the unpaved road known as “Kilometro 13,” located about 600 meters down from the San Luis junction. This portion of the road remains a curved, one-lane affair because of seismic activity roughly five years ago which opened a significant crack in the hillside above it. Expanding the road here comes with the potential risk of bringing down a portion of the hillside which, even without a geological fault, features high slopes and unstable material.

Grupo Orosi is still in the process of developing their plan to address Kilometro 13 but, according to don José, “the funds currently approved and allocated for the overall project — nearly $13 million — do not cover bridges, alternate routes or other significant workarounds that have been floated as solutions.”

And so, the larger community continues to wait. Those waiting often discuss the rumored sources for the delays. These rumors cover a lot of disparate ground. Some believe that the Quaker community will not allow a paved road, which is why the paved road in town ends at the boundary of the Monteverde community.

I spoke with several Quakers on this front, all residents in the zone for 40 or more years. All stated that their community has never even had a meeting on the topic. Further, the road in town which connects the Monteverde community with Cerro Plano and Santa Elena remains a dirt road in Monteverde not because the Quakers did not want pavement, but instead because that paving project ran out of money. They also pointed out that most members of their community were happy when the pavement process on the first leg of 606, from Sardinal to Guacimal, was completed about ten years ago. It is worth noting that no one I came across had objections to the Sardinal to Guacimal portion of 606.

Other rumors involve an agreement among the hotel owners to keep the road poor to avoid a situation where the zone is a day trip for travelers. I reached out to several hotel owners. One responded by saying, “There is no real evidence that having a paved road will change anyone’s length of stay. We view this as our responsibility and need to educate guests about all the great reasons to stay longer. Day trips have been around for a long time. They will continue.”

Rumors aside, the project is expected to begin soon. When it does it is likely prudent to heed the words of José Francisco Vargas, the Mayor of Monte Verde, who has long worked on behalf of the pavement project. Señor Vargas recently addressed a gathering at the 65th anniversary celebration of the Quaker School. He told the crowd that the road will soon be paved – and that he hopes all those who are eager for the new road understands that it will come with changes and challenges for the Monte Verde community.