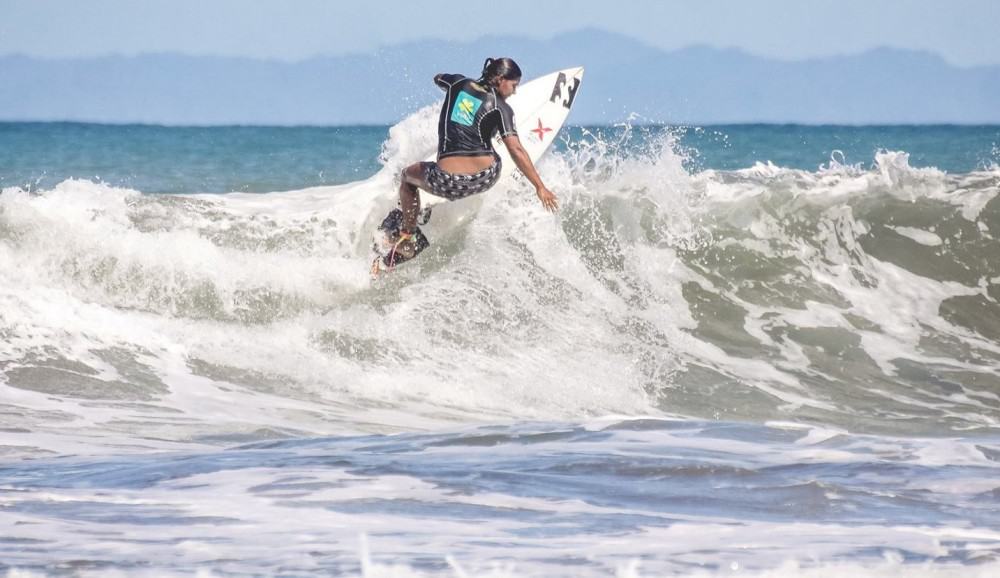 Lisbeth Vindas of the Costa Rican National Surf team rides a wave at Jacó, where a recent uptick in Zika cases may threaten the World Surfing Games in August. (Courtesy of Nadine Rosenburg)

In the last week, 13 more cases of the Zika virus have been reported in Garabito on Costa Rica’s Central Pacific, leaving the canton with 44 total cases, according to the Health Ministry.

The ministry has deemed the popular beach town Jacó as the “focal point” of the country’s ongoing bout with Zika. The spread of the disease comes at an especially troubling time, just months before Jacó is supposed to host the highly anticipated World Surfing Games beginning Aug. 6, in which hundreds of thousands of tourists and spectators are expected to descend upon the town.

Tobías Murillo, the mayor of the Garabito canton that presides over Jacó, told The Tico Times in a phone interview Thursday that the World Surfing Games will not be threatened by the growing number of Zika infections.

“I see no chance of it being cancelled,” he said. “We hope for this to all be resolved in the next few days.”

Murillo said the event, which has been declared a matter of national interest by the Costa Rican government, is expected to bring in “millions of dollars” from tourists coming to the games. In 2009, when Costa Rica hosted its first World Surf Games in Playa Hermosa of the same municipality, Garabito reported $1.5 million in spending from the 100,000 people who attended the event.

He said the municipality has been working with the Health Ministry by lending fumigation equipment, among other resources, as they try to stop the disease. The canton has reported 75 percent of the country’s total Zika cases. More than 1.2 million potential breeding grounds for the Aedes aegypti mosquito have been fumigated across the country, according to Costa Rica's Health Ministry. (Courtesy of the Health Ministry)

Murillo was critical of the role of the National Emergency Commission, which he said has been largely absent in helping out during the Zika spread.

“To me, they’re being irresponsible because this is something that legally falls to them,” Murillo said.

“This is a huge worry here right now and they’re obligated to support in some way,” he added. “But they haven’t collaborated with anyone.”

A spokesman for the National Emergency Commission said earlier in the week that it was limited in what it could do because all action and analysis of a national medical emergency must be done by the Health Ministry.

According to the Health Ministry, although three pregnant women have been diagnosed with Zika in the country, there have been no cases of microcephaly, a birth defect that researchers believe can be caused by the virus.

“This is obviously the biggest worry going forward for the World Games,” said Costa Rican Surf Federation spokesman Carlos Brenes. “But fortunately, it’s happening right now as opposed to months from now and the proper measures can be taken.”

The Costa Rican Surf Federation estimates that each year 400,000 tourists from all over the world come to Costa Rica to surf, investing more than $800 million into the country.

Costa Rica is looking to repeat as champions in this year’s edition of the games after having won the 2015 World Surf Games in Nicaragua.