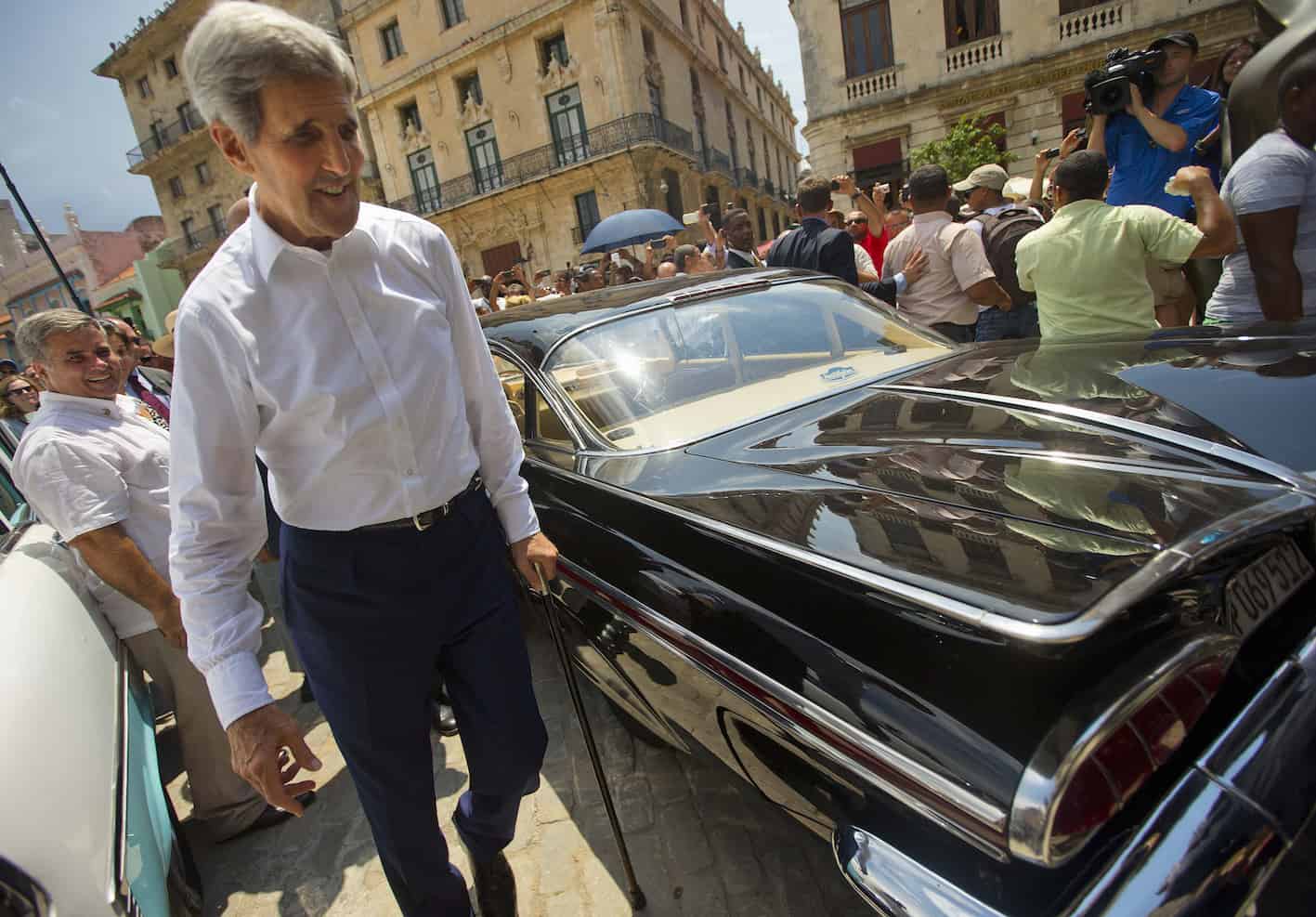 HAVANA, Cuba — The American flag was raised Friday over the U.S. Embassy in Havana beside the three Marines who last lowered the Stars and Stripes more than a half-century ago in a day of history-making symbolism as more Cold War vestiges were put to rest.

But the ceremonies led by Secretary of State John Kerry also underscored some of the significant differences as the two countries move ahead with their groundbreaking diplomatic thaw.

Kerry’s meetings in Cuba will include political activists — barred from the embassy event — who hope the new openings with Washington will offer more room for opposition voices on the island.

“As two peoples who are no longer enemies or rivals, but neighbors,” Kerry said in English and Spanish.”[It is] time to unfurl our flags, raise them up, and let the world know that we wish each other well.”

Minutes later, the Marines who lowered the flag in 1961 — then Sgt. Jim Tracy, then-Lance Cpl. Larry C. Morris and then-Cpl. F.W. Mike East — handed the flag to a Marine contingent. It was then hoisted as a band played “The Star-Spangled Banner” outside the seven-story embassy building, built in the early 1950s on the Malecón, Havana’s famous waterfront boulevard.

Another iconic image of Cuba was parked outside the embassy gates: three classic American cars from the 1950s including a 1959 Chevrolet Impala — the year Fidel Castro’s revolutionary forces took power. Hundreds of people — some waving Cuban and U.S. flags — gathered nearby under a blazing Caribbean sun.

The moment culminated history-making outreach that began with quiet diplomatic talks and then moved quickly since stunning announcements in December on plans to ease one of the last major fault lines from the Cold War.

Last month, Cuba’s foreign minister, Bruno Rodriguez, was in Washington to raise the island’s flag outside its embassy on the day both nations officially restored ties. But the U.S. flag in Cuba has been kept under wraps for the arrival of Kerry, the highest U.S. government official to set foot in the country since 1945.

Cuban officials, meanwhile, are likely to increase pressures on Washington to fully roll back its economic embargoes and open talks on the future of the U.S. military base at Guantanamo Bay.

“We remain convinced the people of Cuba would be best served by a genuine democracy, where people are free to choose their leaders,” said Kerry, who listed the now-buried remains of the Cold War: the fall of the Berlin wall, the collapse of the Soviet Union and ending wartime tensions in Vietnam.

Kerry said the United States and Cuba “have begun to move down that path without any illusions about how difficult our new relationship will be.”

“But we are each confident in our intentions, in the contacts we have made, and the friendships we have begun to forge,” he added in an address that quoted the 19th century Cuban nationalist hero José Martí.

President Obama’s inaugural poet, Richard Blanco, whose family left Cuba shortly before he was born in 1968, offered a reading of “Matters of the Sea,” a poem he has written for the occasion.

“What matters is this: We all belong to the sea between us,” he read with the backdrop of the Florida Strait, which was once the route for desperate migrants seeking U.S. shores just 90 miles away.

The U.S. embassy has been open for nearly a month, following the official July 20 re-establishment of U.S.-Cuba relations. Previously, the two nations maintained lower-level interest sections as diplomatic toeholds.

After the ceremony, Kerry plans to meet privately with Cardinal Jaime Ortega, the Roman Catholic archbishop of Havana. Ortega was instrumental, along with Pope Francis, in the success of nearly two years of secret bilateral negotiations that led to this day.

Later in the afternoon, a separate U.S. flag will be raised at the opulent estate in western Havana that is the once and future residence of the U.S. ambassador, currently occupied by Charge d’Affairs Jeffrey DeLaurentis. Members of Cuban civil society — including political dissidents — have been invited to that ceremony and to a reception Kerry will host.

In an interview Wednesday with CNN Español, Kerry rejected criticism Cuban government opponents were not asked to attend the morning events at the embassy.

“We just disagree with that. We’re going to meet,” he said. The embassy ceremony, “is a government-to-government moment. We’re opening an embassy. It’s not open to everybody in the country. And later we’ll have an opportunity where there is a broader perspective to be able to meet with … a broad cross-section of Cuban civil society, including dissidents,” he said.

Human rights, Kerry said in the interview, is “at the top of our agenda in terms of the first things that we will be focused on in our direct engagement with the Cuban government,” including his Friday talks with Rodriguez.

In a Thursday letter to Kerry, the organization Reporters Without Borders USA noted that Cuba ranks 169 of 180 countries on its press freedom index. “Cuba’s information monopoly and censorship practices do not apply only to local media,” it said, “foreign journalists are also subject to restrictions, receiving accreditation only selectively” and “deported” when they displease “the current regime.”

Despite the restoration of relations, the U.S. economic embargo against Cuba remains in place. Obama has called for Congress to lift it, along with remaining restrictions on U.S. travel to the island, but lawmakers have resisted.

The embargo continues to be a rallying point for the Cuban government. In an article published in Granma, the official Cuban Communist party paper, on the occasion of his 89th birthday Thursday, revolutionary leader and former president Fidel Castro criticized the United States for everything from dropping an atomic bomb on Japan near the end of World War II, to setting the stage for global economic crisis by amassing most of the world’s gold supply.

That crisis, Castro said, had battered Cuba’s economy, even as it is “owed compensation equivalent to damages, which have reached many millions of dollars” as a result of the U.S. sanctions.

Brian Murphy in Washington contributed to this report.