Police clash with demonstrators on hunger strike against corruption in Honduras 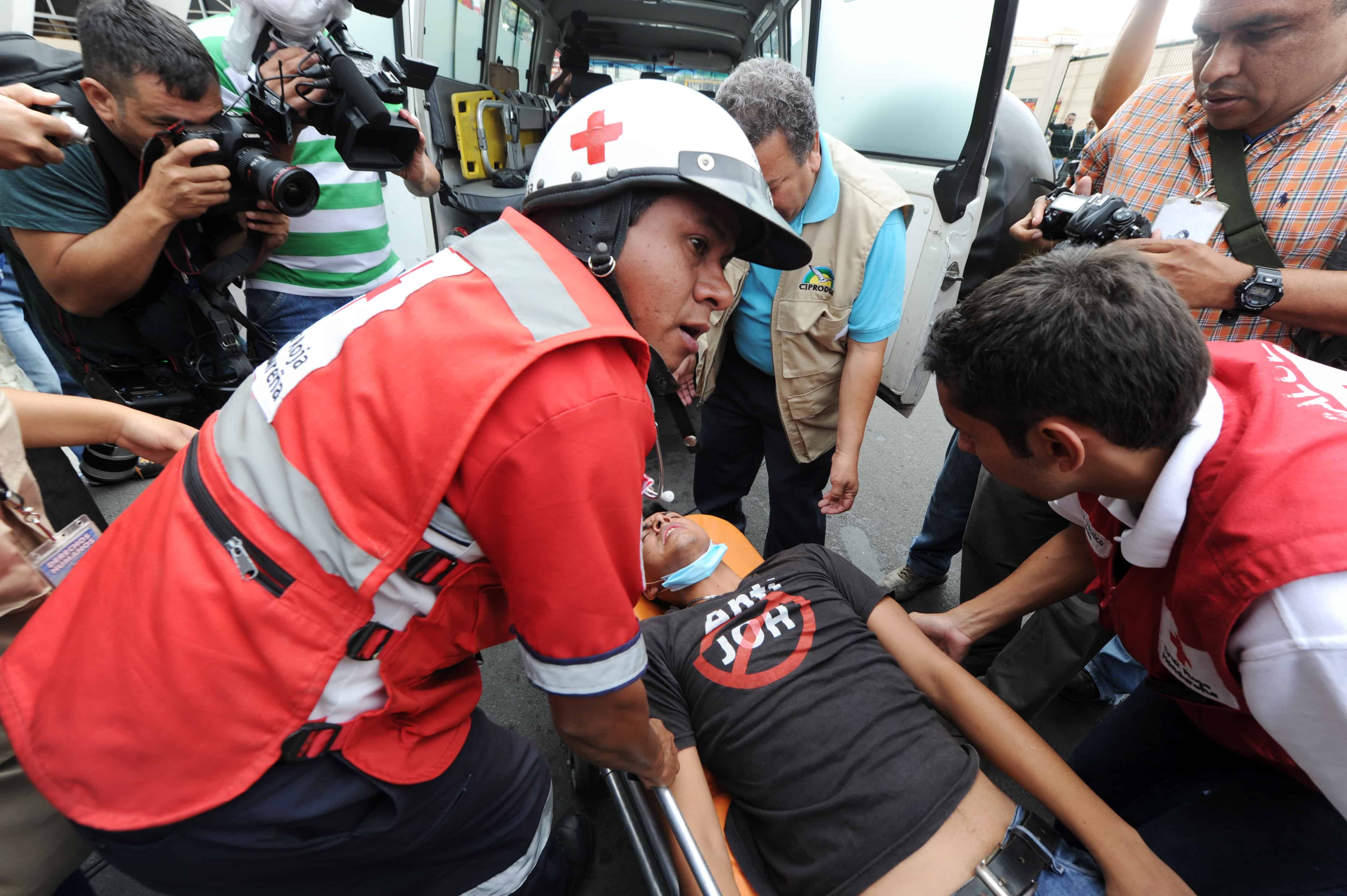 Red Cross members help a protester after he was hurt during clashes with the police in the surroundings of the Presidential Palace in Tegucigalpa, on July 16, 2015. At least 22 people on hunger strike, including Human Rights activist Wilfredo Mendez, demand the installation of an international commission against impunity in Honduras. (Orlando Sierra/AFP)

TEGUCIGALPA, Honduras — Hundreds of policemen used anti-riot shields Thursday to ward off 22 “indignant” hunger strikers who tried to approach the presidential residence (Casa Presidencial) in the Honduran capital to protest against corruption.

The protestors have remained in tents on the street leading up to the Casa Presidencial some 80 meters away, prevented from coming close by a police and military cordon, including steel and wire fences.

Thursday morning they tried to cross the security barrier to be closer to the presidential palace, but police blocked the way, hitting them with shields and threatening them with batons, which they did not used, AFP journalists verified.

An officer heading the 300-policemen platoon requested help from protest leader Wilfredo Méndez, director of the Center for Human Rights Investigation and Promotion, to avert the clash.

“Please, attorney, help us,” the officer pleaded with the human rights activist, trying to convince the protestors to refrain from moving toward the presidential residence.

“We’re not giving up on trying to get in,” Méndez replied. “Later or tomorrow or the day after we’re coming in. This house is ours.”

Méndez said Hondurans had a right to feel indignant over the massive social security fraud recently discovered in the country.

The opposition charges that Honduran PresidentJuan Orlando Hernández received approximately $90 million out of more than $300 million they say was skimmed from the country’s public health system for his 2013 election campaign.

The “indignant” movement, as protestors are calling it, began last May with massive demonstrations demanding the president’s resignation and the creation of a United Nations committee against impunity, similar to the one that has helped prosecute government corruption in Guatemala.

Hernández has said he found out through the investigation he ordered from the District Attorney’s Office that some $94,000 went to the campaign team that brought him to power.

The president has promised to combat corruption and impunity “no matter who falls,” and he has begun to seek support among different civil society groups, but the “indignants” have refused to take part.