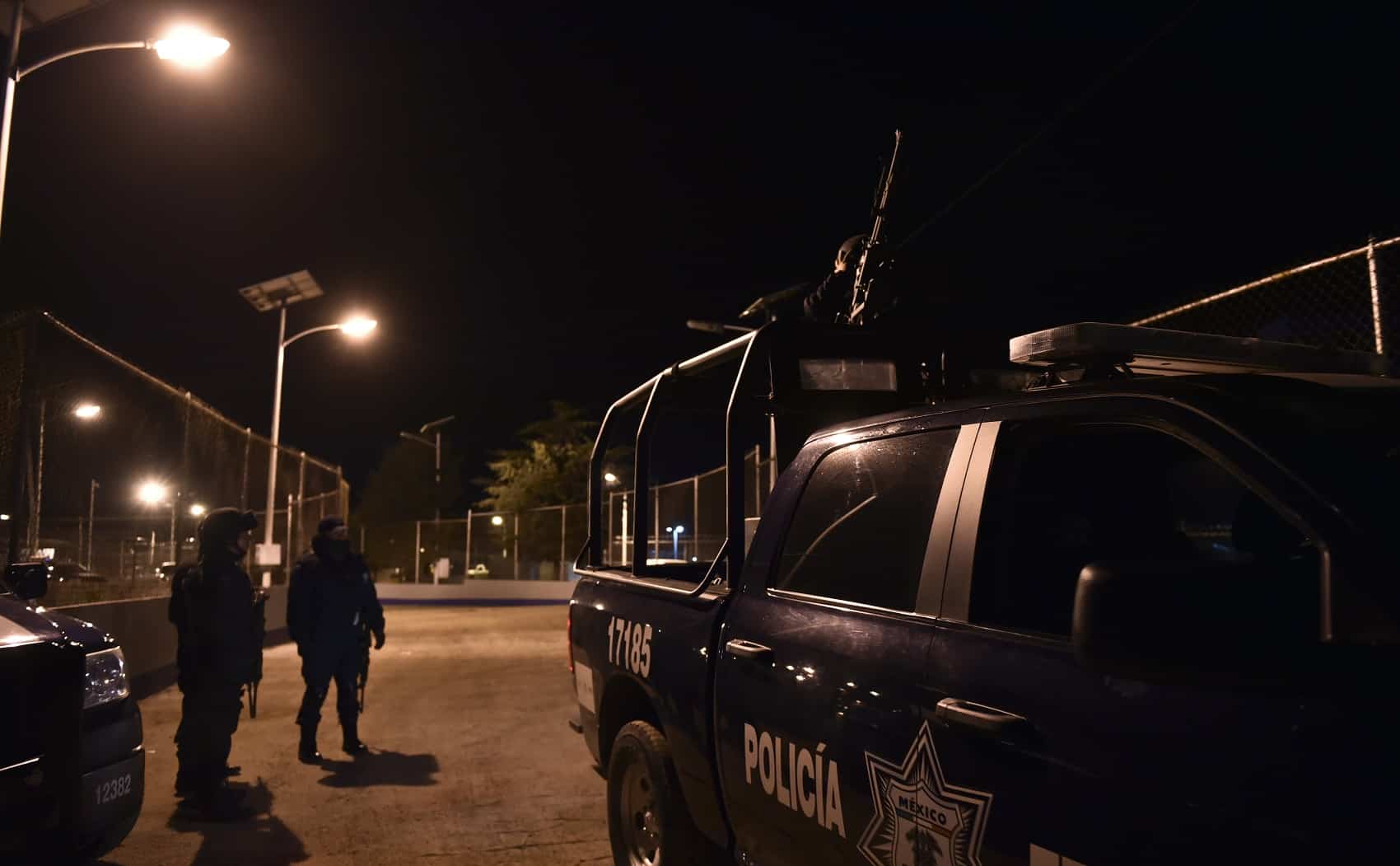 Federal policemen stand outside of the Altiplano prison in Almoloya de Juárez, Toluca, Mexico, from where Mexican drug trafficker Joaquín Guzmán Loera aka "el Chapo Guzmán" escaped on July 12, 2015. Mexican drug lord Joaquín “El Chapo” Guzmán has escaped from a maximum-security prison for the second time in 14 years, sparking a massive manhunt and dealing an embarrassing blow to the government. The kingpin was last spotted by security cameras entering the shower area of the Altiplano prison, 90 kilometers (55 miles) west of Mexico City, on July 11, the night before disappearing, the National Security Commission said. (Yuri Cortez/AFP)

MEXICO CITY — Joaquín “El Chapo” Guzmán, the world’s most famous drug lord, has escaped from a maximum security prison in Mexico for the second time in his drug-running career, a spectacular breach of security that set off a massive manhunt in the early hours Sunday.

For the past year and a half, the leader of the Sinaloa cartel had been incarcerated inside the Altiplano, a federal facility set amid farmland west of the capital that holds the top captured drug bosses and has been described as the country’s most impenetrable prison.

That all changed late Saturday night, when Guzmán slipped out of the prison through a rectangular passage in the shower area of his cell that led to a nearly mile-long tunnel running underneath the prison, according to Mexico’s national security commissioner, Monte Alejandro Rubido.

In a brief morning news conference, Rubido said that Guzmán was last seen inside the prison around 8 p.m. while receiving his daily dose of medication. After guards realized he had disappeared, they found the hatch that led by ladder down to the tunnel, which was illuminated, perforated with PVC piping for ventilation and equipped with an adapted motorcycle-on-rails to whisk the drug lord to freedom.

The escape of Guzmán is a staggering blow for Mexican President Enrique Peña Nieto, who had been building a strong reputation for arresting top drug bosses from all the major cartels. However, as his administration has succeeded in weakening some cartels, such as the Zetas and the Knights Templar, others are now ascendant, including the New Generation cartel in Jalisco.

But the failure to hold the country’s most important drug trafficker reveals the weakness of Mexico’s justice system and will add to the perception that the state has become so riddled with corruption that powerful criminals can in fact exist above the law.

The manner of Guzmán’s escape suggests that his rescue operation was well-planned and financed and may have occurred with the complicity of officials inside the prison.

Authorities put the Altiplano prison, located in the area of Almoloya de Juárez, in the state of Mexico, on lockdown after Guzmán’s escape. No one was allowed in or out and military and police deployed to the surroundings to search for the fugitive. Flights out of the nearby Toluca airport were grounded, Rubido said, to prevent him from leaving that way.

But in the Sinaloa Cartel, Guzmán still has a large and lucrative drug-running operation to welcome him back into the fold.

In February 2014, Guzmán was captured by a team of Mexican commandos while he was sleeping in the Miramar condominium in the beach town of Mazatlán. The arrest came after a series of military operations, which relied heavily on intelligence gathered by United States law enforcement officials, that led to houses with their own elaborate tunnel network in the Pacific Coast state of Sinaloa that Guzmán had used to evade capture for years.

Guzmán had risen to be the most-wanted man in Mexico and the leader of a massive drug-running operation with links in dozens of countries. He was arrested in 1993 in Guatemala but escaped from another Mexican maximum security prison in 2001, aided by prison guards.

The escape promises to be a major irritant in the relations between the U.S. and Mexican governments. American officials had pressed for Guzmán’s extradition so that he could be prosecuted for drug crimes and held in the type of facility where he would be more secure. But Mexican officials took it as a point of pride and national sovereignty that they could hold even drug traffickers as powerful as Guzmán in prison.

When it comes to drug tunnels, Guzmán’s Sinaloa organization is Mexico’s leading engineering firm. Since the 1990s, U.S. and Mexican authorities have discovered more than 100 drug-smuggling tunnels in Tijuana, Nogales and in other border cities, many as sophisticated as the one Guzmán allegedly used to sneak out of his cell.

The most sophisticated have their own lighting, ventilation and deploy little motorized carts or railcars to shuttle narcotics, weapons and cash back-and-forth. They typically start in a building on the Mexican side of the border and end in another structure on the other side. The tunnel-builders hide their materials and the earth they excavate within the structure on the Mexican side, or carry it out quietly, delicately charting their course beneath the surface to avoid detection.

Even with Guzmán in jail, his Sinaloa organization remained the dominant narcotics smuggling power in Mexico, with trafficking networks that spread across the United States. Guzmán’s cartel sends more cocaine and marijuana than any other into the United States, according to U.S. Drug Enforcement Administration officials, and it accounts for more than half of the heroin surging into U.S. communities as overdose deaths skyrocket.

Guzmán’s longtime business partner, Ismael “El Mayo” Zambada, was believed to have assumed operational control of the cartel after Guzmán’s arrest, though few in Mexico doubted that Chapo continued calling the shots from his maximum security cell. The group’s hideouts, safe houses and drug ranches span a vast area in the rugged northern Sierra Madre mountains, where men like Guzmán and Zambada are viewed by many as Robin Hood-like folk heroes.