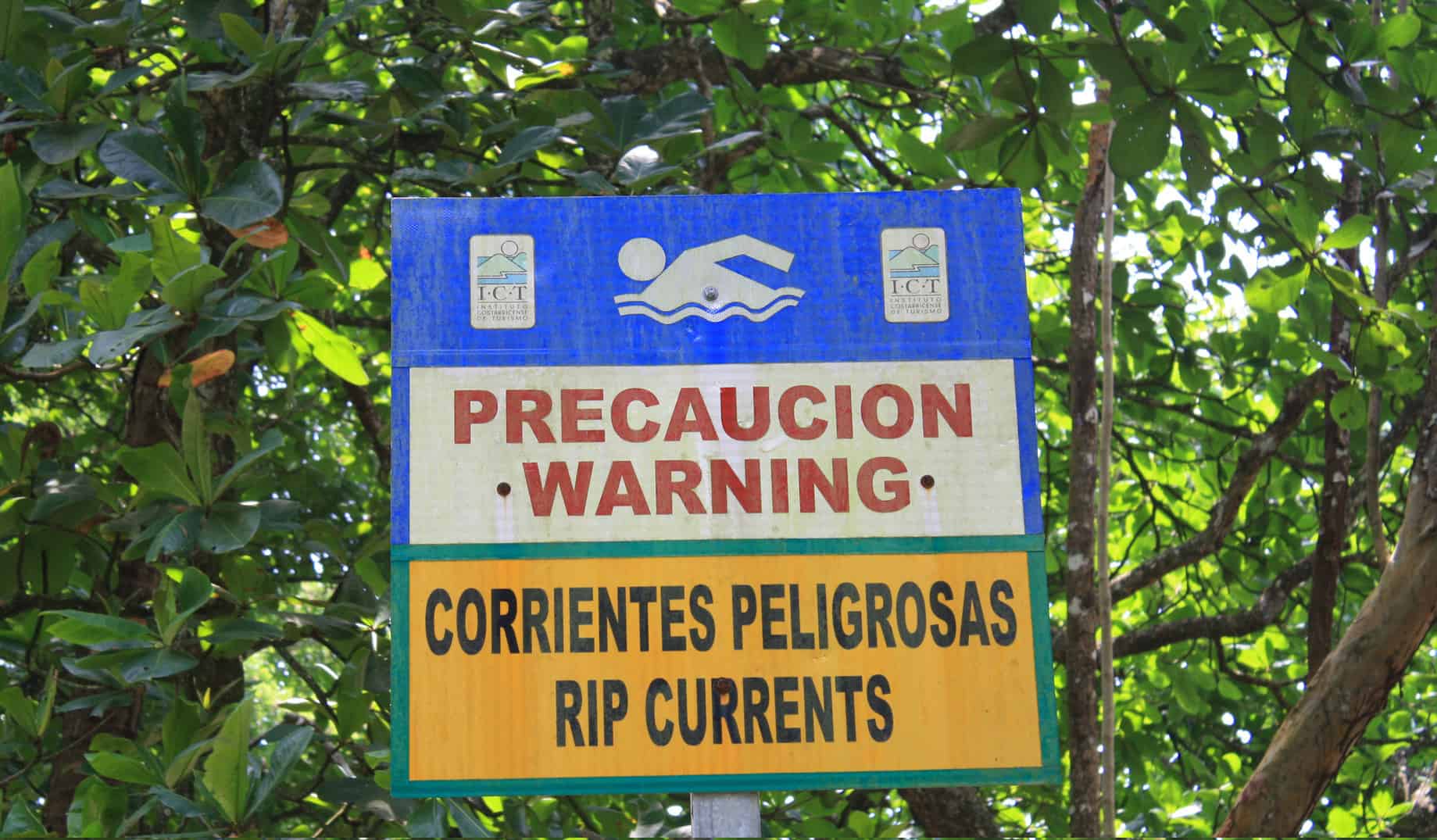 A sign warns of rip currents in a Costa Rica beach. Playa Cocles, in the Caribbean province of Limón, is one of the few beaches in Costa Rica that has a lifeguard tower. (Meg Yamamoto/The Tico Times)

The drowning deaths of 66 people on Costa Rica’s beaches so far this year – including two U.S. tourists in the last month – has experts calling for more lifeguards.

Costa Rica is known around the world for its picturesque beaches, but there are no laws that require lifeguards on its sandy shores, forcing local communities to scrape together the funds to train and employ their own. Without more resources for beach safety, experts say that preventable drowning deaths will continue.

During a lifeguard and water safety event in Tamarindo on Wednesday, International Ocean Institute (IOI) director Alejandro Gutiérrez said that Costa Rica has a very high number of drowning deaths relative to its size. Between 2000 and 2014, Costa Rica has seen an annual average of between 50 and 60 drownings, according to figures from IOI-Costa Rica at the National University.

Luis Hidalgo, president of the Costa Rican Lifeguard Association, said the problem comes down to a lack of financial resources and political will.

There is no law requiring lifeguards on Costa Rican beaches and there is no financial support from the government at this writing to pay lifeguard salaries. The association has trained more than 900 lifeguards since its inception in 2000, but scarce resources make it difficult to employ lifeguards full-time. Some local municipalities or businesses have banded together to pay for lifeguards, but many public beaches go unsupervised save an occasional warning sign at the beach, he said.

“The response of the authorities has been minimal, very little. They think that a couple signs are going to save lives,” Hidalgo said.

Even some beaches where communities have lifeguards, like Jacó, on the central Pacific coast, the guards are stretched too thin to effectively survey the water for trouble. Hidalgo said that busy beaches like Jacó or Manuel Antonio should ideally have one lifeguard for every 200 meters of shoreline.

More than 45 people have been trained as lifeguards and emergency responders in Tamarindo by the Lifeguard Association. Local businesses Witch’s Rock Surf Camp and the Patagonia Restaurant donated money for lifeguard salaries and towers, according to Hernán Imhoff, president of the Tamarindo Chamber of Commerce and Tourism.

Imhoff said that they decided lifeguards were the most effective way to curb accidental deaths at the popular tourist beach in combination with signs and flags to warn bathers about conditions before they enter the water. Prevention, he said, is just as important as rescue operations.

Imhoff said that safety should be part of Costa Rica’s comparative advantage when it comes to attracting tourists over Nicaragua or Panama.

The lack of supervision on Costa Rica’s beaches can also be a liability for businesses. In June 2006, three U.S. high school students and one of their instructors drowned on a trip organized by EF Travel while swimming at an unguarded beach in Palo Seco, Parrita. The families of the deceased students filed a $6 million wrongful death suit against the Massachusetts-based company in 2008, alleging that the company did not take safety precautions despite the fact that it knew of dangerous rip currents in the area.

Hidalgo said that until the Health Ministry gets serious about providing resources for more vigilance and emergency response on the country’s beaches, he would focus the organization’s efforts on training lifeguards and water safety education.

“We can have 10,000 trained life guards, but without the resources to pay them to be out on the beach every day, it won’t make a difference,” he said.