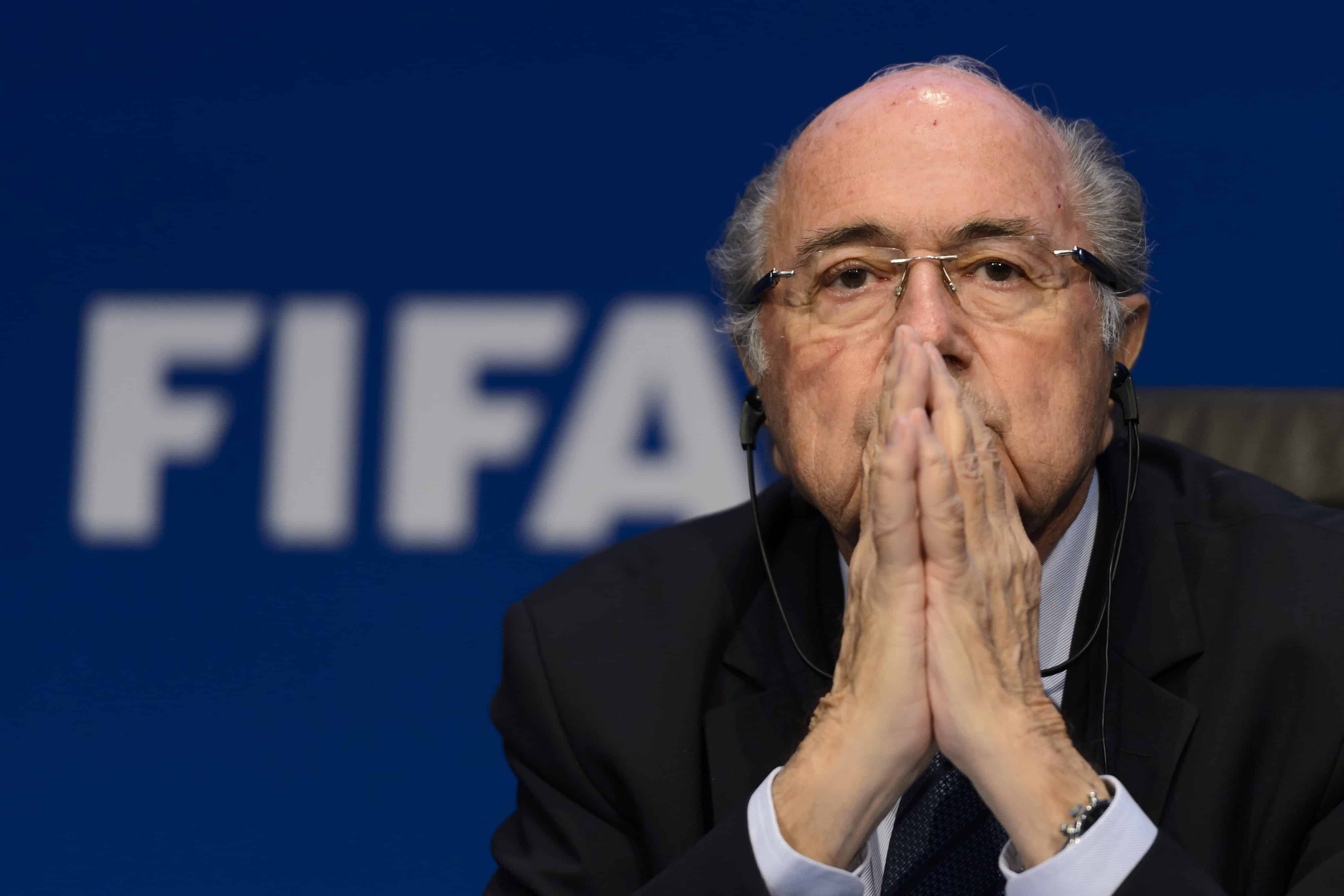 Suspended FIFA President Sepp Blatter attends a press conference on May 30, 2015 in Zurich, after being re-elected during the FIFA Congress. (Fabrice Coffrini/AFP)

ZURICH, Switzerland – FIFA President Sepp Blatter expressed shock Saturday at the tactics used by the U.S. anti-corrupton investigators but insisted he was not a target.

The 79-year-old Swiss official, on the offensive after being re-elected to a new term on Friday, also slammed what he called a “hate” campaign by European football leaders.

Blatter said he suspected the arrest of seven FIFA officials in Zurich on Wednesday under a U.S. anti-corruption warrant was an attempt to “interfere with the congress” that returned him to power.

“There are signs which cannot be mistaken: the Americans were candidates for the 2022 World Cup and they lost,” he told Swiss television channel RTS. “I am not certain, but it doesn’t smell good.”

He described the United States as the “No. 1 sponsor” of Jordan, home country of his challenger for the FIFA presidency, Prince Ali bin al Hussein.

The Jordanian prince, who had the backing of European football body UEFA, withdrew from Friday’s race after the first round of voting.

See also: How the US can arrest FIFA officials in Switzerland

The seven arrested officials were all detained for corruption cases in North and South America and Blatter said they could have been arrested on their home territory or at a FIFA executive committee six weeks ago.

He also condemned comments about FIFA made by senior members of the U.S. judiciary, including Attorney General Loretta Lynch, who lamented the “rampant, systemic and deep-rooted” corruption in football. Another official spoke of a “World Cup of fraud.”

“Of course I am shocked,” Blatter responded. “I would never as FIFA president make comments about another organization without being certain of what has happened.”

U.S. authorities have so far indicted 14 people, including the seven held in Zurich, on charges of involvement in $150 million of bribes for sports media contracts. They include two FIFA vice presidents.

A senior U.S. legal official has said more indictments are likely in the case.

Blatter said he had been “affected” by the scandal that has hit FIFA, but denied he was the FIFA official that U.S. investigators say authorized a $10 million payment to a disgraced former FIFA Vice President Jack Warner.

“I have been affected by what has happened and I have been hurt by the attacks,” he said.

The U.S. indictment says in 2008 a “high ranking FIFA official” authorized a $10 million payment to Warner, a former head of the North and Central American confederation, which was money intended as a bribe.

Blatter said: “I don’t go into these allegations. If such a thing is under investigation let it go [on], and definitely that’s not me.”

Forgive but not forget

“It is a hate that comes not just from one person at UEFA, it comes from the UEFA organization that cannot understand that in 1998 I became president,” he added in the interview.

Asked whether he would forgive Platini, Blatter said “I forgive everyone but I do not forget.”

European football leaders expressed concern at Blatter’s win and have hinted they could take new action against FIFA.

Platini has said UEFA will review relations with FIFA on June 6.

English Football Association Greg Dyke indicated England could be ready to back a European boycott of the World Cup.

An English vice president of FIFA, David Gill, refused to take up his place on the executive committee on Saturday because of Blatter’s victory.

“I think that they are currently poles apart. The only thing that can help is to communicate,” Beckenbauer told Germany sports news agency SID, an AFP subsidiary.

“They need to talk fast. Because what is happening is detrimental not only to the federations but also for football,” Beckenbauer added.

But even Prince William, second in line to the British throne and president of the English FA, waded into the controversy calling on FIFA to “show that it can represent the interests of fair play and put the sport first.”

He called on sponsors and other backers to apply pressure on football’s governing body.

Sponsors and government leaders have hammered FIFA over the corruption scandal.

FIFA sponsors Coca-Cola, Budweiser and McDonald’s called after the election result for quick moves to transparency.

Credit card giant Visa has threatened to “reassess” its sponsorship if FIFA does not clean up its act.

Blatter said he was organising a personal visit with sponsors in a bid to reassure them.