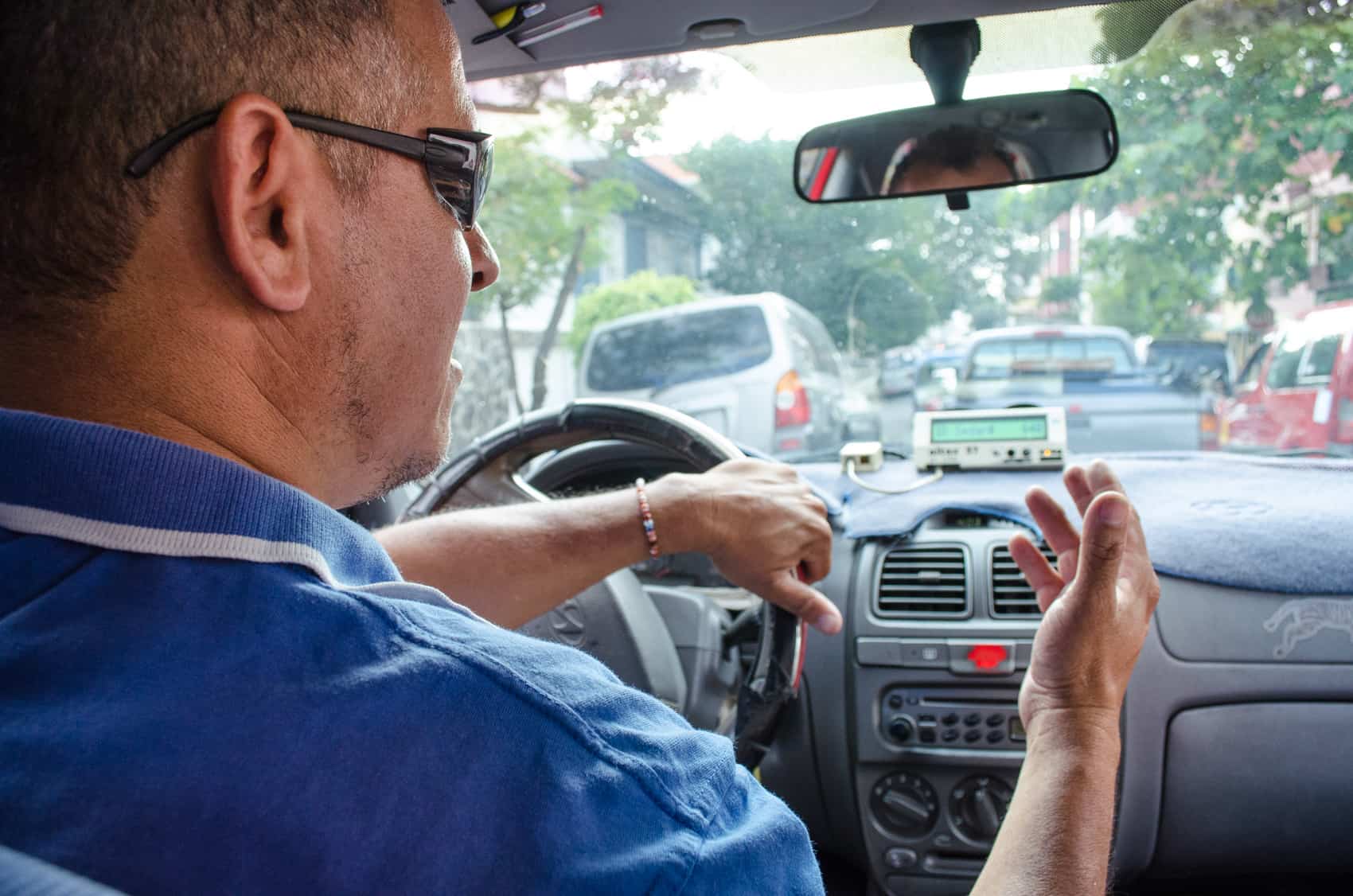 Recommended: Costa Rica, The Quiz – How much has your adopted country changed you?

My decade in Costa Rica has been guided, sustained and enlivened by a long-term relationship spanning almost the entire period. Like most any relationship, it’s had its ups and downs, but it’s also been there for me through thick and thin, through rainstorms and heartbreak. As February, the month of love, came to a close, I found myself reflecting on 10 years of heart-to-hearts and steadfast friendship.

Oh, I’m sorry. Did you think I was talking about my husband? I could say any of those things about him, too, but I’m referring here to my friends the taxistas: the armchair (or driver’s-seat) philosophers and politicians, the distinguished and the mulleted, the reserved and the jovial. They’ve held my hand – figuratively speaking, of course – through many a learning curve, and taught me almost as many dichos, refranes and obscure street addresses as my husband himself.

My love for taxistas is not universal. You roll the dice whenever you close one of those oh-so-fragile (don’t ever, ever slam them!) red doors, just as they roll the dice when picking up a new client. There’s plenty not to love: the reggaetoneros who slouch way down under the weight of their chains and scoot so far back that no one can sit behind them without yogi-style contortion; the ones who call their entire families, text incessantly, or watch movies while driving; the ones who act as though they have a personal vendetta against everyone else on the road, which they very well might; the ones who sigh as if you’re asking them to break a $100 when you provide a ₡2,000 bill for a ride costing ₡1,500. (The subtleties and profound annoyances of taxis and change could inspire many columns.) Rather memorably, there was the guy who, as the cab pulled away into the street, said, “Thank God you hailed my taxi just now. You saved me from going to jail this very night.”

An opening line like that one requires an answer, so I obliged. “Oh, yes? How’s that?”

He explained that when I flagged him down, he had been on the way to murder his boss. (If you think that that should have prompted me to ask to be let out of the taxi at once, then you clearly haven’t spent much time in San José.) Apparently, the taxi driver and his beloved wife of 15 years had five children, the youngest of whom had a congenital disease and desperately needed a special formula. He had asked his boss to pay him his salary just two days early so he could buy the formula and save his baby’s life, but the coldhearted taxi Mafioso refused. I didn’t believe him, but found the story impressive enough that at the end of the ride I gave him a little extra “for your son.” It was worth every colón when, a month later, I found myself once more in the same driver’s taxi. He clearly didn’t recognize me.

“Thank God you hailed my taxi just now,” he said. “You saved me from going to jail this very night.”

“I did?” I asked in amazement. “Tell me more!” I enjoyed myself immensely, stringing him along throughout rush-hour traffic that would otherwise have been interminable, before finally observing that it was very strange that the baby who one month earlier had been a three-month-old boy, was now a two-month-old girl, and that his five children had become three. I suggested that a man with such a cruel boss and, apparently, multiple wives and disappearing children, might want to stop procreating quite so vigorously. We spent the rest of the ride in very pleasant silence.

So, there are taxistas and there are taxistas. But on the whole, I love the river of amiable, chatty, and well-informed men who have carried me around the city day after day and week after week. When I was a reporter, I never wasted a cab ride. I’d always give the address and, in the next breath, ask his opinion of the bill I’d just learned about or the politician I’d just interviewed. I was rewarded with seas of information, some questionable but most very useful, about corruption, dalliances, promises unfulfilled. I heard just about every opinion under the sun, but almost always with the same basic yearning for a safer, fairer, cleaner Costa Rica – with, of course, better roads.

As the years went on, the conversations got a bit more personal, as if the taxi drivers who were shuttling me were a single person I was getting to know over time, and not hundreds of different men. Maybe I was feeling more comfortable in my new home; maybe the years in Costa Rica were slowly loosening my reticent Yankee tongue. Regardless, I usually learned much more than I told. Late-night rides are conducive to confessionals, although the shared pain of a rush-hour odyssey can make fast friends of anyone. I had surprising chats about love, parenthood, infertility, adoption, divorce, death. One man told me about how he came home one night to find all of his belongings on fire on the street. Another, as we listened to Puccini, told me about his lifelong dream to go to the Metropolitan Opera House in New York.

Most of all, I learned about language. Showing admiration for one turn of phrase was a sure way to elicit a deluge of instruction. One man waxed poetic about his wife, and asked whether I had found my media naranja – my half-orange. I could infer what this meant, and was charmed. I instantly pictured two half-oranges rolling around the street, looking for each other, straight out of Plato. “I love that,” I said. “How else do Costa Ricans talk about love?”

A half-hour later, I’d heard about everything from “the light of my eyes,” to “the sun of my spring,” to tal pa’ cual (this for that – kind of like “two peas in a pod”), to my all-time favorite: la horma de mi zapato. “Horma” is the figure a shoemaker uses to shape or reshape a shoe. It’s a way of saying you’ve found your perfect fit, but I also love the idea of a shoe coming home, bedraggled and misshapen, and draping itself over a nice sturdy wooden shoe-tree like the ones my dad used to use. That’s marriage for you: Sometimes you’re the bedraggled old shoe, and sometimes you’re the sturdy shoe-tree, and you try to avoid both being the old shoe at the same time.

That evening, as I got ready to head home from work, I realized with a curse that I’d left my frumpy walking shoes in that man’s taxi. They were too old and cheap to warrant calling the cooperative and tracking down the driver, but it meant that I wouldn’t be able to walk home from work, since I could no more make that trek in my heels than I could fly. I had an outrageously annoying commute home that night, hobbling in my office shoes through the rain, sitting on a series of steamy buses, then plunging into a giant puddle when I finally reached my neighborhood. I felt low, lonely and homesick, as I do whenever San José shows me its claws.

I walked up to our garden gate, opened it and went in. There, bedraggled and misshapen, were my walking shoes. Clearly, the taxi driver had found them at some point of the day, realized that only one woman in his daily labors could possibly be gigantic enough to wear such boats, remembered my address, came by and tossed them over the fence, with enough skill to make them land under our outdoor table so they wouldn’t get too wet in the rain. All I could think was: la horma de mi zapato. The form that shapes and reshapes us can be a partner, a child, a parent, a friend. It can be a whole country. It can be a kindly confederacy of taxi drivers, whose wit and wisdom can salvage the grumpiest day.

Katherine Stanley Obando is The Tico Times’ arts and entertainment editor. She also is a freelance writer, translator, former teacher and academic director of JumpStart Costa Rica. She lives in San José. Read more from Katherine at “The Dictionary of You,” where she writes about Costa Rican language and culture, and raising a child abroad. “Maeology” is published every other Monday.