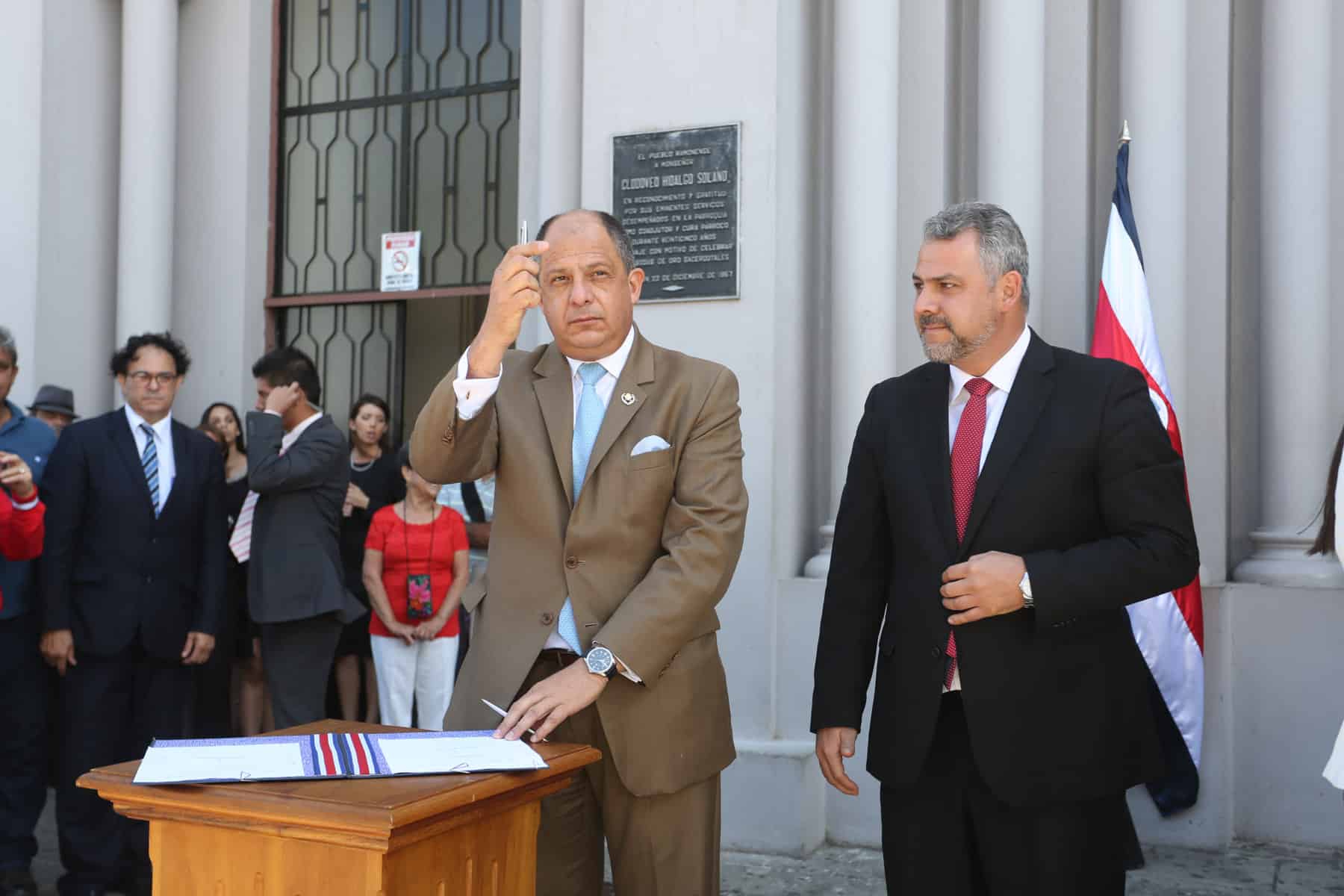 The project promises to expand the highway to eight lanes in some sections, easing traffic woes on the congested section of the Inter-American Highway for commuters, businesses and foreign visitors traveling to and from the airport. The expansion has long been listed as the most critical infrastructure investment in the country.

Monday’s signing ceremony in San Ramón was also a victory for opponents who had battled to revoke the original concession granted to the Brazilian contractor OAS. They said that contract was too expensive and the result of backroom deals.

The law Solís signed creates a trust funded with the profits from state agencies, like the National Insurance Institute, public banks and pension operators, to finance the $473 million price tag for the expansion. That price is $51 million less than the original $542 million proposed by OAS in its bid.

Alongside Public Works and Transport Minister Carlos Segnini, Vice President Ana Helena Chacón and a collection of lawmakers, Solís said that the highway expansion would be the first in a series of important infrastructure projects that the country needed to launch, including an electric train in the San José Grater Metropolitan Area and a highway expansion to Cartago, among others.

The project will expand the traffic-choked section of the Inter-American highway between San José and Juan Santamaría International Airport to eight lanes, and to four lanes from the airport to San Ramón. The tolls along the 58-kilometer distance between the capital and San Ramón will total 3,500 colones ($6.50) round trip. Some 84,000 drivers are expected to use the highway every day, the daily La Nación reported.

A map with the highway expansion between San José, Juan Santamaría International Airport and San Ramón, Alajuela. The purple section will expand to six lanes; the turquoise to eight lanes; and the red section to four. (Courtesy Casa Presidencial)

The original OAS concession was supposed to offer a cash-strapped government the ability to expand the highway with no money down. But citizen groups, most notably the Foro de Occidente, lambasted the project, alleging that the deal was opaque at best and corrupt at worst.

Facing sustained protests over the higher tolls and perceived conflict of interest within her administration, Chinchilla announced that the government would annul the road concession to OAS in April 2013. In March 2014, the government settled with the Brazilian contractor, agreeing to pay the contractor $35 million in damages.

The law signed Monday by President Solís was the result of a proposal put forward by the Foro de Occidente and negotiated with the government. Solís celebrated the group’s efforts as a paragon of democratic organization.

“The symbolism of San Ramón goes far beyond just a highway. This is an extraordinary canton in terms of the social movements of this country,” Solís said to a crowd in San Ramón. “Sovereignty lies with the people and it’s the people who give their leaders to right to govern.”

The San Ramón expansion was not the only major infrastructure project that moved forward in Costa Rica on Monday. Lawmakers approved another major financing deal for a $395 million Chinese loan to fund the lion’s share of the $465 million Route 32 highway expansion between San José and Limón.