Will the Nicaragua Canal ruin the ‘Galapagos of Central America’? 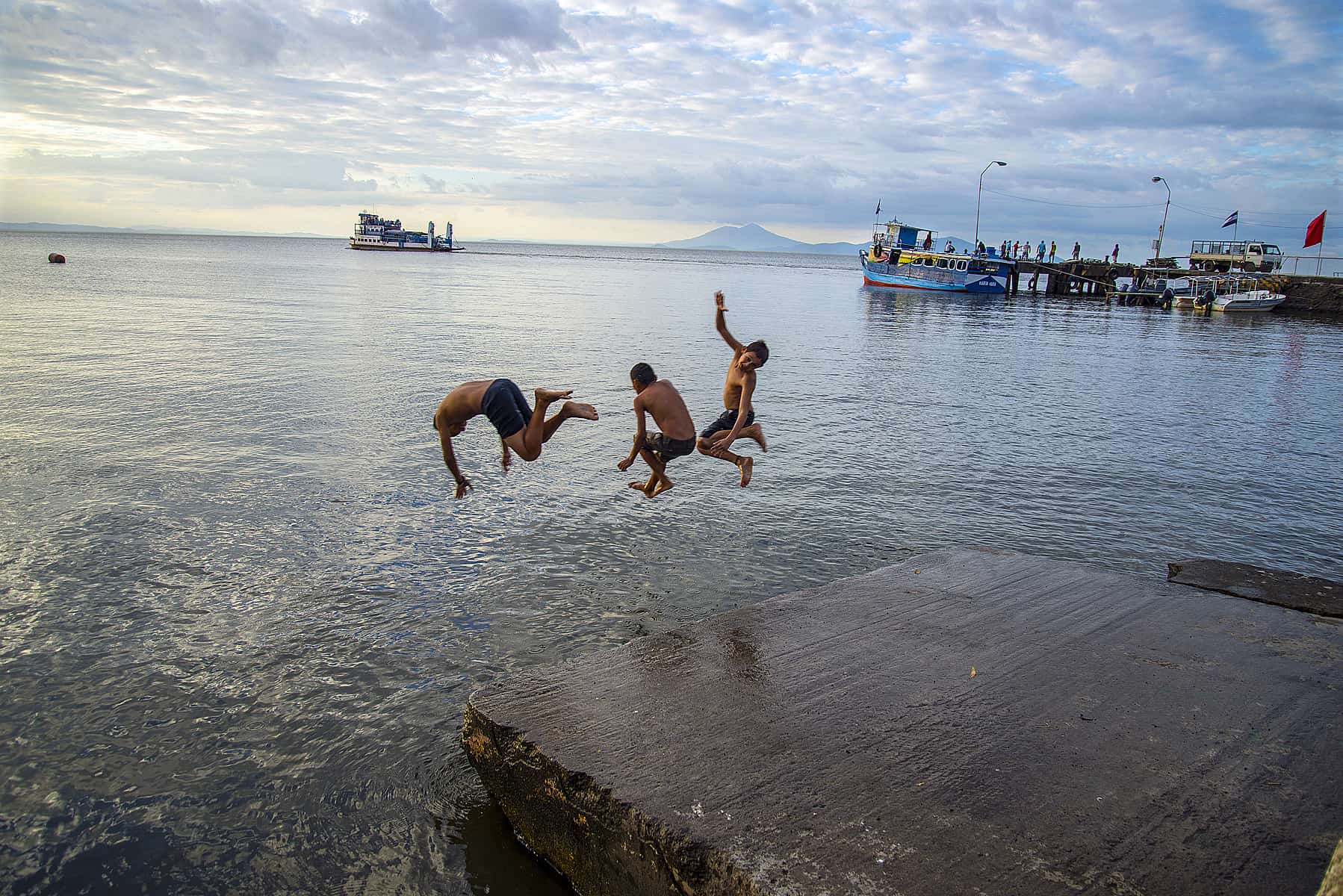 Three boys simultaneously jump into the water of Lake Nicaragua, also known as Lake Cocibolca, from a pier in the harbor of Moyogalpa, Isla de Ometepe, Nicaragua, on Jan. 16, 2015. In the background a ferry is headed to the mainland. (Photo by Teake Zuidema)

MANAGUA, Nicaragua – According to documents from the Chinese company HKND Group, 106.8 kilometers of the planned interoceanic Grand Canal of Nicaragua will go through Lake Cocibolca, also known as Lake Nicaragua, the largest freshwater body in Central America.

The World Bank calls this lake the “Galapagos of Central America” because of its great biological diversity. The canal – if it is ever made – will enter the lake from the west – south of San Jorge – then cross the lake four kilometers to the south of the volcanic island of Ometepe. It then will hit the eastern shore eight kilometers south of San Miguelito.

The shipping channel in the lake must be 29 meters deep and 280 meters wide so that the largest container ships, bulk carriers and oil tankers in the world can use it. However, Lake Cocibolca is shallow. There are some deep areas, but on average, the lake is no deeper than nine meters. For that reason, HKND plans to dredge 715 million cubic meters of material from the bottom of the lake, possibly the biggest dredging job ever. In comparison, all dredging and excavating in the 100-year history of the Panama Canal has removed a total of 550 million cubic meters of material.

And that’s not all.

“Lake Cocibolca has very strong currents that will make recurrent dredging necessary to keep the shipping channel open,” says Pedro Álvarez Alvarado, the Nicaraguan chair of Civil and Environmental Engineering at Rice University in Houston, Texas. “All that dredging will bring sediments from the bottom back into the water. These sediments can be contaminated with pesticides and mercury. They also contain organic matter that will stimulate eutrophication in the water.”

Eutrophication happens when excessive amounts of nutrients stimulate the growth of plant life, mostly algae, and through lack of oxygen and light, kill fish and animals.

Is it possible to minimize the negative effects of dredging?

“Yes,” says Wim Klomp, an engineer from the Dutch company HaskoningDHV who led a pre-feasibility study for the canal at the request of HKND. “With modern dredging equipment you can minimize turbidity. However, the use of these techniques slows down the whole dredging process considerably. Also, if there’s pollution in the sediment, you have to determine exactly what it is and where it is before you start dredging.”

Klomp adds: “Chinese dredging companies don’t have a good reputation for minimizing turbidity, and are for that reason banned from working in Australia.” An excavator and a bulldozer work on Jan. 15 in the harbor of San Jorge, Lake Cocibolca, Nicaragua, where the ferries to Ometepe leave. This harbor needs to be enlarged so that equipment for the construction of the Nicaragua Canal can be transported from here. In the background, Ometepe's two volcanoes, Concepción and Maderas. Photo by Teake Zuidema

How clean is the lake anyway?

In 2013, the World Bank published a report stating that Lake Cocibolca contains very high levels of sediment – every year the lake absorbs from 10 to 25 million tons. This number is high because much of the lake’s watershed has lost its forest coverage to agricultural activities and cattle farming. That loss of vegetation stimulates erosion in the watershed. And the sediment from agricultural areas contains high levels of nitrogen and phosphorus that cause unhealthy algae growth.

Among other sources of contamination is the discharge of untreated municipal and industrial wastewater and the waste from commercial farming of tilapia, a non-native fish species.

The World Bank made another important observation: Although only 20 percent of Lake Cocibolca’s watershed is in Costa Rica, this area is responsible for 75 to 84 percent of all sediments that enter the lake in a given year. If Nicaragua wants to have lower sediment loads and prevent the future channel from filling in, it better work with Costa Rica. The most efficient way to reduce the influx of sediments would be erosion control and reforestation on the mountainsides of the northwestern Costa Rican province of Guanacaste.

But don’t blame Costa Rica for everything. The huge majority of nitrogen and phosphorous in the water comes from Nicaragua, not from the south. "NO AL CANAL" is written on a wall on the main street of Moyogalpa, Ometepe, Nicaragua. The majority of the inhabitants of the island vigorously oppose plans for a massive interoceanic canal that will cut through Lake Nicaragua, also known as Lake Cocibolca, just south of their island. Photo by Teake Zuidema

HKND’s engineers are aware of this stream of sediment from Costa Rica into Lake Cocibolca. HKND’s map of the canal project shows an underwater dam along the full length on the southern (Costa Rican) side of the shipping channel. This dam, no higher than three meters above the bottom, will be made from the heaviest sand and rocks that will be dredged up from the bottom. This material has to go somewhere, and it will help reduce the flow of sediments from Costa Rica into the freshly dug shipping channel. It also will minimize the amount of maintenance dredging required to keep it open.

‘For all the gold in the world’

“We will not risk Lake Cocibolca for all the gold in the world,” Daniel Ortega said in 2007, shortly after he became president of Nicaragua. Only a few years later, El Comandante concluded that the lake already was so seriously polluted that the canal hardly could make it worse.

The World Bank is somewhat ambivalent. On the one hand, its report mentions considerable threats to the lake’s health by sediments laden with nitrogen and phosphorous. On the other hand, it states that more research is needed to determine whether eutrophication already is occurring in some places.

Maura Madriz Paladino, an ecologist at the Alexander von Humboldt Center in Managua, vigorously fights the idea that the lake is in very bad shape.

“It is clear that there is some pollution, mostly very local, and that the Nicaraguan government is not investing enough to stop polluted sediments from entering the water,” Madriz Paladino says. “But, if you look at the large volume of water, then the pollution is really minimal. That’s the reason two cities – San Juan del Sur and Jinotega – can take their drinking water from the lake.”

Madriz Paladino sees the canal as a huge threat to the health of the lake and the environment in Nicaragua. “This is the largest body of freshwater in Central America. In the future more people will need it for drinking water and Nicaragua can use it for irrigation.”

What bothers her most is the lack of transparency in the project: “It is hard to say what the effects of the canal will be, if HKND and the government don’t tell us exactly what their plans are. It is very disturbing that the company hasn’t published an environmental impact study while they’ve already began preliminary projects.” Four girls and a young boy hold up a net and dump it in the muddy water along the shores of Lake Nicaragua as they fish for sardinas on Jan. 17, 2015. Photo by Teake Zuidema

HKND plans to build a factory in Nicaragua to produce the explosives needed for the blasting and digging of the canal through dry land. Kwok Wai Pang, deputy director of construction for HKND, said in December 2014 at a presentation in Managua that the company doesn’t plan to use explosives in Lake Cocibolca. The company will use other, unspecified, methods. Madriz Paladino and others doubt whether it is possible to remove heavy rock, such as basalt, from the bottom without explosives. The use of explosives would do more damage than dredging possibly could.

The heavier material from the bottom, rocks and sand, will be used to build the underwater dam along the channel. What about the rest of the dredged material, the lighter clays and silts?

“In our study we recommended to use these to create islands in the lake with tourism facilities,” says Wim Klomp. On the map that HKND published are two Dredge Disposal Areas visible in Lake Cocibolca. It is not clear if these artificial islands will have a purpose once the water has evaporated and percolated through the dike that surrounds it.

Madriz Paladino is very concerned about changes in the water level that would affect the existing infrastructure along the shores of the lake. There was speculation HKND could create a higher water level in the lake, which would mean less dredging, by building a water control structure in the San Juan River, the only outlet of Lake Cocibolca to the sea. This would, undoubtedly, have created a fresh conflict with Costa Rica. However, in HKND’s plan there is no sign of such a control structure. It remains possible that changes in the hydrology of the lake will affect the water flow through the San Juan River.

Another concern is salinization, which happens when seawater enters the lake as huge ships move through the biggest lock chambers in the world, from ocean level to the lake at 32 meters above sea level.

“Yes, salinization can be a problem,” says Wim Klomp, “but there are remedies, too. Salt water is heavier and, therefore, it sits under the freshwater in the lock chamber, and it can potentially be pumped away and replaced by freshwater.”

Deltares, a Dutch company with a lot of experience in this area, is designing a system for salinity management in the locks.

Last, but not least, there is a chicken-and-egg dilemma: How do those large, modern dredging vessels get into Lake Cocibolca to dig a canal when there’s not yet a canal for them to sail through into the lake?

Of course, the answer is: They don’t. Only smaller dredging vessels will be able to sail up the San Juan River and into Lake Cocibolca. Other dredging equipment will, if possible, have to be transported overland to the lake. (There’s already a project going on to enlarge the harbor of San Jorge for this purpose.) Given the amount of dredging work that needs to be done, this all but guarantees the canal will not be completed in the five years HKDN has suggested.

Teake Zuidema is a Dutch journalist and photographer living in U.S. city of Pittsburgh. He specializes in science and environmental stories. See more of his work at www.teakezuidema.com.