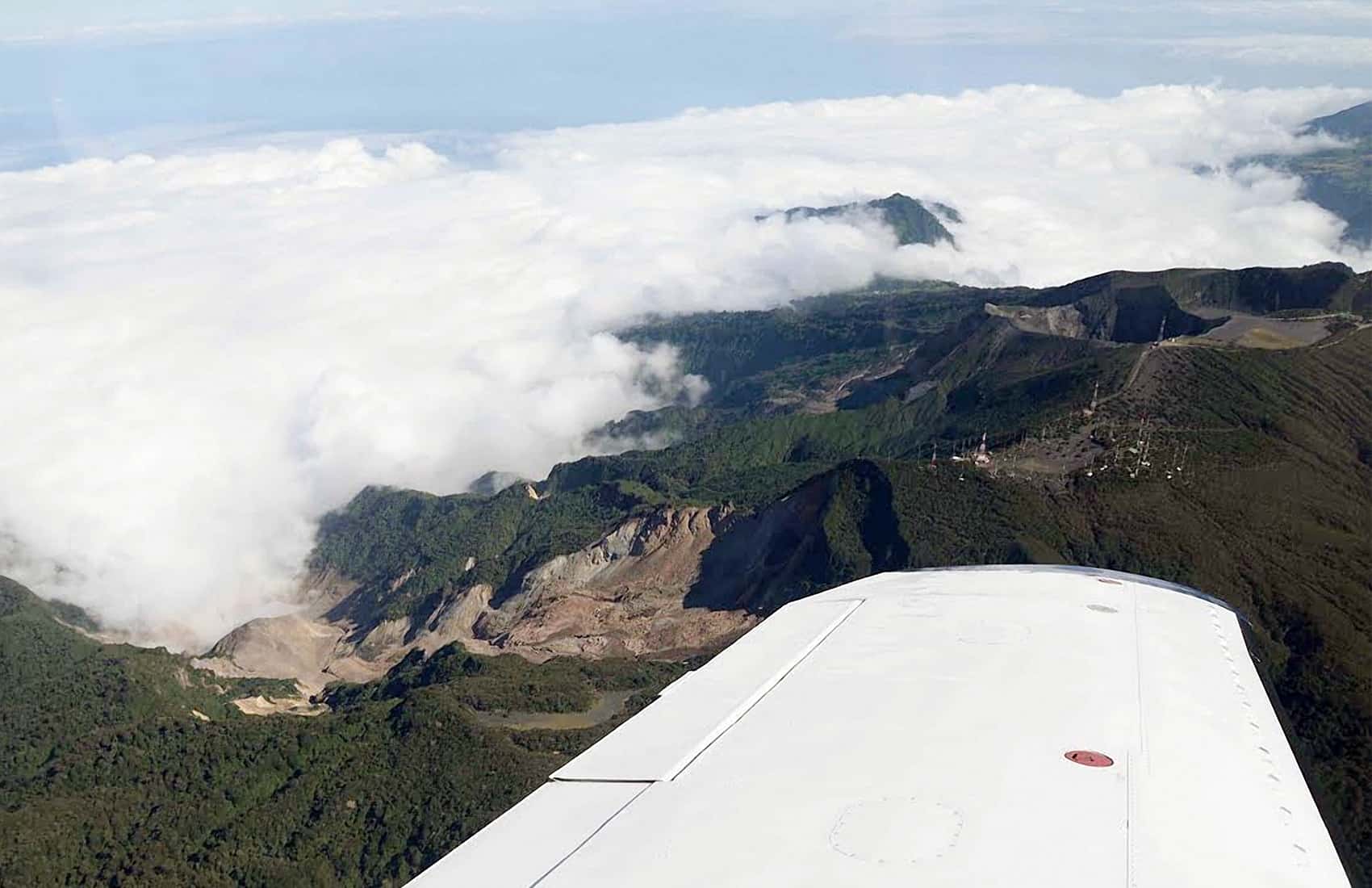 RSN experts are investigating if the collapse of terrain – visible at left of the airplane wing – near the Irazú Volcano's crater was caused by a seismic swarm, and if recent tremors could affect volcanic activity. Landslides also are threatening some of the 84 telecommunications towers located in the area. ((Via Federico Chavarría-Kopper/OVSICORI))

A series of minor tremors, or microseisms, occurring since December has residents of several communities near Costa Rica’s Irazú Volcano on alert.

The magnitude of the temblors ranged from 1.5-3.9 degrees, the National Seismological Network (RSN) reported, and peak activity occurred on Jan. 13, when the agency registered more than 50 microseisms in one day alone. But that activity has not led to a substantial change in volcanic activity at Irazú, RSN volcanic seismology expert Mauricio Mora Fernández said.

The RSN registered a peak in seismic activity at the volcano in recent weeks that has consisted mainly of low-magnitude temblors. But all have corresponded to the volcano’s normal cyclical activity, Mora said.

“Irazú periodically experiences seismic swarms, usually in short periods of time. Our current studies indicate that the current one has caused no impact or significant change in the eruptive activity of the volcano,” Mora told The Tico Times on Monday.

RSN experts are looking at whether there is a relation between microseisms at Irazú and the increase in activity at Turrialba Volcano in the past three years. Both volcanoes are located in Cartago, about 10 kilometers apart.

Residents’ concerns heightened last week when geologists from the National Emergency Commission (CNE) confirmed that a fissure has emerged over several hectares of earth near Irazú.

The 222-meter fissure near the crater has caused landslides in a 15-hectare area near 84 telecommunications towers used by the government and emergency agencies, as well as radio and TV stations.

CNE geologist Julio Madrigal said the fissure places the towers’ anchors at risk because of displacement of the earth. The crack is about 1.4 meters wide in some areas and up to 90 centimeters deep, the CNE reported.

Members of the National Radio and Television Chamber (CANARTEL) are discussing moving the towers if the landslides continue, the chamber’s president, Saray Amador, told members of the news media last week.

Telecommunications experts warn, however, that it is difficult to find a new location with characteristics similar to Irazú, which at over 3,400 meters (11,300 feet) provides the stations coverage of more than 60 percent of the national territory, CANARTEL said.

Mora believes that more research is needed to determine if the fissure is directly related to seismic activity in recent weeks or if it was caused by other factors such as rain or the slope of the terrain. RSN experts will inspect the Irazú area on Thursday and conduct additional measurements of the volcano’s activity.

Said Mora: “So far, our research does not indicate any significant change in the normal activity of Irazú, but we’ll continue our research.”