Presidential nominee Antonio Álvarez Desanti to step down as legislator 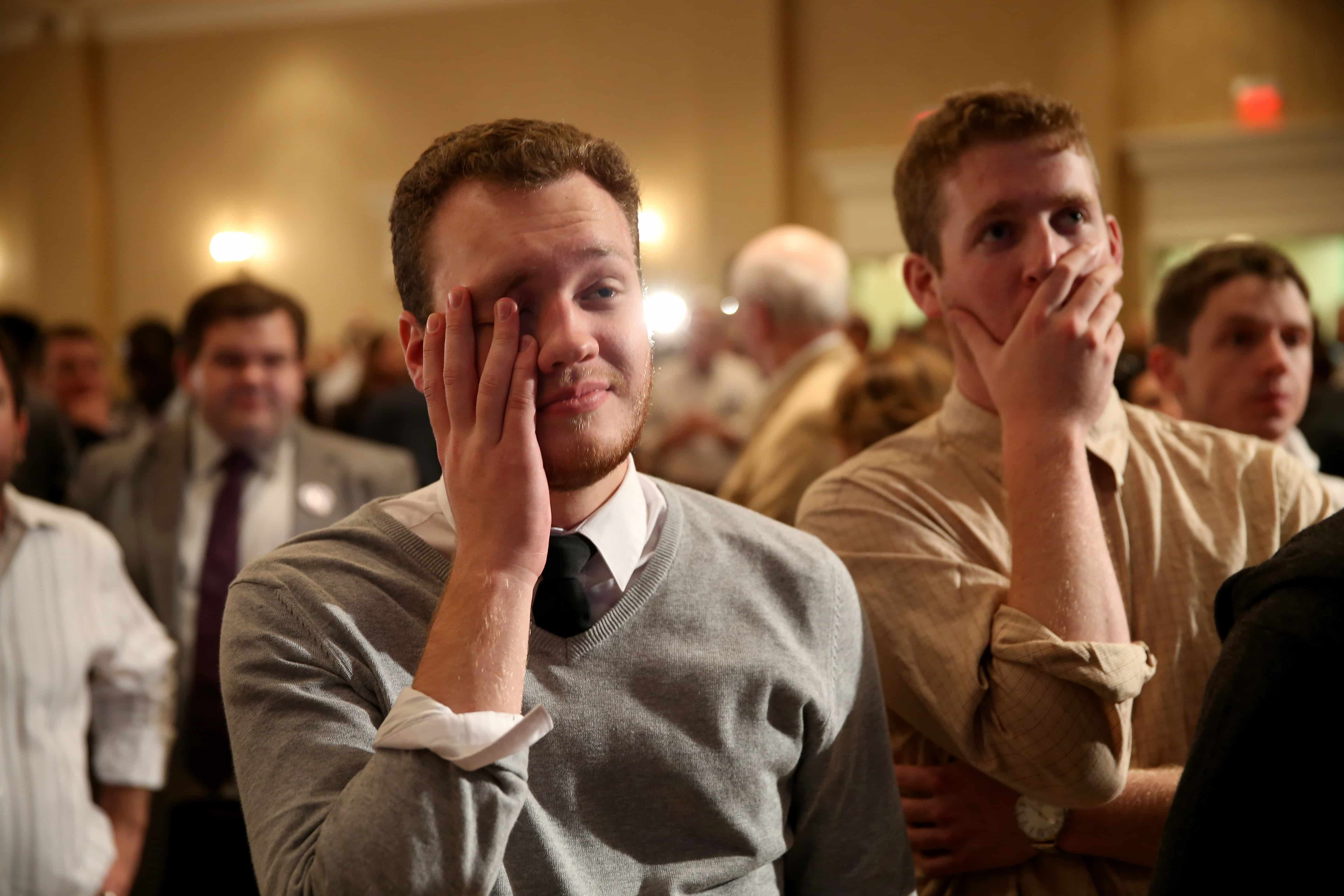 WASHINGTON, D.C. — Republicans won control of the U.S. Senate on Tuesday with a string of election victories from the Deep South to high plains, after a bitter and expensive midterm campaign in which anger over Washington gridlock was turned against a president who had promised to overcome it.

By late Tuesday, Republicans had won at least 10 of the day’s 13 closely contested Senate races, more than the margin they needed to control the Senate for the first time since 2007. GOP candidates held on to seats in Georgia, Kansas and Kentucky, and took seats held by Democrats in Iowa, Colorado, Arkansas, Montana, South Dakota, West Virginia and North Carolina.

Those victories came on a night dominated by Republicans nationwide. In the House, the GOP expanded on its existing majority. In governor’s races, Republicans Rick Scott of Florida and Scott Walker of Wisconsin won re-election.

In the Senate races, Democrats appeared to have kept just one of the states they had spent two years and millions of dollars trying to save — New Hampshire, where incumbent Jeanne Shaheen defeated Republican Scott Brown, the former Massachusetts senator who had moved across the state line to run again from his vacation home. And they seemed in danger of losing a seat nobody thought was at risk: In Virginia, Sen. Mark Warner, a Democrat, was in a razor-close race against Republican challenger Ed Gillespie,

The contest in Louisiana will not be decided until December, when Democratic Sen. Mary Landrieu will face Republican Rep. Bill Cassidy in a runoff election. And Alaska’s race could be delayed for days as votes flow in from far-flung villages. In Kentucky, Senate Minority Leader Mitch McConnell — who won his re-election race Tuesday — was already speaking like a majority leader.

When his party was out of power, McConnell won a hard-nosed reputation for using the Senate’s rules to block Democratic ideas. On Tuesday, McConnell said he would seek ways to work together with the president.

“I think we have a duty to do that. Just because we have a two-party system doesn’t mean we have to be in perpetual conflict,” McConnell told supporters in Louisville. “I think I’ve shown that to be true at critical times in the past. I hope the president gives me the chance to show it again.”

In other races, Republicans defeated two Democratic incumbents who once epitomized their party’s model for winning elections in red or purple states.

In Arkansas, Democratic Sen. Mark Pryor — a gun-friendly centrist focused on home-state priorities and the son of a state Democratic legend — was defeated by Republican Rep. Tom Cotton, a conservative Army veteran and a Harvard Law School graduate who cast the mild-mannered Pryor as a pushover for President Barack Obama.

In Colorado, Democratic Sen. Mark Udall had won his seat in 2008 stressing long ties to the state as director of Colorado Outward Bound. On Tuesday, he was beaten by Republican Rep. Cory Gardner, a folksy House member who stressed his even deeper ties to the state as a fifth-generation Coloradan. Tuesday was also a good night for Republicans in the House. The GOP expanded the majority it won in 2010, possibly gaining its largest House advantage since the 1940s.

The voting ended a long, bitter and expensive election in which the dominant issue was Obama. Just two years removed from a comfortable re-election, Obama has seen his image damaged by the bungled launch of his health-care program and by his reactions to crises overseas.

Republicans ran hard against him, while Democrats often ran from him. In Kentucky, McConnell’s opponent, Alison Lundergan Grimes, repeatedly and awkwardly refused to say even whether she had voted for Obama. U.S. President Barack Obama speaks in support of Connecticut Governor Dan Malloy on Nov. 2, 2014 in Bridgeport, Connecticut. On the weekend before Election Day the president was trying to energize the Democratic base to get out and vote. That didn't seem to work. Spencer Platt/Getty Images/AFP

On Election Day, Obama seemed to anticipate bad news. He called four radio shows to talk about the midterms, including a Connecticut program in support of Gov. Dan Malloy’s struggling re-election bid against Republican Tom Foley.

In that call, the president said his party had faced an uphill battle because it had to defend Senate seats in a series of conservative states.

“This election cycle is probably the worst possible group of states for Democrats since Dwight Eisenhower,” he said. The comparison was to the 1958 midterms, in which Eisenhower’s Republican Party lost 13 Senate seats.

But preliminary exit polls also suggested that Obama had become a symbol of what he once ran against: Washington’s gridlock, and the inability of its leaders to transcend partisan fighting.

Nearly 6 in 10 voters said they were “dissatisfied” or “angry” at the Obama administration, the polls showed. A similar proportion felt the same about GOP leaders in Congress.

“People see a Washington that isn’t working,” Republican National Committee Chairman Reince Priebus said Tuesday on MSNBC, “and the person at the head of it all is the president.”

That message trickled down to voters in faraway Alaska, where Phyllis Kruger, a 52-year-old real estate agent, campaigned Tuesday for Republican candidate Dan Sullivan. She blamed Washington’s problems on Democrats, including Sen. Harry Reid, D-Nev., who will lose his perch as majority leader. In the campaign’s last hours, Democrats were desperately trying to find votes in states across the country. In Colorado, two Democratic senators — Michael Bennet, who was not running, and Udall, who was — climbed on an actual stump to give stump speeches at Colorado State University.

Udall walked across the campus plaza, shaking hands and asking people if they voted. They walked into a student center and went up to two young women who had a ballot on their table.

“I’m Mark Udall,” he said to the women. One, engrossed in studying, literally jumped with surprise.

Bennet introduced himself and looked at her empty ballot.

In Montana, Republican Rep. Steve Daines won the seat occupied by Democratic Sen. John Walsh. The race became a cakewalk after Walsh dropped out of the race following reports that he plagiarized parts of a research paper needed for his master’s degree.

In South Dakota, former Gov. Mike Rounds, a Republican, won the race to replace the retiring Sen. Tim Johnson, a Democrat. Rounds had faced two serious opponents — Democrat Rick Weiland and Larry Pressler, a Republican former congressman and senator running as an independent. But both faded in the last weeks of the race. McConnell will almost certainly be chosen as the Senate’s majority leader, giving new power to a Washington veteran who has frustrated Democrats by maximizing the power of the Senate minority — inducing Republicans to vote as a bloc and using the filibuster mechanisms that make the Senate grind, sputter and stop.

McConnell now faces a new challenge: how to make the Senate, and his majority, work.

As leader, McConnell will have to build coalitions out of a Republican caucus divided between moderates and fire-breathing conservatives such as Sen. Ted Cruz, R-Texas, who has urged a confrontational approach with the White House. McConnell will also have to work with or around Senate Democrats, who will undoubtedly use McConnell’s own blocking tactics against him.

Beyond the House and Senate elections, there were races for governor in 36 states. In Pennsylvania, Democrat Tom Wolf easily beat the incumbent, Republican Gov. Tom Corbett. And in Florida, Republican Rick Scott held on to his seat, defeating Charlie Crist, a former Republican governor who had reinvented himself as a Democrat.

In Wisconsin, Republican Gov. Scott Walker also won re-election by a comfortable margin after a race that had threatened his prospects as a 2016 presidential contender.

In two other reliably Democratic states — Maryland and Massachusetts — Democratic candidates were in danger of losing races for governor. That was more bad news, on a night when the Democrats had an ample supply of it already.