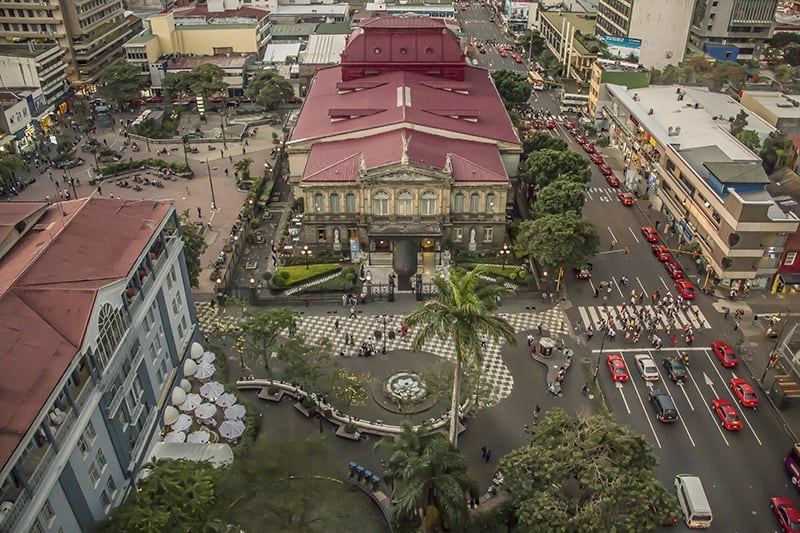 Imagine a birthday cake large enough to feed 5,000 people. Now imagine that this cake is shaped like the National Theater in downtown San José. The colossal dessert has pillars, statues, and sloped roofs, all sculpted in the same Romanesque design.

That is exactly what you’ll find on Sunday, Oct. 26, when the National Theater celebrates its 117th birthday. There will also be a parade down Second Avenue, live performances in the Plaza de la Cultura, four hours of poetry readings for children, and a slew of workshops and tours.

You may wonder why 117 years warrant such festivities. It’s not a centennial; it’s not even a round number. But for Inés Revuelta Sánchez, the theater’s new managing director, this anniversary is a special one: Revuelta wants to reintroduce the National Theater to Costa Rica.

“I think the theater has been closed to too much of the population,” said Revuelta the other week during a conversation with The Tico Times. “It may be because of the opulence; people don’t want to come in here. But modern life is so chaotic and hectic. The only way you can really maintain control is to interact with art and culture.”

Revuelta should know: Born in Cuba, Revuelta was three years old when her family left the country and resettled in Costa Rica. They lived in a small apartment in downtown San José, in a building that used to stand directly behind the National Theater. Revuelta’s fathers shined shoes in the Plaza de la Cultura. For her, these landmarks at the heart of San José are not just a cultural touchstone. They are where she grew up.

Revuelta spent many years as a dancer and eventually became general director of the Melico Salazar Theater, the National Theater’s closest sibling, located a few blocks down the street. While Revuelta takes pride in her work at the Melico Salazar, she was satisfied to walk away at the end of her three-year term. When Culture Minister Elizabeth Fonseca asked Revuelta to helm the National Theater earlier this year, she was grateful for the opportunity to lead the facility’s 102-person staff.

But as far as massive celebrations go, the 117th anniversary is as spontaneous as they come. Revuelta says that historically, the theater’s birthdays have been exclusive affairs, expensive dinners that took place inside the building. Not even four months ago, Revuelta was inspired to make the Oct. 26th event large, public, and almost entirely free – and to seek sponsors and donations from area organizations. Support comes from such diverse names as the newspaper La Nación, the University of Costa Rica, and the Café 1820 coffee company, among numerous others.

“Everyone has the right to know that this is a theater that everybody owns,” said Revuelta. “[The anniversary] may not be the largest thing, but it will be the most popular thing we’ve ever done.”

If all goes well, downtown San José will fill with merrymakers, thanks to a five-block parade that will commence at the Bank of Costa Rica and end at the Plaza de la Cultura. The parade will consist of high school musicians from the Liceo de Costa Rica and local firefighters. The Band of Costa Rica will perform big-band standards outdoors – weather permitting – and hordes of other artists will perform throughout the day. Revuelta also plans to inaugurate two new National Theater tours for blind and deaf visitors.

To give visitors a sense of the building’s history, she has even commissioned an exhibit of past directors of the National Theater. Revuelta wanted to include photographs and biographies of directors who are now deceased; the exhibit lines the theater’s principle corridor, flanking the main entrance.

“The other night I was in the theater alone,” recalled Revuelta. “And I looked at the faces of those directors – and I started crying, because I felt a connection. Wherever they are, I hope that they are happy with what we are doing.”

7 p.m.: Grand Gala in the National Theater auditorium. (While all other events are free, the gala is ticketed. Call for info and reservations at 2010-1151.)