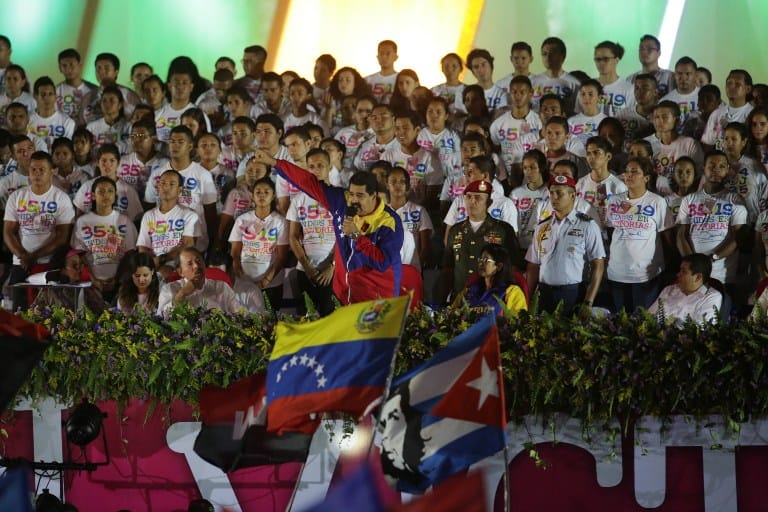 Venezuelan President Nicolas Maduro delivers a speech during the celebration of the 35th anniversary of the Sandinista Revolution, at La Fé square in Managua on Saturday. The revolution overthrew Anastasio Somoza (in office from 1965 to 1972 and from 1974 to 1979), the last member of the Somoza family to be president, ending a dynasty that had been in power since 1936. (AFP)

Thousands of supporters gathered at the Plaza La Fé, north of Managua, to celebrate the Sandinista rebel victory in 1979 over the dictatorship of Anastasio Somoza, whose family had run Nicaragua like their own estate since 1936.

The most prominent guest was Venezuelan President Nicolas Maduro, whose oil-rich nation provides millions of dollars in aid to impoverished Nicaragua.

Maduro said the Sandinista revolution “scored a great triumph over the strategy of imperial domination in the continent” and paved the way for other revolutionary movements.

In early July, Ortega endorsed a route chosen by a Chinese firm commissioned to dig a $40 billion canal linking the Caribbean and the Pacific.

The canal is expected to create thousands of jobs, a vital boost for this country of six million — the second poorest in the Americas after Haiti — where half of the population lives in poverty.