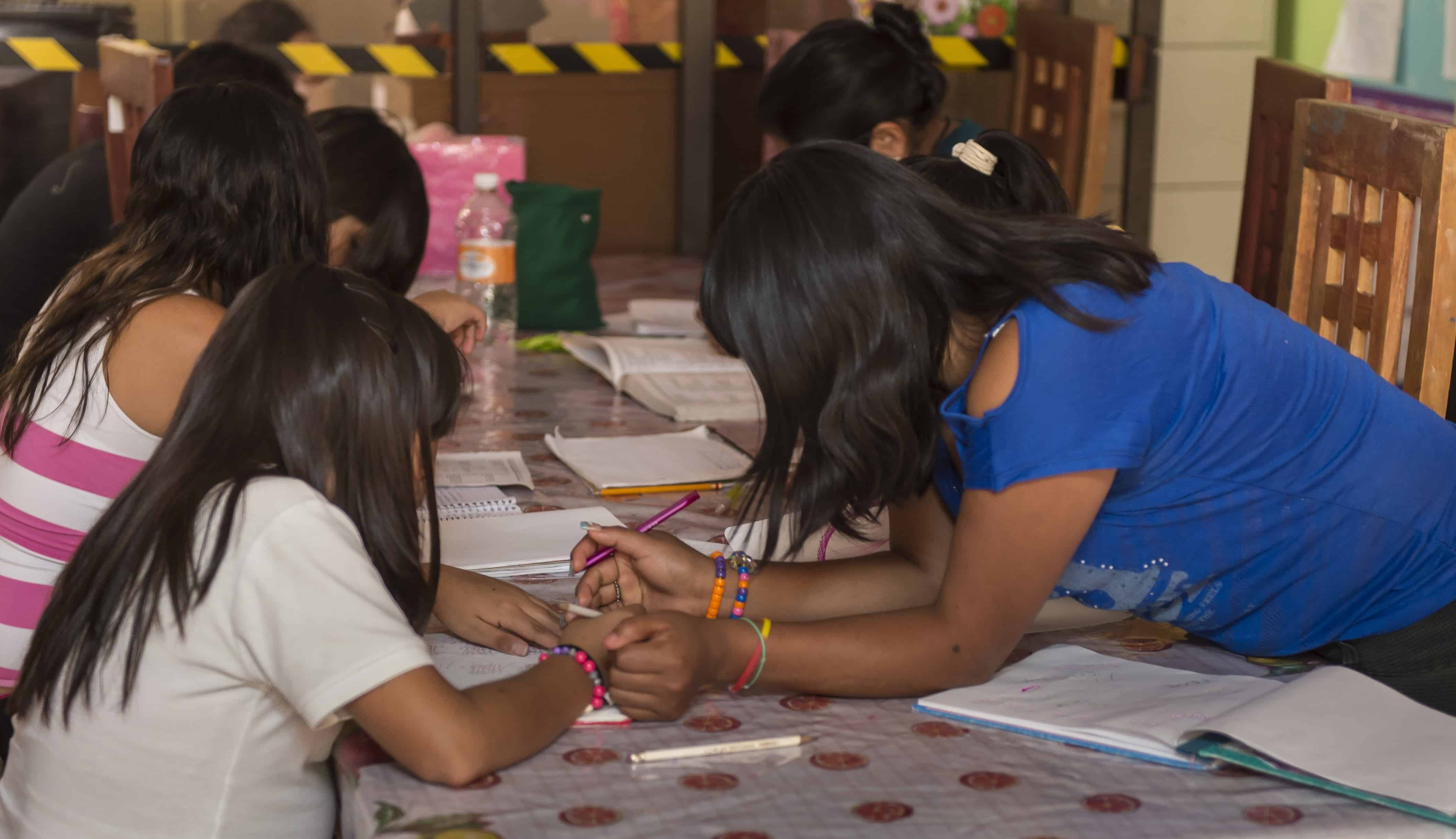 Minors study at Casa Alianza, a shelter for Mexican and foreign minors deported from the United States, on June 12, 2014 in Mexico City. According to the U.S. Border Patrol, between Oct. 1, 2013 and May 31, 2014, 47,017 minors who entered the country illegally without the company of an adult were identified, almost doubling the number registered in 2013. (Omar Torres/AFP)

WASHINGTON, D.C. – The Obama administration toughened its border policies Friday, hoping to stem a surge of women and children into the United States by sending a stronger message that unauthorized migrants will be turned away.

The steps, aimed at those entering from Mexico, include adding more immigration judges to process a backlog of asylum claims and to more quickly deport adults whose cases are rejected. New detention facilities are also being opened for families awaiting hearings and ankle monitoring bracelets will be used to keep tabs on them, officials said.

The moves mark a recognition by the administration that the unexpected influx of tens of thousands of immigrant children has become a serious humanitarian and political crisis. So far this year, 52,000 unaccompanied minors and 39,000 adults with children have been apprehended along the Mexican border — a much higher proportion than normal.

The surge has become an unexpected flashpoint in Washington’s immigration debate, making it even less likely that House Republicans will support comprehensive reform legislation this year.

Administration officials had previously said that the main cause of the influx was an escalation of gang violence and poverty in Guatemala, El Salvador and Honduras. But the new measures Friday represented an acknowledgment that there is a widespread perception in Central America that women and children who enter the United States illegally would be permitted to stay.

U.S. Vice President Joe Biden discussed the crisis during a stop in Guatemala on Friday. President Barack Obama also phoned Mexican President Enrique Peña Nieto on Thursday to emphasize that migrants will not be eligible for legal status or citizenship.

Amid reports of children crammed into border patrol stations, Republicans have faulted the administration’s border policies for being weak and contributing to rumors of sanctuary in the United States. The situation presents a serious challenge for Obama as he considers whether to use executive power to expand the number of undocumented immigrants who can stay in the country without penalty.

“This is being put forward in a very deliberate way,” Muñoz said during a conference call with reporters. “The vice president’s efforts and the administration’s effort is to make sure people have accurate information and to push back on misinformation that is being spread and is contributing to the problem.”

In addition to tougher enforcement efforts, the administration announced Friday that it would invest $9.6 million to help Guatemala, El Salvador and Honduras repatriate those sent home from the United States, along with new aid to help improve security in those countries.

While the administration took steps to expedite the removal of adults who cross the border illegally, officials said they are unable to follow similar procedures for the larger pool of children who are showing up at the border without their parents. Federal law requires the children to be handed over to the Department of Health and Human Services within 72 hours and released to family members or other guardians with orders to appear at an immigration hearing later.

But immigration experts said many youth do not show up for their hearings, intent on remaining in the country illegally. Administration officials declined to release figures on how many young migrants have appeared before immigration judges.

In a meeting with Guatemala President Otto Pérez Molina, Biden emphasized the dangers of children being placed in the hands of smuggling networks and said that the United States “recognizes that a key part of the solution to this problem is to address the root causes of this immigration in the first place. Especially poverty, insecurity and the lack of the rule of law, so the people can stay and thrive in their own communities, so a parent doesn’t feel so desperate.”

The crisis has placed Obama — who has called immigration reform his top second term priority — in a difficult bind.

Since taking office, he has tried to project a tough image on deportations in an attempt to convince Republicans to support comprehensive reform legislation that includes a path to citizenship for millions of undocumented immigrants.

That approach has led to mounting criticism from Democrats and immigration advocates, who note that more than 2 million undocumented immigrants have been deported during his tenure. His decision in 2012 to defer the deportations of young immigrants brought to the country by their parents before 2007 won raves from advocates, but has been criticized by Republicans for helping contribute to the perception abroad that U.S. policies are weak.

Obama is weighing potential administrative action to further slow deportations if Congress fails to reach a legislative deal by the end of the summer. But the crisis in Texas further complicates that decision.

GOP lawmakers quickly denounced the administration’s announcement on Friday, saying the measures still were not strong enough to deter the sudden spike in migrants from Central America.

Democrats and liberal groups, meanwhile, denounced the new measures as inhumane. A spokesman for Rep. Luis Gutierrez, D-Ill., said he does not support placing women and children in detention facilities as they await appearances before immigration judges.

Joanne Lin, legislative counsel for the American Civil Liberties Union, said that many families “have fled crime and violence in Central America, and have suffered trauma during their treacherous journeys to the U.S. in search of legal protection. Human rights require that detention be the last resort, not the first.”