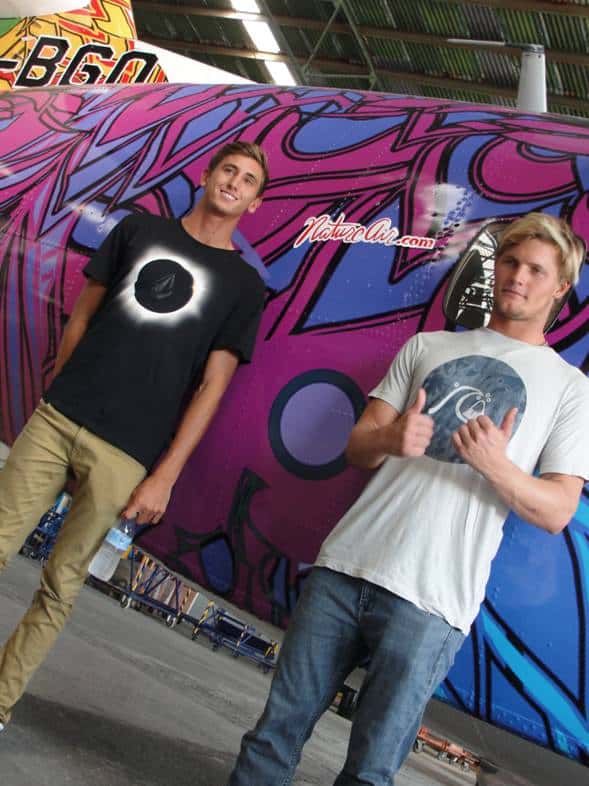 Surfers León Glatzer and Noe Mar McGonagle will be able to avoid Costa Rica's notoriously bad roads and congested traffic with Nature Air flights as they travel to some of the world's best surfing destinations. ((Courtesy of Nature Air))

As two of Costa Rica’s most talented surfers traverse the country and the world in search of big waves, national airline company Nature Air is making sure they always get there in time. Pavones’ own Noe Mar McGonagle and León Glatzer made an official agreement Monday with the Costa Rican airline, which will fly the surfers anywhere in the country whenever they want.

The surfers are normally out of the country as they compete on world surfing tours. But when they’re back home, they’re always trying to get out to the spots with the best waves, said McGonagle, who finished this year ranked 41st in the World Surf League’s Qualifying Series.

“This ability to move comfortably and in record time to the surf spots I look for is something I’ve wanted for a long time,” McGonagle said. “In a car it takes nine hours to get from San José to my house in Pavones. Now I can make it in 55 minutes.”

McGonagle also runs surf camps for young Costa Ricans interested in the sport and said these free flights will allow him to give back more time to his community. And when he represents Costa Rica in the international events, McGonagle said he’ll now have more time to train and not have to spend a whole day taking a car up to San José to fly out of the country for his contests.

“My time here in Costa Rica is limited,” he said. “I got back last week and I leave the 28th of December for Portugal to compete in the World Junior’s Championships. This ability to enjoy my time surfing where I like guarantees that I’m in good condition to represent my country in the best way.

Glatzer echoed McGonagle’s attitude, saying the domestic flights throughout Costa Rica will let him get to his international destinations even faster and allow him to focus more on his sport.

“I’m really happy because in 2015 I flew all through Europe and now that I will be able to get there faster, this means more time for surfing and training for a bigger role in international surfing,” Glatzer said.

“We’ve flown more than half a million of the most demanding tourists in the world to the most beautiful destinations in Costa Rica,” said Nature Air President Gustavo Chinchilla. “Now it’s turn for Costa Ricans, and we want for them to enjoy more of their time at their destinations by avoiding traffic and bad roads.”