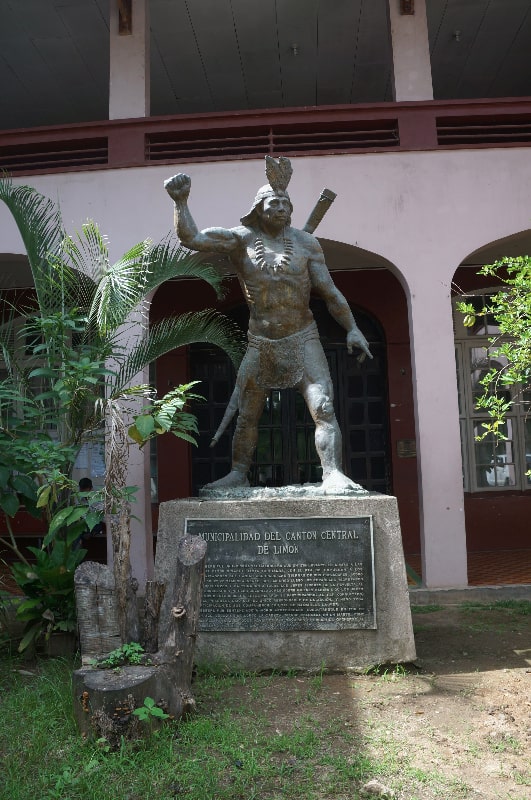 The road winds past the deep green of well-kept fincas and dense banana plantations, but as the first hint of a sea breeze fills the air it straightens out, and the lush scenery is replaced by a metallic valley of 40-foot shipping containers. This is the Terminal de Contenedores. The multiple rows of containers on the outskirts of Puerto Limón illustrate why this compact port city is the second most populous in Costa Rica – 90 percent of the country’s exports depart from here.

The gateway to Costa Rica’s Caribbean Coast, Puerto Limón is steeped in history. Christopher Columbus commanded the first European crew to set foot here, on his fourth and final voyage to the New World in 1502. The crew was greeted by Carib Indians wearing gold bands in their noses and ears.  Many historians believe it was this decadent jewelry that inspired the name Costa Rica, rich coast. Like much of the rest of the country, Puerto Limón and the Atlantic Coast remained largely unexplored by the Spanish during the colonial period. The surrounding bays were frequented by pirates, who took advantage of the scarce maritime traffic to hide out.

Limón remained largely uninhabited until the town was formally founded in 1854. It experienced a further boom in 1867 when construction began on the railroad that would connect the port to the Central Valley, enabling Costa Rica to export coffee and bananas from its Caribbean coast.

A big influx of Chinese and Jamaican workers helped to build this railroad. Today Limón is the most multiracial province in Costa Rica, thanks in part to a law, repealed in 1948, that denied citizenship or free movement to these new arrivals.

While the town’s center is small and not a major tourist attraction, a stop in Limón is certainly worthwhile while en route to more popular Caribbean destinations such as Tortuguero National Park or Puerto Viejo. Here’s a look at what you’ll see on a walking tour of historic Limón.

The oldest building in town houses the offices of the Black Star Line steamboat company, founded by the Jamaican activist Marcus Garvey. It was built in 1922 and is the town’s finest example of Victorian Caribbean architecture. Garvey also founded the Universal Negro Improvement Association, aimed at improving socioeconomic conditions for Africans in the Americas. Within these walls, Garvey worked to organize a return back to Africa, though none of his ships ever made it.

Today the first floor of the building is home to small shops that sell souvenirs. Liberty Hall, a large open space used during cultural events and festivals, is on the second floor. Limón’s central park was commissioned by the United Fruit Company and opened in 1905. The park has been ignored in recent years, and the jungle has overgrown many of its benches and the octagonal gazebo that is the park’s centerpiece.

However, the park’s many statues give a visual history of the town. From a representation of an indigenous couple to a monument that pays homage to the many cultures that came together to build the railroad, there are treasures to be explored here. And don’t leave the park without looking up, because sloths live in the trees. At the edge of Parque Vargas is a lookout point that offers views of a small island offshore. Isla Uvita, or Little Grape Island, is where Columbus anchored his ship in 1502. The island remains uninhabited, but is a popular destination for local surfers thanks to the reef break.

The Municipalidad del Cantón Central de Limón, or Town Hall, resides in a brick neoclassical building that dates back to 1942. The entrance is marked by a statue of Pablo Presbere, a Talamancan who fought to defend indigenous communities in the 1700s. He is considered a national hero. Though much smaller than the Central Market in San José, the Mercado Municipal in Limón is home to a similar selection of local produce and goods.

More impressive than the actual products sold here is the building’s art deco architecture. The closed-air market was created in 1893 and remodeled in the 1930s and again in 1941.

From 1899 until the 1930s, the United Fruit Company held a virtual monopoly on banana exports from Costa Rica and other tropical nations. The company’s administrative offices in downtown Limón were built in the 1800s. The buildings have a unique L-shaped floor plan and adaptive features for the tropical environment.

In the 1930s, after a fungus called Panama disease devastated the banana industry, the building was sold. However, United Fruit continued to do business until it was bought out in 1970 and became the United Brands Company, and later Chiquita Brands International.

Limón is not the place to go in search of fast ziplines, lush jungles and stunning beaches, and it doesn’t pretend to be. But it’s a fascinating window into little-known aspects of Costa Rica’s history, culture and human imprint.