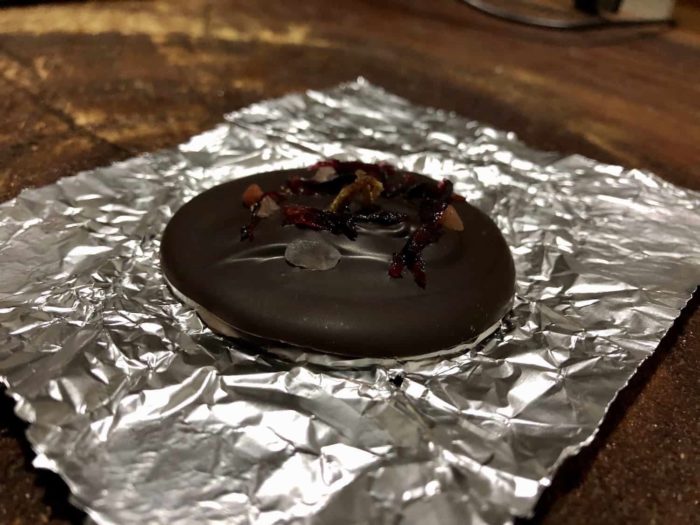 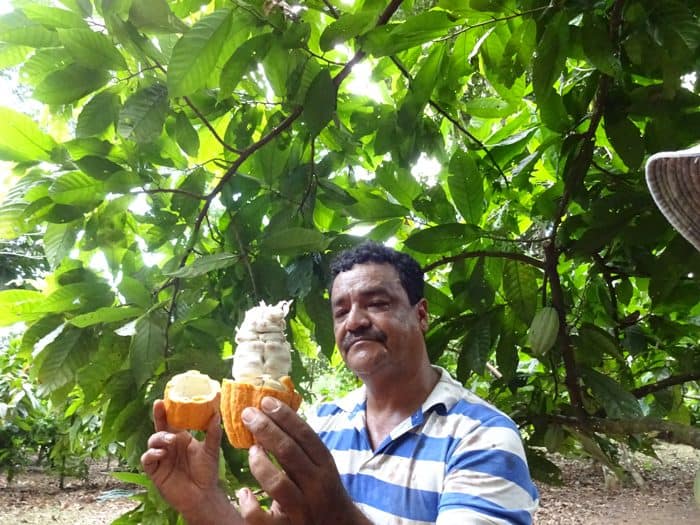 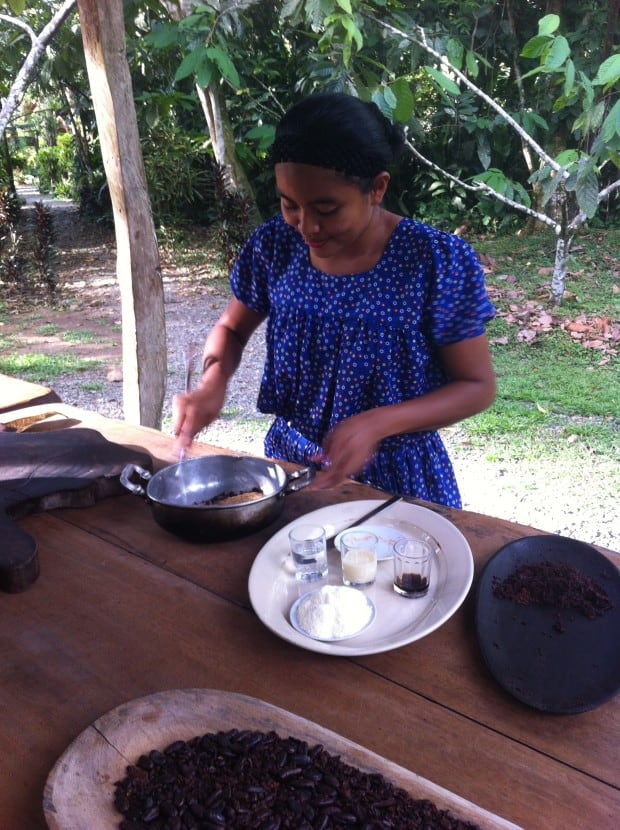 Eunice, an indigenous Teribe, whips up some chocolate during a tour of the Museo de Cacao in Cahuita, Costa Rica. (Karl Kahler/The Tico Times)

CAHUITA, Limón — Next time you’re on the south Caribbean coast with some time to kill, treat yourself to a chocolatey walking tour of the Museo de Cacao. The payoff is pretty sweet.

Stretching the definition of “museum,” this offbeat roadside attraction near Puerto Viejo is a trail through the woods leading to a series of exhibits that recreate the history of chocolate production on Costa Rica’s east coast, from the indigenous people who mixed cocoa with maize, pepper and hot chiles to the Europeans who perfected it with milk and sugar to the Jamaicans who harvested and processed cocoa by hand here after a fungus plague destroyed the banana industry.

Our tour guide, Rafael Obando, 34, shows us a mature cacao pod and says they’re often opened with machetes, but he’ll show us how the monkeys do it — and he pounds it on a board three times until it cracks open. Inside are white, gooey segments that we break off and taste, kind of sweet, but the cocoa seed inside is bitter.

The seeds are left to ferment for six days, Rafael says, until the gooey white pulp sloughs off, leaving the crucial bean. These are left to dry in the sun for a couple of weeks or so, until they turn toasty brown. We all have a taste of one of these beans — it tastes like chocolate missing the sugar, which is exactly what it is.

We enter the one structure reminiscent of a museum, a building containing historic relics of the large machinery once used here to process cocoa.

There’s a strange red shack called the Caribbean House, with a blue bicycle on the porch and life-size figures depicting a black man, woman and child, to show what the homes of these cocoa workers looked like decades ago.

An exhibit in the next building shows a grinning Chinaman, Don Manuel León, a chocolate mogul of the 1940s and ’50s, sitting at the counter of his Puerto Viejo commissary.

No fool, he would pay his workers in both cash and cacao right next to his bar, where they would get busy spending their paychecks. The bar, with antique guaro jars, is depicted right next to the grinning chocolatier with the nice wristwatch.

Finally we come to the main event. A woman in a blue dress is standing behind a table littered with roasted cocoa beans, and there is a tray containing little saucers and jars of brown sugar, powdered milk, condensed milk, vanilla extract and water.

Asked her name, the woman in the blue dress says she doesn’t have an indigenous name, but she is an indigenous Teribe — “y no es Terrible, es Teribe,” she jokes (it’s not “Terrible,” it’s “Teribe”). Her name is Eunice.

Eunice roasts chocolate beans over a wood fire, then expertly cracks them open. Rafael shows us how to grind them up with a hand-cranked appliance resembling a meat grinder.

Eunice goes to work with this chocolatey paste. She puts the cocoa in a bowl, adds all the other ingredients and mixes vigorously with a wooden spoon.

She asks the two teenage girls if they would like to wash their hands and help her knead the chocolate. The girls wash their hands, and Eunice demonstrates how to take a big handful and squeeze and resqueeze it and roll it in your hands until it’s in the shape of a ball.

Eunice puts her chocolate ball on a plate and mashes it flat, creating a fudge pancake. She invites the girls to put their own chocolate balls in the middle of her pancake and mash them into it — creating a superpancake.

Eunice shapes it into a perfect circle, makes sure it’s flat and pretty, and then slices it into bite-sized pieces shaped like kites. And then she invites us to sample.

It’s the most succulent confection I’ve ever put in my mouth — better than my grandmother’s fudge — soft, chewy, freshly roasted chocolate, perfectly sweetened and flavored. I eat an embarrassing amount, and I’m supposedly the guy who doesn’t like sweets.

This being Costa Rica, our guide caps off the tour by showing us three sloths in five minutes, plus a tree full of howler monkeys.

The man who met us in the parking lot and walked us to the reception area showed us a crocodile lurking in the big pond under the monkey tree. He says the monkeys sometimes fall out of the tree and the crocodile eats them. He says monkeys can swim, but they can’t swim faster than a crocodile.

On our way back to our cars we look for the crocodile, but he seems to have given up the vigil. It’s not every day monkeys fall out of trees.

Directions: The Museo de Cacao is located about halfway between Cahuita and Puerto Viejo on the coastal highway, just north of the turnoff to Bribrí. It’s on the east side of the road, marked by a large sign.
Hours: 8 a.m. to 4 p.m. daily
Cost: $25 for 2-hour tour, $15 for 1-hour tour; canoe tours and nighttime turtle tours also offered.