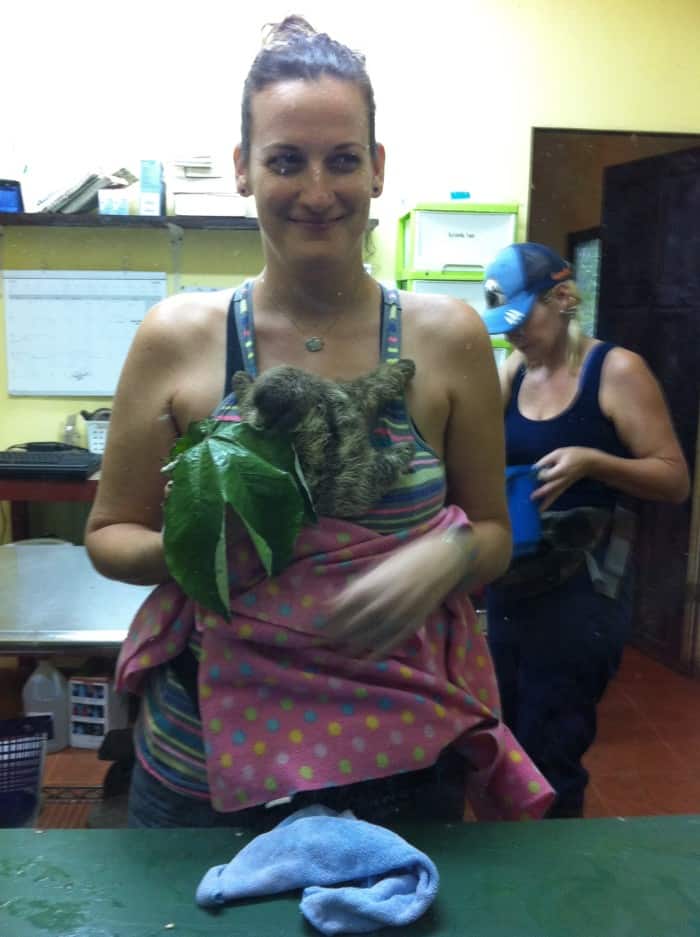 QUEPOS, Puntarenas — The three of us gasped in surprise when we saw the tiny three-toed baby sloth clinging to the chest of a human “Sloth Mama” named Sam.

“His name is Chuck, and he was actually found in a tree without his mama,” said Vernita Gundy, 42, from Philadelphia, our tour guide at the Kids Saving the Rainforest animal rescue center near Manuel Antonio, where orphaned sloths are sadly abundant.

“We don’t know what happened to his mom,” Gundy said. “He was in the tree crying, and they had to go up there and somehow get him down.”

Crying? What is the sound of a baby sloth crying? It was the kind of story that made full-grown humans want to cry.

Yet Chuck was thriving — chewing on a big guarumo leaf, even as the three surprisingly large claws on his front paws clutched the bib of Sam Trull, 34, a U.S. primatologist who came to Costa Rica and accidentally fell in love with baby sloths.

“There are five babies in the nursery, and then two sub-adults that are going to be released this summer that are outside,” Sam said, speaking into a microphone through a window that keeps the baby sloths safe from contagion and anxiety caused by anything outside (like us).

“Chuck is 5 to 6 weeks old,” said Sam, holding her baby while a colleague behind her busily prepared food for all the other animals here.

There’s a howler monkey in the clinic, and in the cages next door there are big strong spider monkeys, cute white-faced capuchins, endangered squirrel monkeys — lots of them — and even two non-native monkeys, including some marmosets that strongly resemble the cast of the 1984 movie “Gremlins.”

There are injured parrots, crippled hawks and a blind coatimundi. There are kinkajous and turtles. Ocelots and other felines could be an option for the future, but new cages would have to be built.

“That’s a guarumo leaf he’s eating,” Sam said, glancing down at her surrogate sloth-child. “It’s one of their favorite foods, especially the three-toed sloth.”

The guarumo is not a dense tree, so it’s easier to spot a sloth feeding in one, she said. But after a good meal, the sloths move to trees with denser foliage, the better to protect them from aerial predators like harpy eagles.

The sloths’ coarse fur makes a good host for green algae, the better to camouflage this docile pacifist in the treetops. Sloths would rather hide than fight — but if you want to fight one, you might want to make an appointment with the hospital first.

“When we have electrocuted sloths and we have to treat them, it’s not easy,” Gundy said. “It takes three people to get them in and out of a cage.”

Do they have sharp teeth?

You don’t want to find out with your fingers. Sam was once badly bitten trying to feed a carrot to a two-toed sloth that had been electrocuted on a power line.

“The two-toed can be very dangerous,” she said. “They have really strong jaws, like they can chew through rocks, and they have really big canine-like teeth, not technically canines, but they’re giant, canine-looking teeth, and they can do serious damage.”

Sam said this, bear in mind, with an infant three-toed sloth cuddling her chest, munching on a leaf.

“And they actually fight, they’re territorial, like the males,” she said. “And they’re also omnivorous.”

The three-toed sloths, on the other hand, have nubby molars that couldn’t do much damage.

“These guys will bite if threatened, but usually they try camouflage,” she said. “It’s kind of sad when they try to bite.” She said it’s the kind of bite that will make you say, “Oh, that’s cute.”

But sloths’ mouths are full of bacteria that can be really dangerous.

“Almost everyone who is bitten by a sloth here has to take antibiotics because otherwise the bite can get infected really fast,” Sam said.

And there was one thing Chuck wasn’t doing anymore.