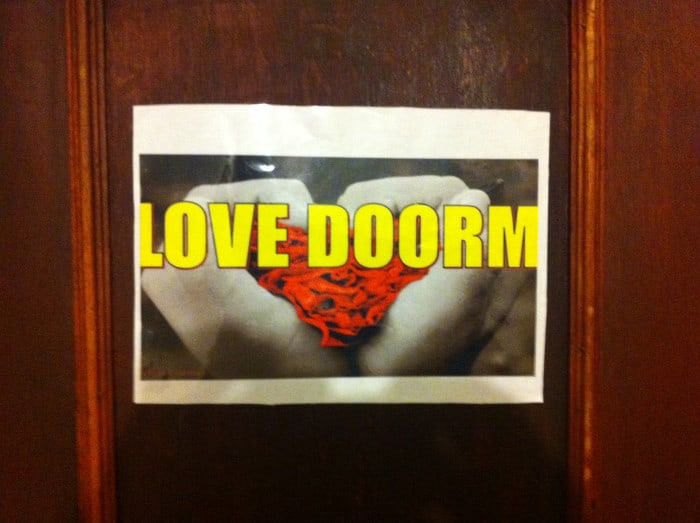 What it lacks in spelling, the Costa Rica Love Hostel makes up in style. (Karl Kahler/The Tico Times)

Rule of thumb of budget travel: If you spend half the money, you can travel twice as far for twice as long. Even millionaires know this trick – for $500, you can spend five nights at a hotel that costs $100 a night, or for $50 a night, you can spend 10 nights.

So when you get into the $6-a-night range, you’re talking 83 nights!

Enter Costa Rica Love Hostel, the budget traveler’s dream deal. Located in Santo Domingo de Heredia, reachable by bus from downtown San José in 20 minutes for pocket change, this low-dollar lodging with the funny name is a bargain in more ways than one.

And in case you’re wondering, it’s just a name – the hostel does not offer free love (or, to answer a question one inquisitive European woman asked, gigolos).

The shared co-ed dorm containing four bunk beds (with a sign on the door that says “Love Doorm”) costs just $6, and prices for private rooms, some with private bathrooms, run a bit higher. A pancake breakfast and all-day coffee are included, plus cable TV, movies, computers, Wi-Fi and the helpful attentions of proprietors Manfred Cordero and his significant otra, Meylinge.

Best of all are the eminently affordable day trips you can take from this spot in Manfred’s Hyundai adventure-mobile, which seats a half-dozen people comfortably, or up to 11 in a pinch.

We took the Arenal tour ($39 each for four people) — a 12-hour trip that ended up stretching to 16 hours. Departing at 6 a.m., we drove to the famous Arenal Volcano via the little-known Los Angeles Cloud Forest, stopping along the way to stalk hummingbirds.

After a $5 breakfast at a roadside soda, we hung around to watch dozens of oropendolas, the fabulous birds so named because their tails resemble golden pendulums. Just across the road, Manfred caught a red poison-dart frog in his baseball cap, and we all photographed this beautiful but toxic little fellow up close (but not too close).

We stopped at the impressive suspended bridge over the Río Peñas Blancas, where we spotted a three-toed sloth lazing in the trees. We stopped again when we saw a giant, golden male iguana lounging in a tree with a brown female and a baby. And we stopped once more when we saw two sloths in a tree they were sharing with a rainbow-billed toucan.

At Río La Fortuna, we had a spectacular swimming hole all to ourselves, with a waterfall, cliff dive and rope swing. The jump from the top of the waterfall is easy — but beware the current that sweeps you toward the rocks, then pulls you under and is reluctant to let go.

“People have died here,” Manfred says. “Drunk people come when it’s raining hard and the current is strong, and there’s a little cave down there.” He points below the waterline of the rocks in the path of the current. “The current can push you in there and hold you there, and you can drown.”

Now he tells us.

We’ve saved the best for last. After driving past the cloud-shrouded Arenal Volcano and the dammed lake of the same name, we park outside the five-star Tabacón resort and take a short walk to the same attraction that some people are paying big bucks for: the termales, hot springs heated by the magma churning under the big cone up the hill. Only this spring is much bigger, and this one is free.

Getting there: The Costa Rica Love Hostel is located 100 meters east of the Polideportivo sports complex, in a house with a black gate, in Santo Domingo de Heredia. You can get there by bus or taxi from San José.
Phone: (506) 2244-1678
Email: costaricalovehostel@gmail.com
Tours: Arenal (4 people $39 each); Punta Leona Beach, Mantas Beach, Herradura Beach, Jacó Beach, Playa Hermosa (4 people, $32 each); Poás Volcano, La Paz waterfall (4 people, $29 each); Manuel Antonio National Park (4 people, $42 each); 2-day tour of the Caribbean at Cahuita and Puerto Viejo (4 people, $70 each plus food and lodging); 2-day tour of Guanacaste, Tamarindo, Conchal, Flamingo, Baulas National Park (4 people, $75 each, plus food and lodging).