Arenal Hanging Bridges is a high-altitude stroll through the canopy 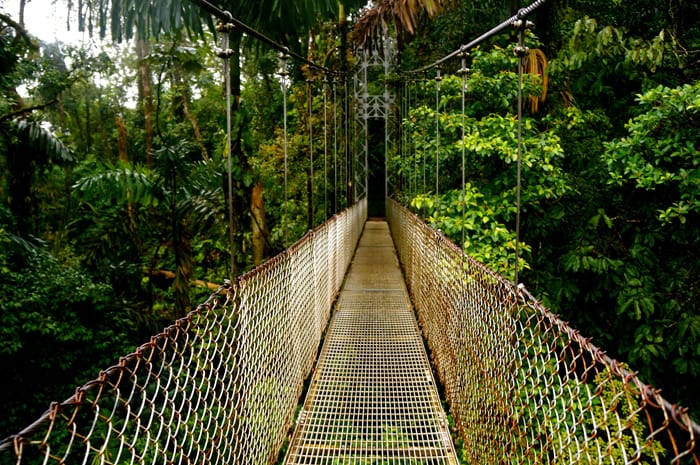 Yes, the bridge is safe. Now enjoy a panoramic view of the canopy of this pristine rain forest. (Lauren Salisbury/The Tico Times)

ARENAL, Alajuela — My feet leave the dirt path and step onto the metal grating of a gray bridge. I shuffle forward and the suspension bridge gently sways from side to side, making me feel like a monkey on a limb.

Halfway across the hanging bridge I stop, realizing I’m on the same level as the top of the rain forest. I look up to a cloudy sky and feel gentle raindrops falling. I look down through the holes in the steel underfoot and see a sea-green forest floor nearly 200 feet below.

Mistico Arenal Hanging Bridges Park is a spectacular place to get a unique view of the Costa Rican rain forest. A two-mile, circular trail leads visitors on a self-guided hike through the jungle. Along the route are 15 bridges, six of which are suspension bridges (puentes colgantes) that blend spectacular views with a healthy dose of adventure.

On a clear day, a rarity during the rainy season anywhere near Lake Arenal, the park offers unobstructed views of the iconic Arenal Volcano. As recently as 2010, Arenal was famously active, and you could see lava pouring down its slopes, but it’s fallen dormant since then.

The trail at Mistico Arenal Hanging Bridges Park is not a difficult hike, though there are places where it’s quite steep. The steepest part is a 5- to 10-minute descent to a waterfall. It’s quite an experience to see this waterfall from high above on a suspension bridge and then hike to its base.

The reward at the end of the trail was being approached by a friendly but mischievous coatimundi looking for treats in the parking lot. The coati, known locally as the pizote, has to be the cutest animal I’ve seen in Costa Rica.

From encounters with some of Costa Rica’s most interesting wildlife species to the unparalleled view of the canopy from high in the air, Mistico Arenal Hanging Bridges Park offers visitors a full-immersion experience in a tropical rain forest.

Getting there: Driving from La Fortuna, follow the signs to “Arenal Hanging Bridges” or “Puentes Colgantes de Arenal” until you cross Lake Arenal. As soon as you reach the opposite side of the lake, turn right at the sign that reads “Mistico Arenal Hanging Bridges Park.”
Hours: Open 8 a.m. to 5 p.m.
Admission: $24 for adult foreigners, $15 for residents.
For more info: http://www.misticopark.com/en/