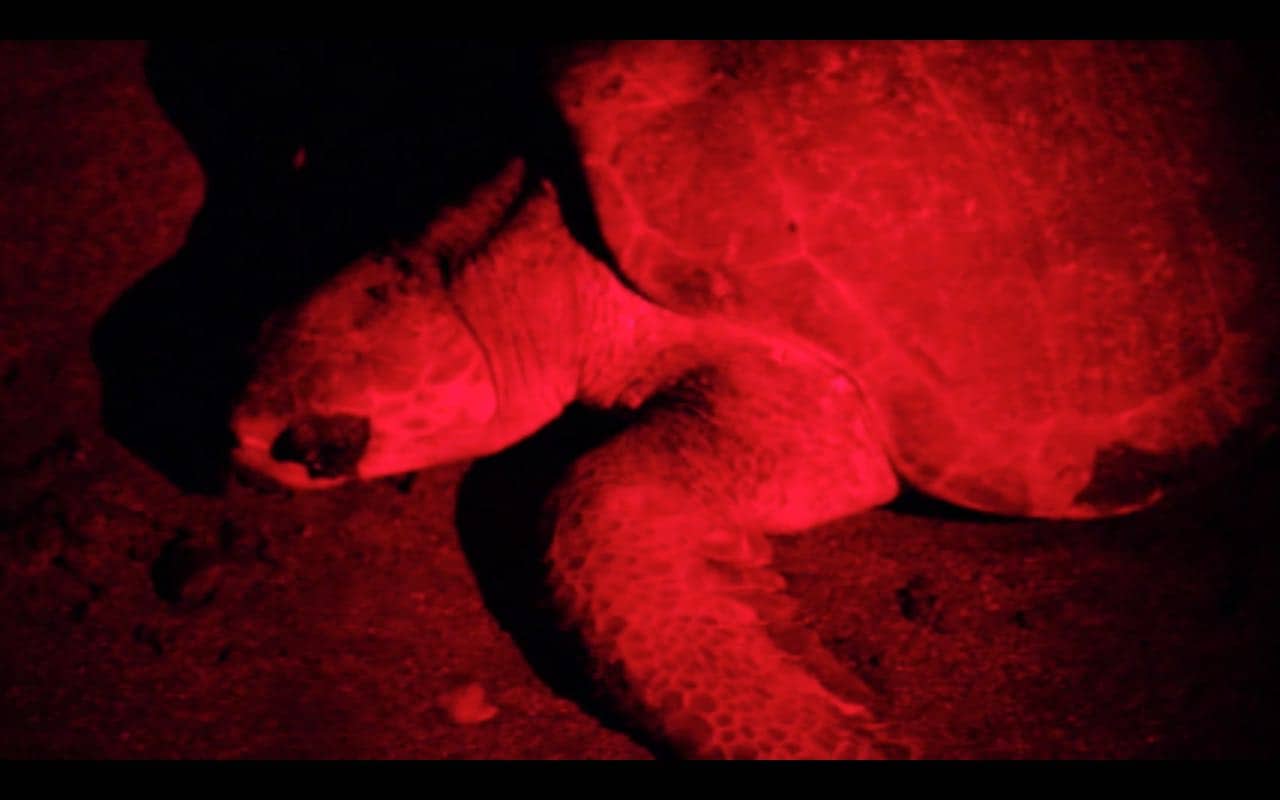 I saw the creek, raised an eyebrow, and braked. Our wheels ground to a halt. Our headlights lit ripples in the brown water. We stared through the windshield. The dirt road that had tormented our Nissan Sentra dipped down into the trench, where the creek flowed past. It looked wide, maybe 10 meters across. In the darkness, we could barely see the opposite bank, much less the road that resumed on the other side, into the invisible forest.

A bridge spanned the creek, but it was off-centered. As if to explain its purpose, a motorcyclist emerged from the distant road and flew over the bridge. The structure jiggled beneath the vehicle’s weight. For a half-second, I thought we could maneuver our car onto the bridge and drive across, but it was clearly too narrow.

Then again, we didn’t know what “it” would look like. The hotelier in Nosara had given us the vaguest possible directions: Drive for 30 minutes, keep left at any fork, and eventually someone would stop us and lead us to the beach. But who were they? And how would they know to stop us? The hotelier just smiled and said we couldn’t miss it. He didn’t say anything about fording a river. If we did have to ford a river, that seemed worth mentioning.

“Should we see how deep it is?” Kylan asked.

We hesitantly opened the car doors. The engine was still running as we tiptoed toward the steep bank. We stared at its chocolate-colored surface. The water was so murky that we couldn’t even guess its depth. It could be knee-high. It could be bottomless.

The road had taken longer than 30 minutes, and we had pushed our Nissan Sentra to the limit. Our compact, automatic white car served perfectly well on Central Valley highways, but the naked rubble of Nosara’s roads had wreaked havoc on our wheels and axle. The dips and potholes were difficult to spot after dark, and oversized gravel tinkled against our chassis, no matter how slowly we rolled along. When trucks and SUVs flew past us, they blew up billows of dust. We had trundled our way here at 20 kilometers per hour. We had narrowly avoided frogs hopping across the road. We were committed. But could we really drive through a river? Wasn’t this how people ended up winning Darwin Awards?

We scrambled back into our car and slammed the doors. We watched through the glass as the two SUVs approached. They were big vehicles, but their bellies were low to the ground, like ours. The first car rolled downward, and its bumper dipped into the water. Then it evened out, the engine hummed, and the SUV plowed across the creek, ascending the other side. It eased past us and disappeared. The second vehicle did the same, its edges dripping in the dirt.

I pulled the car into drive and inched forward. Like the SUVs, our Nissan slipped into the creek, and then I pressed the accelerator. We cut easily through the water, hit dry land, and lumbered our way to the other side. Within minutes, buildings emerged. People appeared on the sides of the road, leaning against cars and lounging in chairs.

When we saw a small wooden shack and a sign advertising tours, I rolled down the window and waved to a group of people sitting stoically on the front porch.

They nodded in unison, then pointed to the front door. We smiled excitedly. If all went well, we were about to see our first sea turtles.

We loved the idea of sea turtles. There aren’t a lot of reptiles I could describe as “adorable,” and despite their snub-nosed faces, shelled bodies, and rough skin, sea turtles are undeniably cute – even the 500-kilogram leatherbacks we had seen in photographs.

There are plenty of endangered marine animals, but sea turtles capture the imagination. They swim with Taoist calm, patiently drifting thousands of kilometers over the course of their lives, just as they have done for at least 100 million years. To think that sea turtles have unhurriedly wandered the oceans since the days of T. rex and brontosauri is beyond comprehension. When we spot sea turtles, we are basically seeing dinosaurs – the dinosaurs that survived apocalypse.

Not only does Costa Rica have two coasts, but many of its beaches also attract nesting turtles. While sea turtles also make their rounds of, say, the New Jersey shore, Costa Rica is particularly beholden to its sea-dwelling chelonians. Communities like Tortuguero attract thousands of tourists because of their docile visitors. Egg-harvesting aside, the Costa Rican economy relies on turtle conservation. Tourists will pay handsomely to see a sea turtle in real life, and that benefits everybody, especially the animals themselves.

But as magical as sea turtle migrations are, they are also confusing. Different species nest on different beaches at different times of year. Before we visited Nosara, I looked up the Ostional Wildlife Reserve, a nearby park famous as a stomping ground (so to speak) for green sea turtles. I was surprised to learn that nesting cycles echo lunar cycles, and because the moon was so full, we couldn’t expect a turnout. I was resigned to waiting months for another opportunity.

But when we arrived at our Nosara hotel, the owner encouraged us to visit Ostional.

“A friend of mine said they are tons of ‘em over there,” said the hotelier. “Just drive over. It’s only a half-hour away.”

Of course, no one could assure us that we would see turtles. Nature works in mysterious ways, and one good night for turtle spotting was not always followed by a second. Even if we drove out to Ostional and found the guides without a problem, there was no guarantee that the turtles would avail themselves. If we were going to go, we’d have to risk driving a long way for nothing.

A young woman invited us inside the office, then filled out two tickets. We forked over ₡4,000 ($8) each, the price we had expected. As the woman – I’ll call her Carolina – tested her flashlight, Kylan asked, “Are there many turtles out there?”

We waited for her to elaborate, then Kylan asked, “How many?”

Kylan’s mouth fell open. She gasped and held her fists in the air, frozen with excitement. “Five hundred and fifty?”

Carolina laughed and shrugged her shoulders. This was apparently nothing new to her.

We rounded the building and headed down the road, and it wasn’t long before darkness swallowed us and Carolina had to switch on her flashlight, a small red circle of faint illumination. The black outlines of trees dispersed, and the sky was a geyser of stars, unblemished by a single cloud. We could make out the gray outlines of froth as waves tumbled over the beach, but otherwise the sand was invisible.

Carolina slowed and stopped. Her flashlight landed on a single spot, and there in front of us lay a turtle.

“Oh my God!” we whispered frantically to each other. Again, Carolina giggled at our enthusiasm.

The rush of euphoria is impossible to describe, just the way Tico friends have struggled to describe their first interaction with falling snow. There are plenty of Costa Ricans who see sea turtles all the time, but I felt the same protective excitement I feel around a pregnant woman in her ninth month. The turtle squatted motionlessly in the sand, a hump of shell the size of a lawn mower. The head poked out the front, the flippers flopped at its side. The turtle didn’t have to anything to do astonish us, only exist. But when the flippers lifted slightly and the head bobbed to one side, we nearly squealed with elation.

“The red light isn’t bright, so it doesn’t bother them,” Carolina explained.

“Are they bothered that we’re so close?” Kylan asked.

“No. We’re not very important to them.”

Then Carolina marched wordlessly forward, and her light revealed a couple more turtles, then a half-dozen. As our eyes adjusted, we saw scores of silhouettes scattered in the oncoming waves. We plodded awkwardly in the uneven sand, wary of each step. The turtles clustered densely, some piled atop each other, others skulking across the ground at surprising speeds. One of them rammed into the sole of my shoe, and I yelped, jumping out of its way. Carolina chuckled, unconcerned.

“I’m assuming they’re not aggressive,” I said, trying to imagine a hostile turtle biting at my ankles.

“No, not on land,” said Carolina. “But in the water they can defend themselves, and they can be very strong. The grip of their jaws could break your arm.”

I caressed my forearm absently and promised myself never to provoke a green turtle on its home turf.

Carolina crouched low and cleared away some sand with her fingers, then aimed her flashlight as the turtle’s rear. We could see the hole that the turtle was digging, and with each scrape of its flipper, another jet of sand shot backward, spraying our shoes. A few paces later, Carolina repeated the process, but this time the hole was finished, and a small pile of eggs had settled below. Then, to our amazement, another egg dropped into the bunch. Then another, and another.

I was startled when Carolina grabbed an egg from the ground and held it against the light, but then I saw the crackled surface. She instructed us to hold it, and Kylan and I took turns rotating the egg in our fingers.

“The shell is very soft,” she said. “This one won’t survive. Only one egg in a hundred will produce a turtle that lives to adulthood.”

Kylan and I had seen video footage of turtle hatchlings scrambling toward the sea, and we had heard about their myriad killers – birds, sharks, predatory fish – so the fact that any turtles survive seemed incredible. Sometimes I pondered the strangeness of a turtle’s journey, how each grows up without ever meeting its mother, then lives for decades meandering through the depths. For a moment that lifespan seemed lonely, those nomadic travels interrupted only by occasional mating. But as I saw them crowded on the beach, crawling over each other, smacking each other in the face with their flippers, casually going about their work of digging and depositing eggs, the turtles seemed perfectly content to do as instinct and evolution demanded of them. They had swum in a vast circle to reach this very beach, whose sands had the perfect consistency and temperature to incubate their brood. If each turtle succeeded in reproducing a single healthy offspring, the species might persevere.

After 45 minutes, we started to trudge back to town. Pools of red light signified the other couples and trios walking down the beach, guided by trained naturalists like Carolina. We had arrived in the middle of an “arribada,” or nesting session. Over the course of five days, the turtles were expected to lay about 10 million eggs in these very dunes, and within three months the turtles would burst from their shells, struggle to the surface, and wriggle toward the water, desperate to begin their lives.

“If you come early tomorrow, around 5 a.m., you can watch them hatch,” said Carolina. “Your ticket will still be valid.”

We remembered the slow and difficult road to get here, and after a few drinks at our hotel we probably wouldn’t rise early. But after we thanked Carolina profusely and got back into the car, Kylan looked at me.

The car roared to life, and we started back down the road, leaving another generation to gestate.