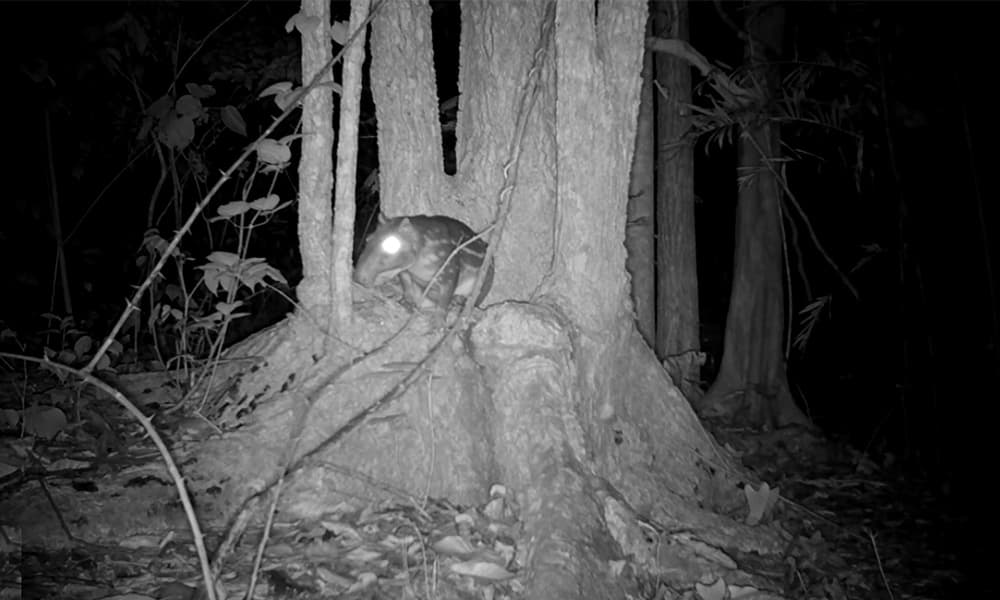 First let’s cover the name. It’s the spotted or lowland paca in English. The scientific name is Cuniculus paca. The internet informed me that at one time there was so much confusion about that scientific name that it took a 1998 ruling of the International Commission on Zoological Nomenclature to set the record straight. Sounds serious.

Much like the madre de culebra (link to previous article?), the spotted paca is another animal that knocks its Spanish name out of the park. Ready? Tepezcuintle (pronounched te-pez-quint-lay). That’s fun to say. As if that isn’t good enough, I looked up a few more names in other countries, and they’re pretty fantastic, too. Guardatinaja in Nicaragua. Conejo pintado (Painted bunny!) in Panama. And my personal favorite – gibnut in Belize. The spotted paca’s name game is strong.

So, what does this thing look like? Superficially, the spotted paca looks like a big rat. I’m not sure how related to rodents it technically is (I don’t want to make any assertions that will run me afoul of the International Commission on Zoological Nomenclature after all), but it looks like a big tailless rat. And thank goodness it doesn’t have a giant gross rat-tail.

That’d be too much. It’s large, coming in at about 20 pounds. It’s all brown with white spots down both sides of its body kind of like a young white-tailed deer. Their eyes are alarmingly big, and they have high cheek bones that makes their faces appear big and boney.

The big boney face actually serves a purpose. Their ‘zygomatic arch is expanded laterally dorsally and is used as a resonating chamber.’ I’m going to be honest with you, I looked that up. But that information jives with information that I have firsthand about spotted pacas, they make insane deep grunting noises.

Spotted pacas are exclusively nocturnal. I have had camera traps recording in spotted paca territory for the last several years and I have never recorded a spotted paca video during the day. During the day they’re hunkered down in deep dens that are often carved into the side of banks near streams. They emerge at night to eat fallen fruit, seeds, seedlings, roots and leaves.

Many an old man has told me stories of how, back in the day, when people did more hunting, they would track a spotted paca back to its burrow and get to work digging it out. Sometimes all of their digging ended in a meal, sometimes it ended in disappointment as the paca exploded out of a hidden exit, disappeared under the waters of a nearby stream.

I’ve worked with spotted pacas at a wildlife rehabilitation and release center, that’s where I really learned to appreciate their fantastic grunting abilities, but I’ve never actually seen one in the wild. I’ve recorded them many times with my camera traps, and I’m happy to share a few of those clips below.