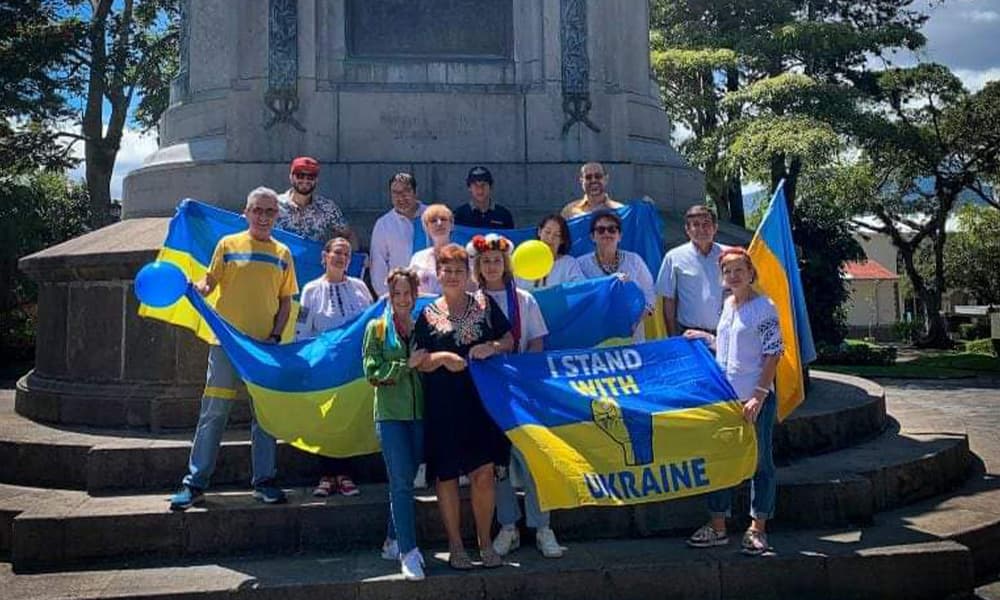 Last November 5 a benefit concert for Ukraine took place in Calgary, Alberta and communities from several countries including Costa Rica, Poland and Japan rallied to the cause by purchasing tickets on Eventbrite and watching the live stream on Youtube.

St. David’s United Church hosted the concert which featured an all star lineup of Ukrainian musical talent including the legendary Ihor Bohdan, and raised $14,677 Canadian ( $11,000 USD).

An important organizational assist for the concert came from Costa Rica’s Ukrainian community. The Tico Ukrainians promoted the concert through ticket purchases, organizing watch parties and contributing a colorfully inspiring greeting video which was screened at the concert.

The first project delivered using the benefit concert proceeds was the purchase of a 14-kilowatt diesel generator for the Lviv State Orphanage which houses 178 kids.

The logistics involved in the purchase and delivery of the generator were administered by Dennis Scraba and Canadian NGO Amigo Relief Missions.  The NGO operates with volunteers, allowing all funds from the benefit concert to be spent directly on projects. Dennis Scraba  commented:

“We would like to thank everyone involved in the November 5 benefit concert for providing these needed funds as the orphanage was really struggling to keep the building heated.”

One of the Costa Rica organizers, Liudmila Kikisch Martiniuk, is from Lviv. I asked her what the purchase of the generator means for the orphanage this winter.

“When Putin and the Russians are bombing energy infrastructure critical to human survival it means LIFE, (heat, light, water, basic services, food, refrigeration, the possibility of all the important basic activities for human beings, as well as increased communication.

This in turn provides emotional solidarity that supports the ability to resist, survive and WIN. This contributes to the VICTORY of an indomitable and glorious people.”

What follows is a short interview with Tetiana Khominch of the Ukrainian Association in Costa Rica.

Can you please introduce yourself and tell us about your involvement with the Ukrainian community in Costa Rica?

My name is Tetiana Khominich, I was born in Kiev, Ukraine but for the past  15 years I have been living between the USA and Costa Rica. I am one of the founding members of the first Ukrainian Association in Central America called Cultural Diplomacy Ukrainians in Costa Rica.

How many Ukrainians currently live in Costa Rica?

I would say between 300 to 400 people from different regions of Ukraine. Interesting fact, that despite living in Costa Rica for many years, we all met and got to know each other only last year after Russia’s unprecedented attack on Ukraine in February 2022. It was a year of great sadness for us, but also solidarity and compassion.

Please tell us about the activities of the Ukrainian Association in Costa Rica?

As you can tell from the name of our non profit association “Cultural Diplomacy”, our main purpose is to promote and bring about awareness of the history, culture, traditions and arts of Ukraine, as well as finding ways to help our far away homeland through collecting donations. All donations go to orphans in Ukraine.

I am proud to say that we organized a very successful Ukrainian Independence Day in Museo Calderon Guardia, then we held the First Ukrainian Film Festival in San Jose, as well as a night of Ukrainian Arts in Barrio Amon.  There are more interesting events planned, please stay tuned.

Please tell us about the Costa Rica Ukrainian Association’s recent involvement in the benefit concert for Ukraine that took place in Calgary last November.

We were very honored to contribute to such a beautiful concert of our colleagues in Calgary, Canada. We purchased tickets as a group, and some of us gathered and watched the show together. It was a great cause to help our country, and we are proud to be a part of it!

For more information about the Ukrainian Association in Costa Rica contact: (506) 8756-0770