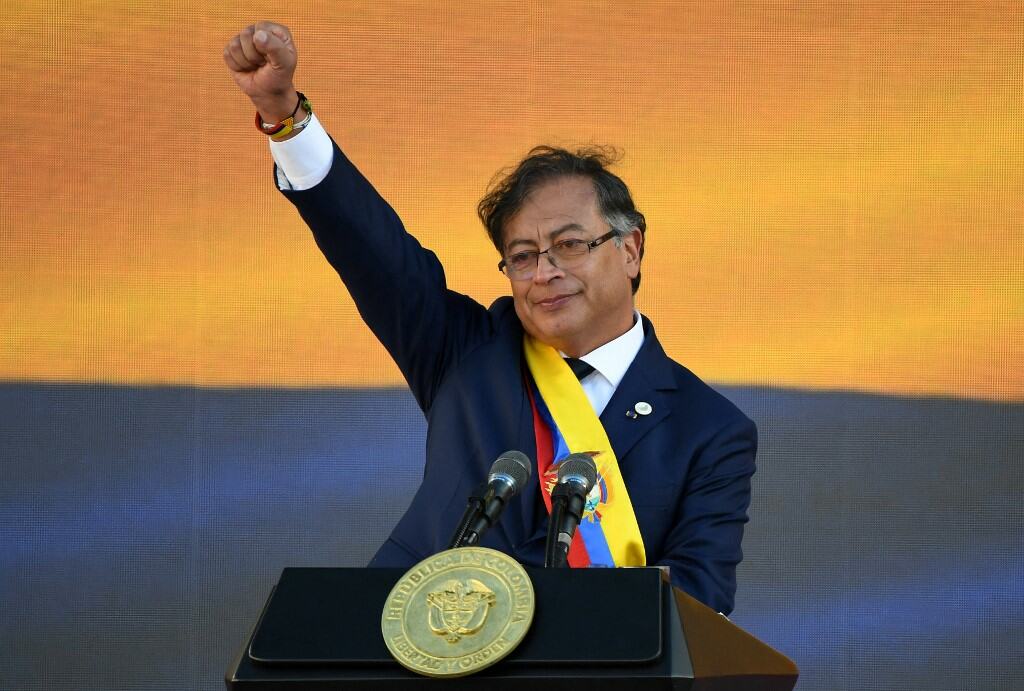 Gustavo Petro on Sunday took the oath of office as Colombia’s first-ever leftist president, before a crowd of hundreds of thousands at his inauguration in Bogota.

The 62-year-old former guerrilla and one-time mayor takes over from the deeply unpopular Ivan Duque, with plans for profound reforms in a country beset by economic inequality and drug violence.

“I swear to God and promise the people that I will faithfully enforce the constitution and the laws of Colombia,” said Petro before the large crowd of supporters gathered in Bogota’s Bolivar Square.

Petro — whose government should enjoy support from a left-leaning majority in Congress — called in his inaugural address for Colombian armed groups to “lay down their arms” and accept legal benefits “in exchange for peace.”

He also took aim at decades of counter-narcotics efforts, saying: “It is time for a new international convention recognizing that the war on drugs has failed.”

And he called for the creation of an international fund to help the deforestation-plagued Colombian Amazon.

On the campaign trail, Petro had promised during his four-year term to raise taxes on the rich, invest in health care and education, and reform the police after a brutal crackdown on anti-inequality protests last year that was internationally condemned.

He has vowed to suspend oil exploration, to promote clean energy and to reactivate diplomatic and commercial relations with the government of Nicolas Maduro in Venezuela, suspended since 2019.

Petro starts from an “enviable position, with a large majority in Congress and, in terms of the street, with support that no government had in recent years,” analyst Jorge Restrepo of the Resource Center for Conflict Analysis (Cerac), told AFP.

Maduro congratulated Petro on his inauguration, saying in a video: “I extend my hand to the people of Colombia, to President Gustavo Petro, to rebuild brotherhood on the basis of respect and love between peoples”.

The Venezuelan leader had not been invited to the ceremony by outgoing president Duque, whose office oversaw preparations for the event.

Duque had also denied a request by Petro to have the sword of revolutionary figure Simon Bolivar present at the ceremony — a decision the new president quickly reversed right after taking his oath.

The sword, which was eventually brought by ceremonial guards to Bolivar Square, was of particular significance for Petro, as it had decades ago been stolen by the M-19 guerrilla group of which he was once a member, before being returned in 1991 after a negotiated peace deal.

Petro’s presidency is historic in another sense, too: by his side will be the country’s first-ever Afro-Colombian woman vice-president, 40-year-old environmental and women’s rights activist Francia Marquez.

The pair will grapple with an economy reeling from the coronavirus pandemic, a spike in violence and deep-rooted anger at the political establishment that culminated in last year’s protests.

On Monday, a preparatory commission set up by Petro said he was inheriting “a level of indebtedness and fiscal deficit that… is critical.” Thousands of Colombians descended on Bogota’s main square to celebrate Petro’s inauguration and his promise of change.

“We feel very grateful… to the millions of Colombians who believed in change and today we are going to start working together hand in hand to achieve it,” said Alexandra Rojas, a supporter of the new president.

Others could not contain their excitement.

“I am happy to see the inauguration of our president Gustavo Petro, what a happiness, I can’t contain it, the happiness is great, the change has happened, the change has arrived,” said Ruth Perez, wrapped in the colors of the national flag.

Petro has promised to implement outstanding provisions of the 2016 peace agreement that saw the rebel FARC movement lay down arms after nearly six decades of civil conflict.

The former mayor of Bogota has also vowed to pursue negotiations with the National Liberation Army (ELN) armed group. Despite the FARC disbanding to become a political party, Colombia has seen a surge in violence.

Thousands of dissidents continue to battle the ELN and powerful cartels for control of drug fields, illegal gold mines and lucrative smuggling routes.

According to the Indepaz peace research institute, there are 90 armed groups with some 10,000 members active in Colombia, the world’s largest producer of cocaine.

Petro has proposed allowing armed groups to hand themselves over in exchange for some form of amnesty. Colombian presidents serve only one term.