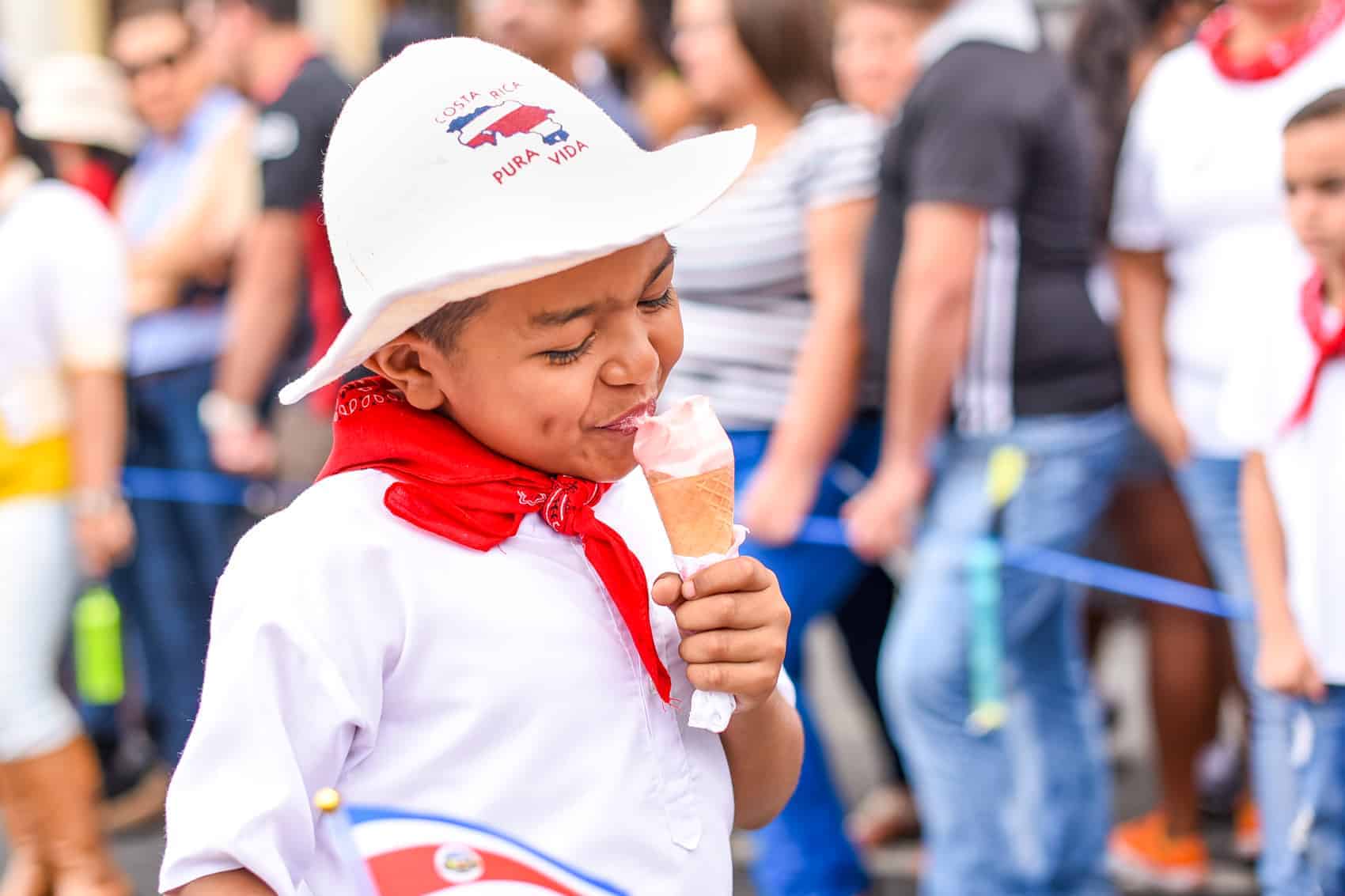 September is an important cultural month in Costa Rica; it is the month of the nation, celebrating the country’s Independence Day.

If you know Costa Rica, you know it’s a country with much love for one another, its beautiful nation and heritage. Respect and pride are seen on every corner, store, home, and even cars in the country.  The nation is colorfully decorated in blue, white, and red, with the honored flag, banners, and other national symbols during this month of festivity.

Although Independence Day is on September 15, celebrations commence before this official day. On the evening of September 14, you will hear far and wide admiration for the country through the national anthem being sung in the homes and streets while broadcast on television and radios. The country becomes united in this moment of patriotism all with the same heartfelt sentiments as they sing of the country’s flag, hardworking people, and honor.

Children are included in the patriotic festivities, as it is a celebration for one and all, giving them the chance to symbolically honor the country themselves. After the country’s singing of the national anthem, the streets come alive with the lights of the children. Known as the lantern parade, desfile de faroles, the children and families take to the streets and towns with their glowing creations in one of the country’s oldest traditions.

As time has involved the lanterns have become more elevated and intricate. Handmade creations of homes adorned with flags are made at school as they learn about the history of their country. Some are made in the home with the family and can even be simple accordion constructions or made with recycled materials in the home and school. There is often a friendly competition between the students to create the most impressive faroles awarded at the end of their walk.

Others choose to purchase their faroles having to decide amongst an extensive variety of choices to honor the evening. No longer are they candle-lit lanterns but led lit designs as elaborate houses and churches, formations of the country’s diverse wildlife, and national symbols like the oxcart. The evening is festive with a joyous spirit in the air as they carry their art with honor surrounded by the sound of music and school bands.

It was in 1953 that the parade of the lanterns became a cultural tradition from the mind of Professor Víctor Manuel Ureña who at the time was the provincial director of the schools in San José. Beginning with close to 10,000 children he instilled and encouraged pride within the country evolving throughout the years into the grand national cultural tradition that is celebrated to this day.

The special evening of the faroles is a symbolic tribute of the night of September 14, 1821, when it is said that a Guatemalan woman by the name of Maria Dolores Bedoya ventured out into the streets gathering support. She encouraged and rallied others to fill up the plaza outside of the government building where the officials were to meet. Rallying for independence, chanting patriotic lyrics, the plaza filled up with lanterns in one hand and support in the other as they awaited the decision of Central America’s liberation from Spain.

The following morning came with much-anticipated news. On September 15, 1821, the official Act of Independence was signed by the representatives. Costa Rica, Guatemala, El Salvador, Honduras, and Nicaragua were now separated and had freedom from Spain. However, it was not until the next month that the news finally reached Costa Rica, advising them that they were no longer under the rule of the Spanish government.

The symbolic torch of independence is a representation of this historic event illustrating the news being spread across the nations by horseback. The torch has traveled a significant distance through Central America from Guatemala reaching Costa Rica. It is passed along in relay-style through the country by chosen students. At its final destination in Cartago, the colonial capital, the freedom torch is used to light the cauldron ending its journey on the evening of September 14.

As one wakes the next day, on September 15, the colors of Costa Rica explode into the streets and homes as the country’s sovereignty is celebrated. This is a day of joy, honor, and festivities for families and the people of Costa Rica. The true spirit of Costa Rica bursts throughout the country and is a pleasure to witness. Patriotic parades take over the towns as people are adorned in traditional costumes with blue, white, and red as far as the eye can see.

Costa Rican traditional dances are performed where the folk dance known as Punto Guanacasteco is beautifully displayed. Music of the school marching bands pass by, drumming, baton twirling, and sounds of the patriotic hymns lifting your spirits. School children practice for weeks and months ahead of their grand performance before stepping out into the streets to showcase their talents.

The students are gowned in school uniforms and traditional clothing paying respect to the special day. However, not only are the streets lined with music and vibrant colors but with traditional Costa Rican foods like empanadas and tamales to enjoy during the celebration.

The flag plays an important role in the day being raised in honor of Costa Rica’s Independence Day and is predominant throughout the parades of the day. The colors are strong and vibrant like its people.

These colors and their meanings are hoisted with dignity and pride, and carried throughout the main streets and towns by children.

Independence Day is much more than a historic date; it is a month-long celebration honoring the country’s independence.

It is very much a time of family and historical celebrations. Children play an important role and involvement in the festivities allowing them to develop a strong sense of civic pride to take with them throughout their years as proud citizens of their nation. It is a time of honor and respect for the country yet at the same time brings families and communities together.

Time is spent preparing for the honored day creating lanterns, decorating the home in the country’s colors, and practicing performances for the patriotic parades. The month brings opportunities for connection, reflection, and appreciation for simple pleasures.

Previous article
Remembering the Sept. 11, 2001 Terrorist Attacks
Next article
6 Reasons Why I Love Costa Rica As An Expat