A Tattoo called him to Costa Rica 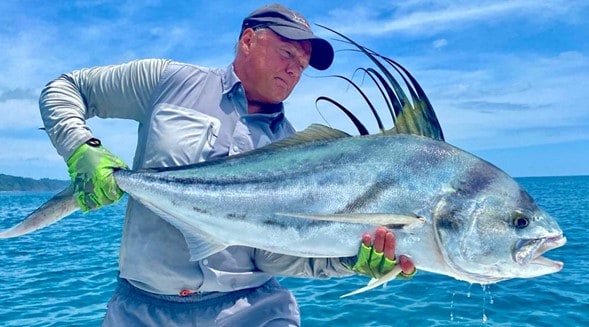 While fishing at Scott Lake Lodge in Canada, Tom Olivo noticed a roosterfish tattoo on the leg of his guide, Cory Craig. “That fish is on my bucket list,” he told Craig. “I run Tropic Fins Charters in Costa Rica during the winter season in Canada and catch them all the time,” explained Craig. That short conversation changed the course of Tom Olivo´s life.

Fast forward 4 years and Olivo has fished 4 seasons in Costa Rica, bought a home on the Osa Peninsula, caught 75 different species including lots of roosterfish and is publishing a book called “Sweet Gulf,” a photo journal of the Golfo Dulce and surrounding rainforest.

The book will highlight sportfishing as well as the flora and fauna of what some say is the most ecologically intense place on the planet. Featured will be lots of his amazing photographs as well as paintings by local artist Tony Reyman.

Roosterfish is the king of inshore fishery here in Costa Rica. Named for its rooster comb dorsal fin and unique appearance, it is fast, powerful and has become the most sought after fish for the traveling angler who doesn’t want to venture offshore for the blue water species.

They are only found in the Eastern Pacific Ocean from Ecuador in the south to southern Mexico to the north. In Costa Rica they average 10 to 25 lbs, with fish over 50 lbs fairly common and considered trophies. The world record is a whopping 113 lbs taken in Mexico many years ago. It is a species that definitely hooked Tom Olivo.

Retired after a successful career of improving people’s lives, Olivo’s first hobby is exercise (physiology), his second hobby is fishing and his third is photography. He went to college (undergrad) at SUNY Cortland where his initial major was exercise physiology. He ultimately changed his major to Geology because of his love for earth science and the outdoors.

Following his NCAA swimming coach career, where he was coach of the year in 1985 he founded a performance measurement company called Success Profiles and had a 30-year career quantifying the attributes of high achieving athletes, business leaders and the business practices of organizations. The last 20 years of his career were focused primarily in the Healthcare industry measuring the causal links with leadership/management effectiveness, high performance cultures and patient outcomes.

Olivo has recently teamed with Jason Schratwieser and Bruce Pohlot of the International Game Fish Association (IGFA) to learn more about roosterfish. Thought was that roosterfish pretty much spent their lives in a limited area, never traveling great distances and staying close to shore.

A fish satellite tagged at Marina Pez Vela in Quepos by Gray Fishtag traveled all the way up into Nicaragua. This study will include taking a small fin clipping and releasing the fish to do a DNA study. Samples will be taken from the Golfo Dulce Costa Rica, Guatemala, and Cabo San Lucas Mexico. The study will last two years.

Olivo will be taking samples but has also listed the help of Crocodile Bay Resort and FECOP in the sample taking process. The largest roosterfish taken in the Golfo Dulce taped out at 106 pounds, although the fish was released and never officially weighed.

The idea is to find out if the roosterfish are all the same species or different subspecies. We have learned for example that Eastern Pacific sailfish which have a similar range to the roosterfish are all the same species and travel great distances in their entire range. That is why all countries need to be on the same page as far as conservation applies and Costa Rica has by far the worst conservation measures as far as sailfish go in all of Central America.

In the sport fishing community roosterfish is strictly catch and release and a study done here several years ago showed they had a 100% survival rate if handled carefully. The fish were caught in the surf line near Matapalo Point. After release they would head out to around 75 feet of water for several hours and then later the same day be back in the surf line hunting bait again.

Olivo now splits his time between Costa Rica and Bozeman, Montana where he is an avid fly fisherman. He has traveled all over the globe seeking trophies with both fly and conventional tackle. You can see his amazing photography and a preview of the stunning fish and wildlife as well as Tony Reymen artwork in “The Sweet Gulf,” at Shop Art (flyfishingportraits.com)