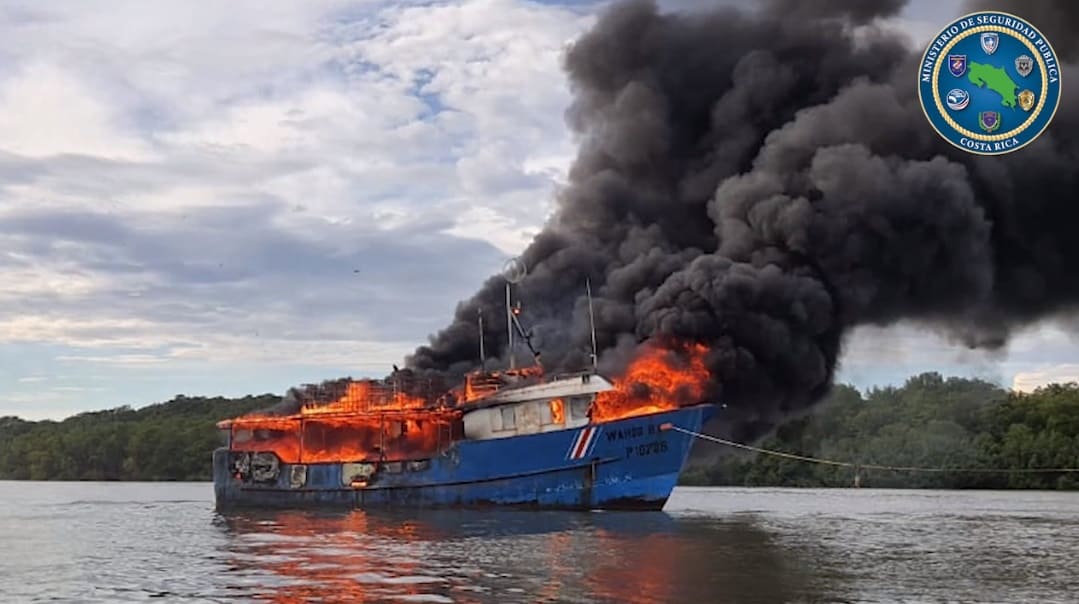 Officials of the National Coast Guard Service, in conjunction with the Costa Rica Fire Department, fought a fire on Monday aboard a shrimp boat named Wahoo B.

Although they had received a 911 alert, the officers saw, from one of the patrol boats that was near the Puntarenas Coast Guard Substation, a cloud of smoke coming from the interior of the estuary.

They quickly went to investigate the area, where they saw that the burning boat was in the middle of being towed by another named the Diana II M.

According to Ernesto Díaz, captain of the damaged vessel, the shrimp boat was being moved to a dam, as it needed maintenance, but on its way over, the motor overheated and this caused an explosion and later a fire.

At that time the boat was only carrying about 30 liters of fuel, which was a blessing as it prevented the explosion from being any larger then it was. Had their been more fuel aboard the boat, there was a good chance that it would have damaged boats that were nearby.

Members of the Fire Department, who were equipped with a bilge pump, got into one of their fast interceptor boats from the Caldera Coast Guard Station and helped them quickly get the fire under control.

The shrimp trawler suffered 90% burns on its structure. Fortunately, there was no loss of life as the four sailors on board managed get off the ship immediately.

So far this year the Coast Guard has dealt with approximately 4 fire incidents on boats.