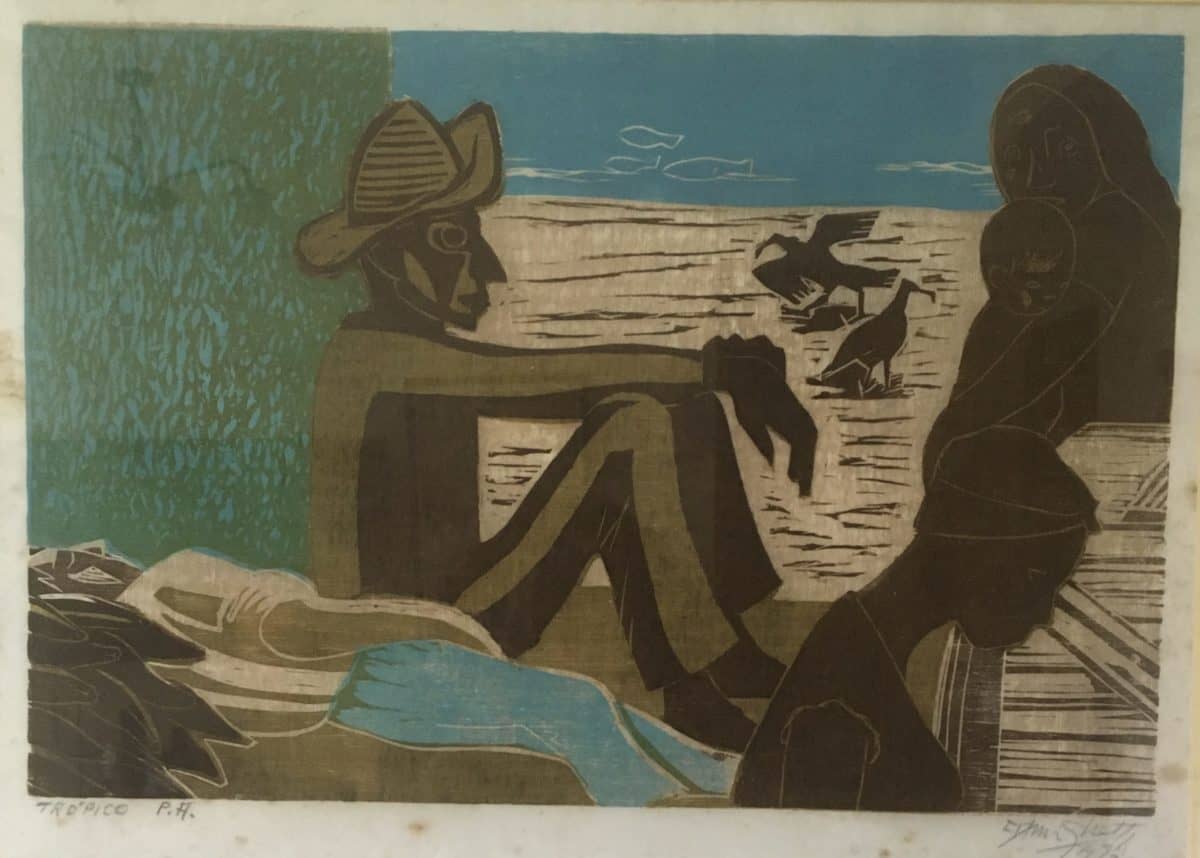 On June 1, 1907, one of Costa Rica’s most famous and influential artists was born within San Jose, the talented Francisco Amighetti Ruiz. Born to Juan Amighetti Petensi and Ángela Ruiz Echeverría, parents of Italian heritage Francisco “Paco” Amighetti’s artistic gift was evident at an early age to those around him.

During his high school years, he attended the main school for boys in San Jose, Liceo de Costa Rica where his ability for artistry and creativity was recognized by his superiors in the school. It was then that it was suggested that his artistic talent be followed through and explored to encourage such a special skill. After graduating from Liceo de Costa Rica in 1924 he pursued further schooling in 1926 to study at the Academy of Fine Arts.

Tomás Povedano was the director during this time, a famous Spanish painter and a strong advocate for believing in the institution helping many aspiring artists to perfect their craft. Francisco Amighetti studied traditional art techniques of drawing and painting. Feeling like he was limited within the methods he only stayed a year, meanwhile working in the Direct Tax Offices as a clerk. He chose to leave the Academy allowing him to break free and explore his abilities outside of the institution on his own.

Recognition and publicity came to him in December 1927, when his work was featured in articles in Repertorio Americano shedding light on his cartoon and pencil drawings with the well-known Latin American artistic magazine. Life continued to move forward for Francisco Amighetti when he would find love with another creative mind also from Costa Rica’s Central Valley, Emilia Prieto, and together they would have two children, Jose Pablo and Cecilia.

His wife, Emilia Prieto was also involved in the arts, becoming an art teacher in several different schools and herself pursuing art classes at the Costa Rican School of Fine Arts. She possessed many creative skills being that of a graphic artist, writer, folklorist, singer, and composer perhaps influencing her husband’s artistic inspiration and imagination thinking.

The Artistic Evolution of Francisco Amighetti

Francisco Amighetti would evolve in a different direction from his training of classical European alongside several other artists as they delved into surrealism and abstract expressionism. This new trajectory continued to lead his thought process to one of the older artistic techniques, xylography, woodcutting.

A technique when a drawing is carefully carved into wood and the areas that are not touched are removed and cut away. What you are left with is an image that is raised and is followed by it being inked. However, prior to this direct method, it was first drawn on the wood or onto paper then it would be traced or glued onto the wood. In 1931, he took this skill to the classrooms in Heredia where he became a professor of drawing teaching the techniques of woodcutting and drawing to the students.

During this time though, he didn’t only focus on one direct form of artistic creation but continued his respected painting talent exhibiting his oil paintings at the National Theater of San Jose and working with publications featuring his drawings, woodcutting, and chronicles. Much of his paintings were that of impressionist landscape paintings. Eventually, travel called to him and he found his way to Argentina where he exhibited his artwork making his way to Bolivia and Peru.

After his time abroad, Francisco Amighetti returned home to his country, and together with a group of like-minded artists they created the Album of Engravings. Making history in Costa Rica, it was the first of its kind in plastic arts. His talents were far beyond just his artwork, he was also a skilled poet releasing 14 poems in 1936 entitled “Poetry”, which was his first published literary work. It is in this year that he found love again with another artist, a Costa Rican painter, Flora Lujan having two daughters together, Olga and Marta. She was a painter of watercolors and oils once working as a teacher of Plastic Arts.

It is in 1938 when he displayed his works of oil, sanguine, and watercolors in his first solo exhibit. Continuing with exhibitions of oils, drawing, and woodcuts, traveling and blossoming his international career he returned to his studies. He expanded to watercolor techniques in the United States on a scholarship at the University of New Mexico. His creativity and prolific artistic evolution would continue to Mexico where he studied mural techniques.

He brought his technique back to Costa Rica in 1948 where he transferred his refined skills to the Presidential House with his fresco mural La Agricultura bringing alongside it some controversy and shock due to its content. With the assistance of Margarita Bertheau in 1952, another stunning fresco mural was created at Banco Nacional de Alajuela. His admired work was extended to several murals for the Costa Rican Social Security Fund and the Lincoln School with themes of indigenous medicine, the work of the rural doctor along with portraits.

During this time, Francisco Amighetti upheld his international exhibits representing his country and providing content as a graphic illustrator all the while maintaining his work as a teacher. However, 1970, may stand out as one of his memorable years when he was honored with the Magón National Prize for Culture, an award recognizing him for his life’s work for the Costa Rican culture, issued by the Costa Rican government it is one of the highest awards one can receive.

There came a point though in 1968 when he left teaching and even his art of watercolor and oil paintings. A new artistic period in his life was to transcend exchanging the black and white woodblock engravings to a color process with chromoxylography. His woodcuts were exhibited throughout the years in San Jose at the Amighetti Gallery and would be the focus for his remaining years.

Working up until his death in 1998 in San Jose, leaving behind an inspirational legacy of over 500 artistic creations. His talents extended across a vast variety of techniques, perfecting them all along the way bringing him international recognition. Many will remember his work for his artistic expression shining beauty and light on the traditional everyday Costa Rican life in his outstanding designs.

Previous article
Darien Gap: Where hell and hope collide for US-bound migrants
Next article
How to Drink Espresso Like a Pro