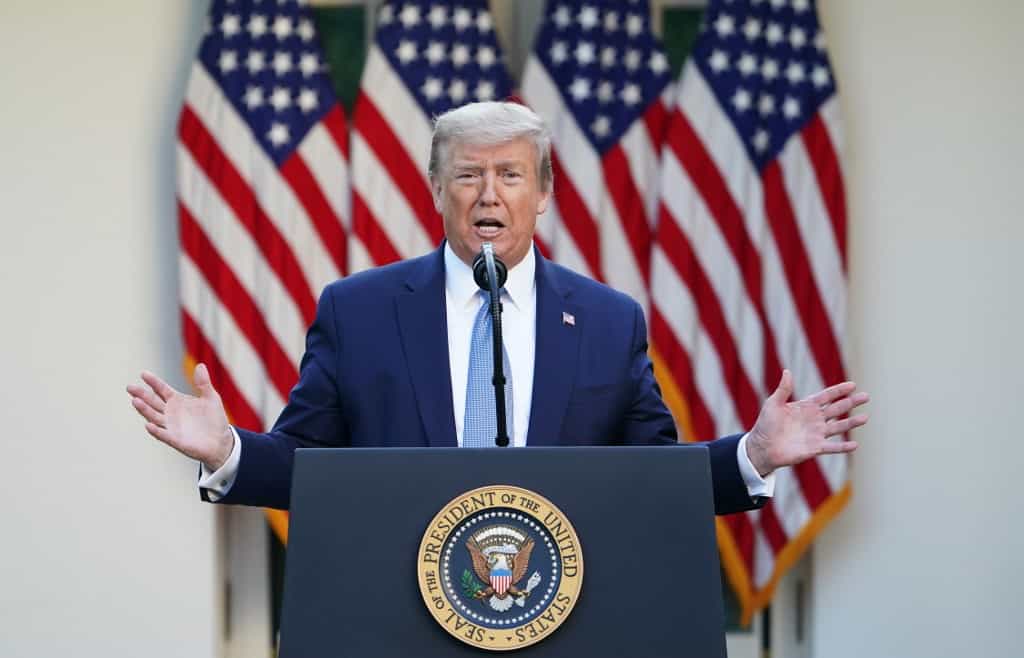 In this file photo taken on April 15, 2020 US President Donald Trump gestures as he speaks during the daily briefing on the novel coronavirus, which causes COVID-19, in the Rose Garden of the White House, in Washington, DC. ((Photo by MANDEL NGAN / AFP))

President Donald Trump was forced off the campaign trail on Friday after testing positive for Covid-19, in a political bombshell that upends his White House race against Joe Biden one month from the election.

The 74-year-old Trump — who has continued to cast doubt on the seriousness of the pandemic, even as the US death toll topped 200,000  — announced on Twitter that he and First Lady Melania Trump, 50, had tested positive and were going into quarantine.

“We will get through this TOGETHER!” he wrote.

Trump’s doctor said the president was “well” and able to perform his duties while self-isolating.

While its ultimate effect on the race remains unpredictable, the thunderbolt news had immediate electoral consequences for Trump, forcing him to cancel a rally planned later Friday in key swing state Florida.

Further ahead, it looked certain the Republican — who is badly lagging the Democrat Biden in the polls ahead of November 3 — would have to abandon a weekend trip to Wisconsin, another battleground, as well as a swing through western states next week.

And a question mark hung over his second televised debate, set for October 15, against Biden — who has made criticism of the Republican’s coronavirus response his key issue.

The Democrat, who was mocked by Trump for his conspicuous mask-wearing as they shared the stage — unmasked — last Tuesday in Cleveland, said he and his wife Jill wished the couple a “swift recovery.”

“We will continue to pray for the health and safety of the president and his family,” Biden wrote on Twitter.

News of Trump’s infection came right after one of his closest advisors, Hope Hicks, tested positive for the virus — sparking fears of a cluster of cases at the heart of the White House.

Melania for her part tweeted that she had “postponed all upcoming engagements” but that she and the president “are feeling good.”

“Please be sure you are staying safe & we will all get through this together,” she wrote.

Trump’s positive test was more than a PR disaster for a president who has staked everything on trying to persuade Americans that fears of the virus are overblown.

The president has been using large rallies — where people often go without masks — to try to change the subject from his much criticized response to the pandemic, vowing in a speech just Thursday that “the end of the pandemic is in sight.”

All that is now on hold, at least for the immediate future, and with the clock ticking on the election.

Now the leader has become the world’s highest profile patient, proving that all the resources of the White House could not prevent the risk.

Technically obese and in his 70s, Trump is in a higher-risk category for coronavirus patients.

Trump’s official physician, Sean Conley, said in a statement that the president and his wife “are both well at this time.”

“They plan to remain home at the White House during their convalescence,” he said.

Covid-19 has reached the White House before now: in May Katie Miller, Pence’s spokeswoman, came down with the virus while National Security Adviser Robert O’Brien contracted it in July.

But Hicks is the most senior White House aide announced to have contracted Covid-19.

The 31-year-old traveled with Trump to the Cleveland debate on Tuesday and was with him again for a Minnesota rally Wednesday, sharing Trump’s Air Force One plane and the even more cramped confines of the Marine One helicopter.

Despite Hicks’ diagnosis, Trump took another Air Force One trip Thursday to meet with donors in New Jersey.

For months, Trump has courted controversy with his insistence that the pandemic is as good as over and that lockdowns ordered in an attempt to beat the virus back were too draconian.

In what has become an overtly political gesture, Trump almost never wears a mask in public.

He has argued he doesn’t need to as he is frequently tested, but the example has been followed by his supporters and many of his aides.

But Trump’s own health experts have often given less rosy assessments of the state of the pandemic in the world’s richest country — and Trump has been especially criticized for his signature rallies.

Biden is running a deliberately low key campaign with social distancing, no large gatherings, and a mask wherever he goes.

At the candidates’ first debate — where they were tested and spent 90 minutes standing close to each other — Trump’s family and supporters in the audience did not wear masks.

This story was updated at 8:05 a.m. Friday with additional context and information.