Truck drivers take part in a blockade at Penas Blancas border between Nicaragua and Costa Rica, in Rivas, Nicaragua, on May 28, 2020. ( (Photo by Inti OCON / AFP))

Under sun and rain, poorly fed and needing to buy water to drink or bathe, Central American cargo truckers have spent days on the border between Nicaragua and Costa Rica, where they were blocked in the midst of a regional dispute over Costa Rican sanitary restrictions in the face of the coronavirus pandemic.

“Here we are in the middle of nowhere, exposing ourselves to being attacked, to plagues of flies, mosquitoes, spiders, everything,” the Costa Rican Mauricio Vásquez, a driver, told AFP while he bathed in front of his truck.

He is one of hundreds of truckers parked in a row along almost 22 km of the Pan-American Highway that leads to the Peñas Blancas immigration post, in the Nicaraguan border department of Rivas.

The crossing was all but closed after Costa Rica detected 50 foreign carriers with COVID-19 and imposed entry requirements to its territory, something that the carriers described as “arbitrary.”

Costa Rica has maintained that its borders remain open, but drivers have waited days for a solution.

They sleep in trucks among the mosquitoes, at risk of contracting dengue, buy gallons of water from locals to drink and bathe, and eat street food.

Spiders, which are abundant in the area, invade their trucks, and to relieve themselves they rent bathrooms or look for a remote place in the brush, in unsanitary conditions.

“Days ago, we were here with my partner, we came with cargo from Guatemala, Colombia and Costa Rica,” says Nicaraguan carrier Henry Soles. 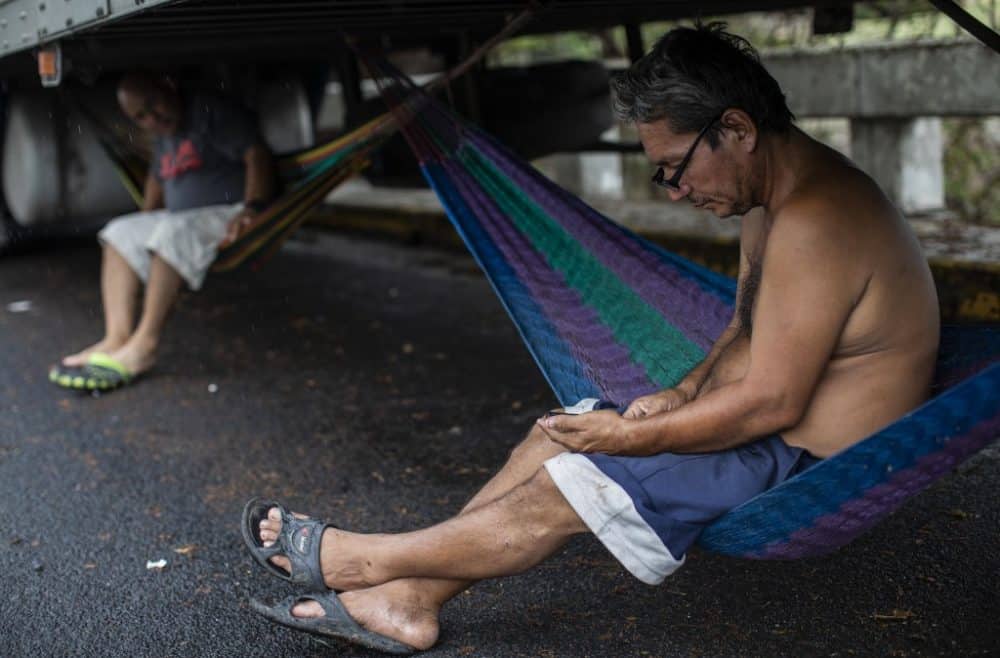 A trucker checks his phone sitting in a hammock tied under a truck trailer during a blockade at Penas Blancas border between Nicaragua and Costa Rica, in Rivas, Nicaragua, on May 28, 2020. (Photo by Inti OCON / AFP)

Hope emerged Thursday after the Central American Trade and Health ministers agreed on a series of biosafety guidelines for the transport of goods to prevent the spread of the virus.

According to this agreement, companies and drivers are obliged to adopt “good hygiene practices, personal protective equipment, cleaning of means of transport” and other health measures for the transfer and unloading of goods, the Central American Economic Integration System (SIECA) said in a statement.

They will also carry out “detection of sick carriers at the entry points,” and temperature measurements and symptom control at loading and unloading points.

“If the carrier does not show symptoms of COVID-19, he or she will take the merchandise to its final destination” but “will not be able to remain in the country for more than the maximum time stipulated by the authorities,” SIECA indicated.

While the agreements are being launched, Nicaraguan Red Cross volunteers at the border carry out health checks on truckers, who have expressed their fear of contracting the virus due to the upturn in cases in Nicaragua.

“We have almost 15 days of being here and no trailer has tested positive for COVID,” celebrated Vasquez.

For the Guatemalan trucker Sergio Pérez, the wait has been a pain.

“Look how we are here … there is no bathroom to go to relieve yourself,” he said.

On Wednesday, tensions at the border were compounded when Nicaraguan truckers blocked the access of private vehicles from Costa Rica in protest.

About 90% of trade between Central American countries is mobilized by land transport.

The president of the Superior Council of the Private Company (Cosep) of Nicaragua, José Aguerri, warned on Thursday that the blockade threatens the region’s supplies in the midst of the pandemic.

More than 24,000 Central Americans have been infected with COVID-19, of which more than 660 have died. The countries of the region maintain isolation measures, with the exception of Nicaragua.