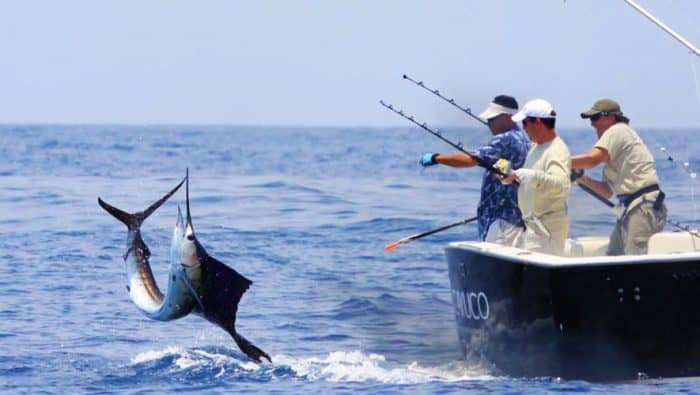 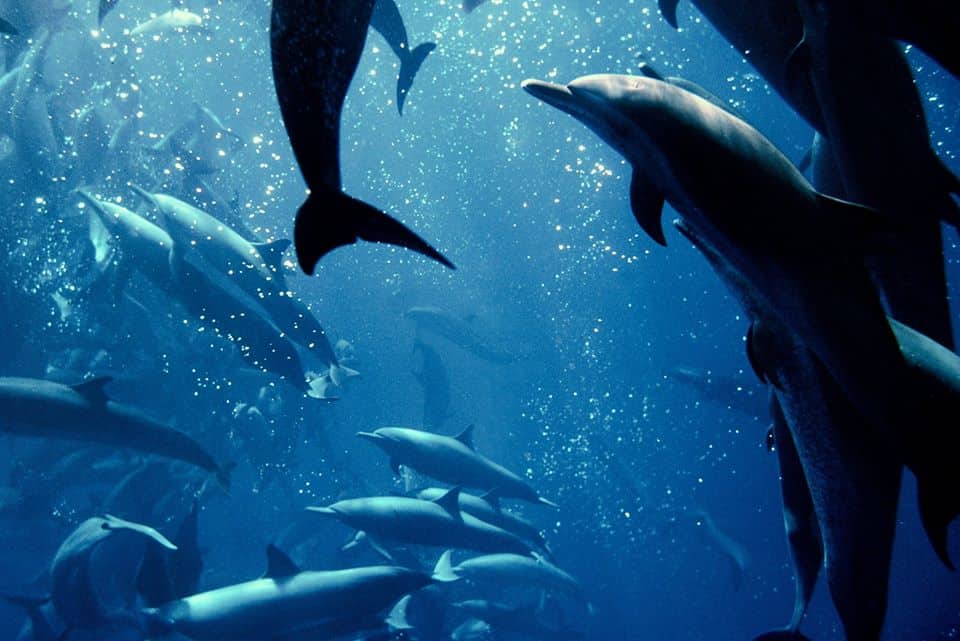 The permanent smile mother nature seemed to put on their faces and their high intelligence are probably some of the reasons virtually everybody loves dolphins.

Costa Rica has two sets of rules pertaining to dolphins. One is attuned to the country’s internationally known protection of their natural resources and applies to Costa Ricans and visiting tourists, while the other is a polar opposite of Costa Rica’s reputation and is connected to the foreign fleet tuna purse sein fishing industry.

Let’s take a look at both.

Regulation for Operation of Activities Related with Marine Mammal in Costa Rica,    #32495

The tour operator must have documents up-to-date on vessel, including boat inspection, insurance, and permits for observing marine mammal issued by SINAC for protected areas and Incopesca for other marine areas, as well as registered with the ICT. Captain and guide must complete a series of courses and receive a zafarrancho, which is a permit issued by the Department of Transportation to operate or work on a boat, as well as a course on the regulations and good practices for approaching marine mammals. A permit called a zarpe must be issued by the Port Captain every time a boat goes out on a tour,

It is illegal to observe dolphins by air unless you are a professional film crew, but only if you have been issued a special permit and for not more than 30 minutes.

All guests observing dolphins must also have an individual permit, again issued by SINAC or Incopesca depending on the area. If the animals make an evasive move while approaching them you must abandon that group. It is illegal to swim or dive with dolphins, to touch or entrap them. Boats can only travel up to 7 miles an hour or the speed of the slowest dolphin in the group and must be parallel to the group.

Near the end of this regulation comes the hypocrisy. Article 19 reads: “Any situation concerning the fishing of tuna involving dolphins (Delphinus, Stenella, Steno and Tursiops, Delphinidae Family, Cetacea Order) shall be governed in accordance with the Convention of the Inter-American Tropical Tuna Commission (CIAT) and the Convention of the International Dolphin Conservation Program Agreement (APICD), of which Costa Rica is a signatory.”

Most people have no idea how tuna for the cannery are caught in Costa Rica. Large purse sein boats that belong to foreign countries are issued licenses to fish Costa Rican territorial waters. Costa Rica has no tuna purse sein boats of its own. They are fished in open ocean, around floating debris like logs or man-made Fish Aggregation Devices (which are illegal but used in Costa Rica) or with dolphins as yellowfin tuna have a symbiotic relationship with dolphins. Spinner and Spotted dolphin are coastal animals, generally living within 60 miles from the coast but sometimes venturing out as far as 90 miles.

When fishing over dolphins, a helicopter will take off from the tuna boat and hunt for large pods of dolphins and then radio the boat when found. It has been reported that some drop explosive devices from the air near the pods to force then to move in the direction of the boat. The tuna below will follow. The tuna boat will move close and begin setting the net, and small speed boats will be launched to race around the pod and herd the dolphins and tuna into the net. Once trapped, the net will be drawn tighter and tighter. To be considered “dolphin safe,” one end of the net is lowered and the dolphins permitted to escape. Crew from the tuna boat jump into the water and grab dolphins who can not find their own way out.

According to the International Marine Mammal Project, by far the largest kill of dolphins in the world occurs due to the deliberate targeting, chasing and netting of spinner, spotted and common dolphin pods in the Eastern Tropical Pacific (ETP) Tuna fishery, using purse seine nets. More than 7 million dolphins have been killed by this method of fishing.  During the late 1980’s, the dolphin kill was estimated at 80,000 to 100,000 dolphins annually. 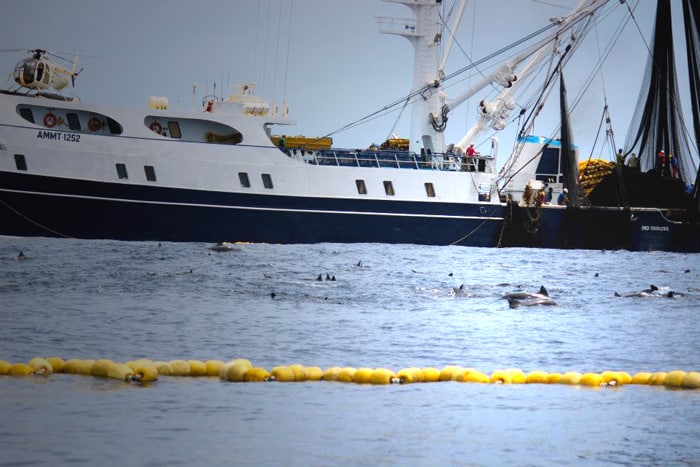 Dolphins trapped by a tuna boat. Photo via Divine Dolphin.

In 1990, IMMP reached agreement with the largest tuna companies in the world to end the practice of targeting dolphins, establishing the “Dolphin Safe” seal, which means no dolphins were deliberately chased, netted, killed or injured (both deliberately and accidentally) during the entire fishing trip in which the tuna was captured. Official estimates are that around 2,000 dolphins are year are killed in the tuna fishery today in the ETP, largely by fleets from Mexico, Colombia and Venezuela that persist in targeting and netting dolphins. Scientists believe these numbers of dolphins dying in tuna nets are undercounted due to a variety of circumstances.

Research Gate has reported lower-than-expected recovery rates have been reported in dolphins. Interactions with the fishery likely elevate stress levels and increase energetic demands, as well as separating social groups including mother/calf pairs, leading to orphaned calves that likely do not survive and are not counted.

In 2014 the “Tuna Decree” was signed in Costa Rica. What it did was to protect four areas, a total of 200,000 square kilometers from purse sein activity. 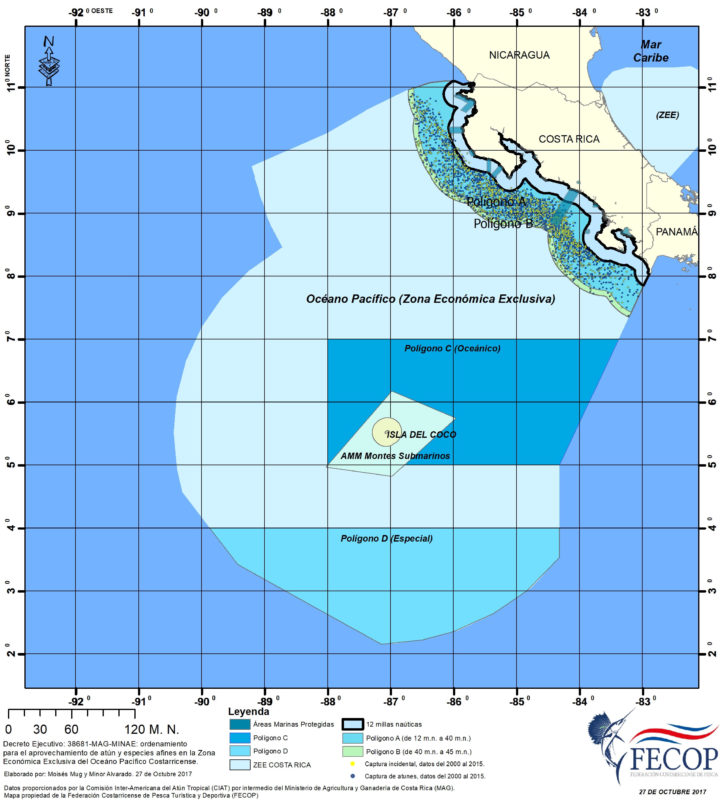 Map of tuna polygons. Yellow circles in Coastal Zone is history of sets on dolphins in that area Via Todd Staley.

Areas include around Cocos Island, important breeding areas and within 40 miles of the Costa Rican coastline. This helped dolphins as well as Costa Rican fishermen who claimed purse sein boats did not permit national fishermen adequate access to national marine resources. Only national fleets are now allowed to fish in the protected polygons using other fishing methods besides purse seining.

Sierra Goodman, founder of Divine Dolphin, has been observing dolphin activity off of the Osa Peninsula for more than two decades and has reported an increase of mothers with calves in the dolphin pods since the Tuna Decree was put in place and purse seiners left the coastal area. 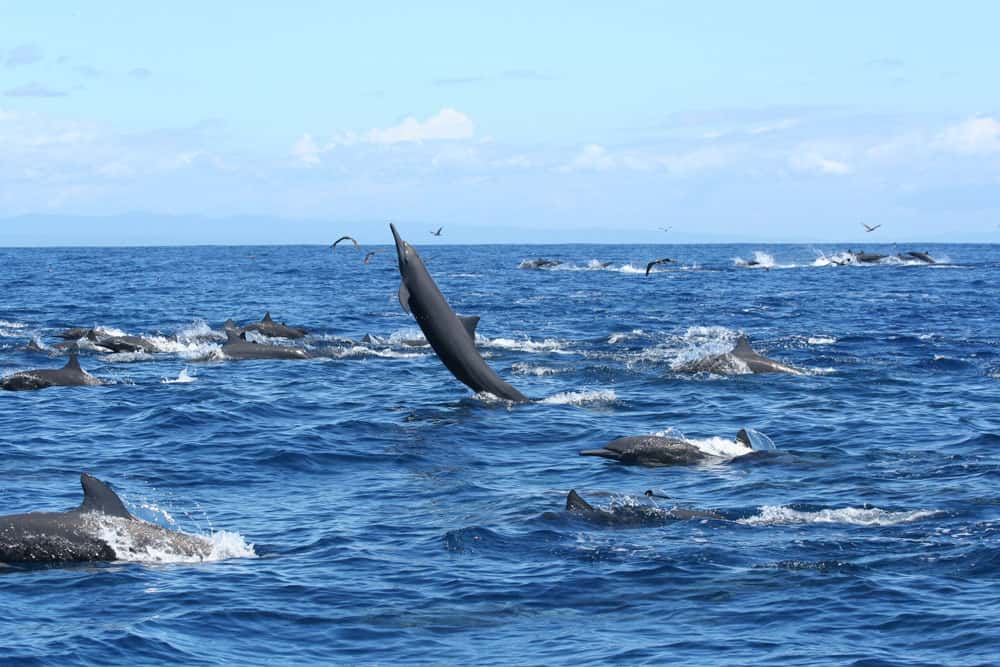 This issue is brought to light again because of proposed law project 21316, currently before the Legislative Assembly, which modifies the fishing law regulations on tuna purse sein fishing. There have been major rumblings from the fishing sectors about a couple issues of the proposal.

The first is moving the purse sein boats from 40 miles off the coast to 60 miles. Opponents claim there is no scientific evidence to justify the move and will limit access for tuna to the cannery in Puntarenas.

Actually, the cannery is limited to just over 9,000 metric tons of tuna each year and has had no problem reaching that goal each year. Analyzing observer onboard records in 2018 showed not fishing tuna boats in the coastal area saved 25 tons of what would have been marlin bycatch. Preliminary reports from the tuna purse sein data show their production has increased with the average catch per net set up in non-dolphin related sets. This is due to the current protection of high reproduction areas.

Analyzing sport fishing reports from 2014 t0 2019 showed catches were up for pelagic species like marlin, tuna and dorado. The only species that did not show a significant increase was sailfish, but that is a subject for a different article. Commercial landings are now being analyzed for the same time period.

Another point of the proposed law change, and opposed by fishing groups, is the registering of Tuna boats as Costa Rican vessels. The opposition says that is nothing more than placing a Costa Rican flag on a foreign vessel, and opens the door for a few Costa Rican businessmen to make huge amounts of money while not helping the national fishermen. Even though the new law doesn’t state as so, national fishermen say it will open the door for lawsuits because the boats, once Costa Rican registered, can fight for rights to fish in the same waters as other national fleets which are currently protected from purse sein type boats.

Since the COVID-19 pandemic began, all national fishing sectors are in dire straits. Moving the purse sein boats out to 60 miles will only help national fleets and of course dolphins, while not affecting tuna production.

One of the most popular tuna brands has a responsible fishing campaign going with one of their postings showing frolicking dolphins. Capturing dolphins to catch tuna is not responsible fishing. At one point, it was probably necessary to fish tuna over dolphin to make production levels. That is no longer the case.