The inaugural flight was welcomed at Juan Santamaría International Airport (SJO) near San José with a traditional water-cannon salute:

“The contribution of American Airlines with its offering of almost 67,000 new seats is extraordinary news for the tourism sector and is an important contribution to national economic activity, whose main driver is tourism,” Maria Amalia Revelo, Minister of Tourism, said when the route was announced.

The routes will operate as follows, according to a press release from the Costa Rican Tourism Board:

All flights will be operated by Boeing 737-800 aircraft, according to American Airlines. Aircraft N917NN, which operated Thursday’s route, is painted in a retro AirCal heritage livery. 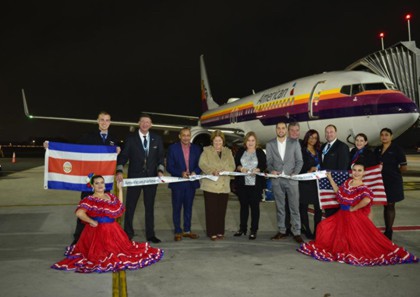