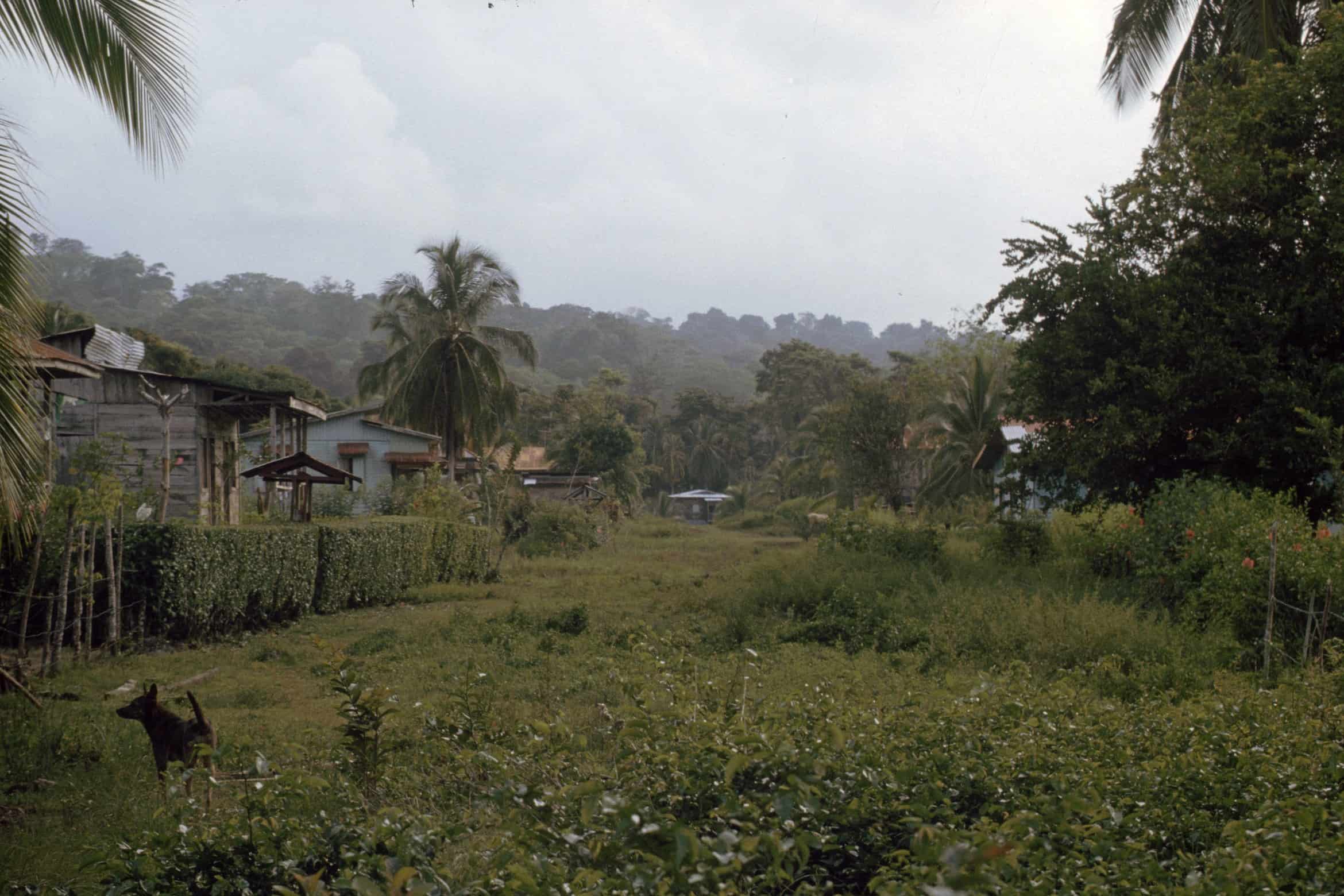 PUERTO VIEJO, Limón — On Costa Rica’s southern Caribbean coast, you’re equally as likely to find a restaurant serving rice-and-bean as you are to find one cooking  gallo pinto.

You might know the area “has a Caribbean vibe,” making it even more laid back in an already laid-back country. Or that the beaches are stunning and have smaller crowds. Or that “ahí viven los negros” — that’s where black people live.

There’s truth to all of these assertions, but they deserve more attention than a matter-of-fact statement.

More than a century of racist laws and policies helped shape Limón. Communities and their distinctive cultures were forged through hardships often condoned by the Costa Rican government.

But now the province’s Chamber of Commerce, Industry and Tourism hopes to turn the region into “a new Cancún,” according to a La República report. The proposal — a $40 million inversion for the first phase alone — would include all-inclusive hotels and new residential areas, in addition to other amenities.

Given Limón’s higher poverty and unemployment rates than the national average, some say investments like these are long time coming. At the time, the news has raised concerns for communities that want to preserve their cultures and control their own futures.

“'[Limón] has its own identity,” said Markus Brown, whose family has lived in Punta Uva, Limón for more than a century, “and we have to maintain the cultural aspects that makes it different from the rest of the country and the rest of the world.” Limón is just 70 miles from San José, but those cities are divided by dense rainforest and imposing mountains.

Through much of Costa Rica’s history, establishing a route between the port and the capital was of high importance — and difficulty.

You can get a taste of the struggle for yourself by hiking “Camino de Carillo,” west of San Jerónimo de Moravia.

After about three miles through the heart of the forest, you’ll stumble upon a strange discovery: The lost town of Carillo. First, you’ll see the large cross, all that’s left of the church. Then you might spot the remnants of a second building. As your trek continues, you’ll find the shell of a car — foliage growing out of every nook and cranny.

It’s a humbling feeling, knowing how quickly nature can erase our existence.

Camino de Carillo was once one of Costa Rica’s most important roads, the first that connected San José to the Caribbean coast. The infrastructure was vital for the country’s development, but the cobblestone route and its many river crossings were eventually deemed too dangerous. It was abandoned by 1900 in favor of a train route through Cartago. What's left of the Camino de Carrillo, slowly being reclaimed by the rainforest. (Alejandro Zúñiga / The Tico Times)

Mankind succeeded, of course, in connecting the capital to the coast. Since 1987, travelers can take Ruta 32 between San José to Limón in less than three hours. It’s not ideal driving — fog, fallen branches and mudslides make it a harrowing journey, especially at night — but spend a night near the road and you’ll hear a constant engine-brake roar of pineapple- and banana-loaded trucks announcing their successful arrival to the Central Valley.

Ruta 32 is a testament to human engineering and turned the Caribbean into a more convenient vacation destination. In 2017, the last year for which data is available, 24.6 percent of international tourists to Costa Rica — an estimated 437,194 people — vacationed on the Caribbean. And those numbers don’t include local tourism.

Those who visit Limón know it’s beautiful and unique. But the reasons why aren’t always as pretty.

Costa Rica has had a difficult relationship with race.

In 1862, a law prohibited certain populations from entering the country, as Dr. Carmen Hutchinson Miller, a researcher at the University of the West Indies with a background in Afro-Costa Rican history, wrote in a 2012 paper on the subject.

It was the law of Bases and Colonization (La Gaceta, No. 191, 8-11-1862) that prohibited the colonization of the national territory on the part of African and Chinese races and empowered the government to forbid the entry of those unwanted populations to the country. On the contrary, the same law of bases and colonization encouraged and protected European migration, setting aside a considerable annual fund from the national budget and offering ten acres of land to each single person, and twenty to each married couple, and for each child under eighteen five acres more.

But Costa Rica loosened its ban to welcome Jamaican laborers in the 1870s, when the country needed a workforce to construct its new rail line — the one that helped make Camino de Carillo obsolete. According to Miller, the project ran longer than expected.

Ads in The Colonial Standard and Daily Dispatch newspaper described a one-year contract for laborers, but the railroad took 18 additional years to complete. (Or it was completed on “Tico time,” depending on your perspective.) By the project’s conclusion, many of the black immigrants had settled permanently in Limón.

Large numbers of Afro-Costa Ricans then proceeded to work on the Caribbean banana plantations of the United Fruit Company, but when disease led the international corporation to refocus on the Pacific Coast, the Costa Rican government discouraged them from entering the Central Valley.

According to Dorothy Mosby’s Place, Language and Identity in Afro-Costa Rican Literature, prior to the country’s civil war in 1948, in addition to laws restricting property ownership by Afro-Costa Ricans, “massive migration by blacks to the Central Valley was prohibited through de facto discrimination,” though it is a “historical myth” that this was codified in law. A man hauling lumber out of the forest and through a cacao plantation in 1980. Photo courtesy The Rich Coast Project, submitted by Daniel Miller.

More than a century later, Limón is the product of a long string of injustices. The province has a large black population — 15.75 percent of the population, according to the latest census — and as a result, maintains an embattled reputation throughout Costa Rica.

For its part, the Costa Rican government has acknowledged a need to further developments in Limón. Former President Luis Guillermo Solís allocated significant financial resources to the province on Afro-Caribbean Day in 2016.

Still, through its geographic and racial divide with the rest of Costa Rica, Limón’s distinctive culture flourished. There, you’ll find not only different foods but different languages (English and Mekatelyu), different music (Reggae and Calypso), different architecture (Victorian and Caribbean mix) and different customs.

But as the region begins to change, some locals worry a flood of foreign industries and tourism could whitewash that culture. Markus Brown, 30, is a co-director at The Rich Coast Project, a non-profit organization that works in Puerto Viejo and nearby towns to empower communities to have “a meaningful stake in their history and their future.”

His family immigrated from Jamaica and has lived in Punta Uva, Limón since the early 1900s, first fishing and then working on the cacao plantations. Brown himself has seen the area transform from times when there were no phones or paved roads and only occasional tourism.

“It used to be a hidden gem,” he says. “Now people come here, and they see that this place is amazing.

The biggest change? Brown points to tourism, which has become a year-long industry and has attracted business owners from other parts of Costa Rica and abroad.

That’s not entirely a bad thing, but there’s a “lack of identity,” Brown explains, when “it’s so important to have an identity with food, architecture, language, even environmental conservation.”

The Chamber of Tourism and Commerce of the Southern Caribbean says a plan to turn Limón into a new Cancún “has nothing to do with Puerto Viejo or the South Caribbean” and rather focuses on the more northerly Limón canton, but Brown expects the project would impact the entire province.

“I’m really proud of my roots, and once you travel, you realize how important it is to have an identity and a culture,” he says. To help preserve communities that have for so long been neglected, The Rich Coast Project — founded by U.S. citizen Katie Beck — focuses on digitizing photos, recording video interviews with local families and producing audio stories that document the area’s history.

It’s a means of protecting the Afro-Costa Rican culture and also of disseminating its value to the rest of the country.

Brown says he’s not opposed to development — after all, focus on the region had been lacking — but that it has been difficult to see small businesses be replaced with chains, and families who have lived there for generations selling their land to entrepreneurs.

And when changes come, he hopes attention is paid to the people who have made Limón unique.

This story was made possible thanks to The Tico Times 5 % Club. If only 5 percent our readers donated at least $2 a month, we’d have our operating costs covered and could focus on bringing you more original reporting from around Costa Rica.We work hard to keep our reporting independent and groundbreaking, but we can only do it with your help. Join The Tico Times 5% Club and help make stories like this one possible.