Soy pico rojo: the new form of protest in Nicaragua 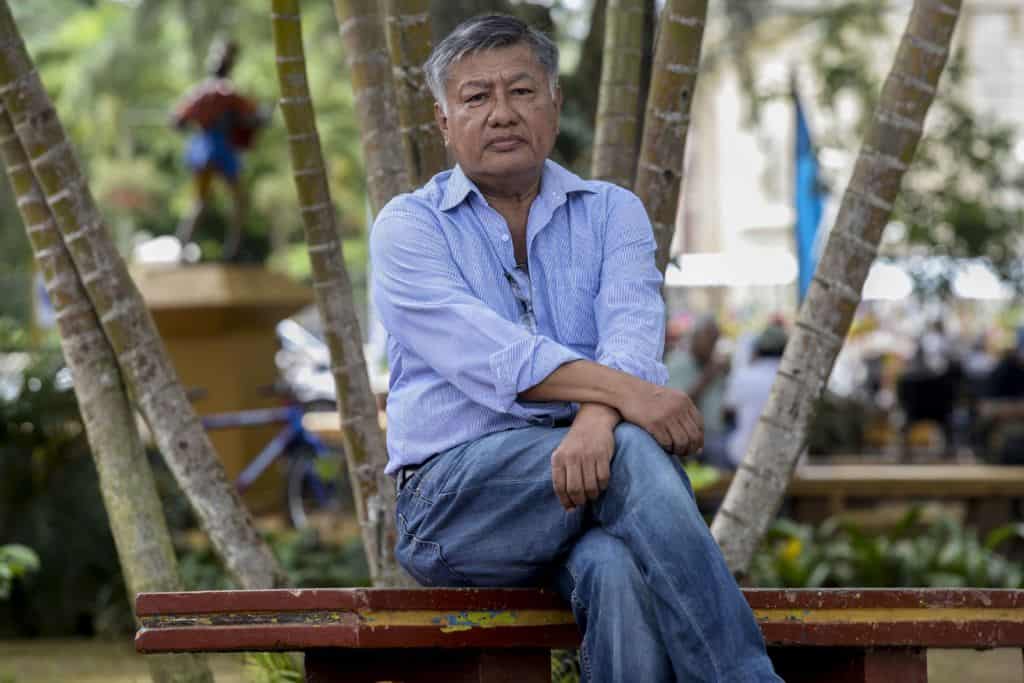 Ex-colonel Carlos Brenes was a guerrilla fighter and high-ranking military man in Nicaragua’s two wars. He’s a friend of Camilo Ortega and well-respected in the army.

There are several framed black-and-white photographs in retired colonel Carlos Brenes’s house. In some he’s seen in ceremonial uniform receiving an award from the army, he’s standing firm in others, and there are also some portraits that he has kept for years with the lonely face of Camilo Ortega Saavedra, brother of the president designated by the Supreme Electoral Council, Daniel Ortega.

During the last few days one of his photographs went viral on social media. He appears alongside no more and no less than a group of high-level guerrilla commanders of the Sandinista Front. Pictured are Germán Pomares, founder of the party; Joaquín Cuadra, retired General of the army; Óscar Pérez Cassar, martyr of the revolution; Francisco Rivera, legendary leader of Estelí; and Daniel Ortega, current president, with his hand resting on Carlos Brenes’ shoulder, who appears shirtless.

More than forty years later there are photos showing Carlos Brenes imprisoned in a patrol car. Click. Standing, hands tied behind his back. Click. Sitting in front of a judge reading his charges. Click. Two steps ahead of two hooded policemen presenting him to the press as the vilest of criminals. Click.

Respected in Sandinista circles, among former guerrilla fighters and in the ranks of the army, Carlos Brenes is currently being accused of terrorism, after allegedly directing the “main terrorist groups in the department of Carazo and Masaya.”

He is one of six Sandinista ex-military and ex-combatants who, for criticizing Ortega, have gone from being guerrilla liberators to persecuted and captured “terrorists.”

Carlos Ramón Brenes Sánchez was charged with terrorism, organized crime, obstruction of public services, and damages to the detriment of the State of Nicaragua and Nicaraguan society.

According to the charges, from April to July, Brenes Sánchez directed the main terrorist groups in the department of Carazo. “He executed and planned with other criminals: murders, kidnappings, torture, assaults, rapes, fires in homes and institutions, creating terror and anxiety.” On Thursday Carlos Brenes was charged with terrorism. (Photo courtesy of LA PRENSA)

He’s being held responsible for carrying out attacks on the police delegation of Jinotepe and the theft of two fuel tanks installed at the entrance of the Jinotepe delegation. “He was also involved in the murder of two policemen on July 8, when they restored public order, to free settlers and international cargo transporters who were kidnapped in Jinotepe.”

According to the indictment, there are photos that prove these retired soldiers held meetings. However, the relatives of Carlos Brenes and Tomás Maldonado – a retired major held captive – assure that both do not know each other so there can be no links between them.

Carlos Ramón Brenes Sánchez is the grandson of a Nicaraguan president, the liberal politician Carlos Brenes Jarquín, appointed president by the Nicaraguan Congress between June 1936 and January 1937, after Juan Bautista Sacasa left power due to pressure by Anastasio Somoza García.

Brenes Jarquín was a doctor and surgeon, a graduate of the University of San Carlos Borromeo in Guatemala. He was born into a wealthy and conservative family in Masaya. This is the photo of historic guerrillas fighters that went viral on social media. (Photo courtesy of LA PRENSA)

In one of Brenes Jarquín’s estates, Juanita Escobar, a native of Monimbó, worked as a maid and was impregnated by the president. Fernando Brenes, father of Carlos Brenes, was born from that union.

As a form of compensation for the pregnancy, Juanita received a house from Brenes Jarquín’s sister, where Fernando Brenes still lives, at the age of 86. It’s also the place where Colonel Carlos Brenes was born 63 years ago. It is a house that years ago used to be a workshop to repair shoes.

Fernando Brenes, Carlos’s father, was a shoemaker and taught the craft to his son since his childhood. Juana Sánchez, the colonel’s mother, was a vendor at the Masaya market. Carlos got into the Sandinista Front and left Monimbó just when he finished high school. He would only return a few years later to accompany Camilo Ortega in the Masaya insurrection.

That’s where his veneration for Camilo Ortega was born. In all the houses that Carlos has lived in, he has hung up a picture of him and said that “he was the best of the three Ortegas.” He named the first of his children Carlos, and his daughter Thelma Segovia. The first name for his ex-wife and the second he chose for being the place where Augusto C. Sandino started the fight. He always said that he would have liked to have another son to call him Camilo.

In addition to Brenes, Daniel Ortega’s government has captured the retired army major, Tomás Maldonado, who was kidnapped for 23 days by a group of paramilitaries and recently appeared accused of terrorism, allegedly part of a criminal group formed by three ex-military and three former members of the extinct Interior Ministry. Humberto Ortega (in the center of the photo), Carlos Brenes (behind the table) y Manuel Salvatierra (with glasses) playing billiards. (Photo courtesy of LA PRENSA)

The retired soldiers are Carlos Brenes and Tomás Maldonado, both captured, and the retired major Roberto Samcam, a critic against the government, who is in exile. The members of the former Interior Ministry are Leonel Rojas Medrano, Álvaro Campos Chávez, and Rodolfo Rojas Cordero.

Carlos Brenes left the National Army with just severance pay for the years he worked there. He was entitled to it, but received nor asked for a military pension. He and his family have always been told: “You are foolish because you were left with nothing.”

The only thing left to Brenes was a ten-block farm, located between Masatepe and Jinotepe, where he grows grains to support himself. His current wife, Salvadora del Socorro Martínez, says that he bought the farm with a loan from the bank, because he says he never received his severance from the army. In his house with Joaquín Cuadra, former leader of the Nicaragua army. (Photo courtesy of LA PRENSA)

In the land located in Los Llanos, Carlos Brenes is dedicated to cultivating coffee, avocado and fruit trees. According to his wife, Salvadora Martínez, he stayed there during the four months of the political crisis.

On Tuesday, Aug. 29, he left his house at 3 a.m. to go to Costa Rica to visit his son, who is a doctor and gives him check-ups and medication every year. At 11 a.m., Martínez’s house was raided by policemen commanded by Commissioner Ramón Avellán, according to the witnesses.

The only “weapons” the police found in the place were two machetes, used to work the land, says Martínez. The photo of Brenes being captured was taken by a journalist who denounced the colonel’s detention at the border with Costa Rica at 1 p.m.

Since 1991, when he retired from the army, Carlos Brenes became a critical voice against the Sandinista Front. He was one of those who pointed out the “piñata,” the process of destruction of the Sandinista party in the 90s, the pact of Daniel Ortega with Arnoldo Alemán, and the abuses of power in the 11 years of Ortega’s presidency.

Hugo Torres, a retired general, said that Carlos Brenes has a clean and neat file, both in the rebellious fight and in the military life. “He was a serious boss, demanding, but respected and loved by the troops,” adds Torres.

After the triumph of 1979, he was granted the rank of commander and assigned to the Fifth Military Region on the Caribbean Coast between 1981 and 1982. He was later transferred to Managua as the second head of the political leadership. At the hand of Daniel Ortega, current president. (Photo courtesy of LA PRENSA)

Torres says that Brenes was the head of the tank brigade and of the Second Military Region of the West. During the rebellion, he led the departments of Masaya and Chinandega, he operated covertly in Sutiaba, León, and was also part of the North Front, next to Commander Dora María Téllez.

“A completely upright person, a military leader and guerrilla fighter, who has been given a lot of respect. He is an example of a leader and military head of an army that evolved to be a professional and that today is being questioned,” said Dora María Téllez.

For Torres, the photo of Carlos Brenes that has gone viral in the recent days, which he believes was taken in Panama prior to the 1979 triumph, sums up the quality of the revolutionary cadre. “He is a man totally consistent with himself, since he joined the fight against Somoza, who has not turned away from that path. That is why he is now in prison, because he has not withdrawn and has criticized this new dictatorship,” said Téllez.

Since his retirement from the army, he was part of a group of ex-military men who demanded basic rights. With this group, he was part of the Broad Front for Democracy (FAD). And it was on behalf of them, and at the request of his brother Fernando Brenes – another retired military man now exiled in Costa Rica – that he read a declaration at the beginning of May at Monimbó square, where he asked Ortega to stop the repression and abandon the presidency.

“That is the reason why [Ortega] has been raging against him. Because he recognizes an honest leader. And because he needs to send a message of punishment to all the Sandinistas who have turned to the blue and white fight and who have opted for the defense of democracy,” said Téllez.

There are several pictures in his house of Brenes playing billiards with Humberto Ortega, brother of the president and former head of the army, and with him hugging Joaquín Cuadra and Manuel Salvatierra. We reached out to Cuadra for comment about the detention of Brenes – his old friend and fighting partner – but until the closing of this edition, he has not responded.

Humberto Ortega and Manuel Salvatierra have not spoken publicly either. With military uniform during the 80s. Carlos Brenes is the third person from the left. (Photo courtesy of LA PRENSA / O. Navarrete)

On Thursday afternoon, while Salvadora Martínez, his wife for 15 years, left him food in El Chipote, Ortega fans who stay outside pressuring the relatives of the detainees, shouted “to pay for their crimes,” and “rebel killers,” while they danced the cumbia of “Daniel se queda.”

Salvadora delivered a packet of food and two bags of medicine to El Chipote policemen. Carlos Brenes has been diabetic, hypertensive and insulin-dependent for the last 30 years. He has to inject two types of insulin three times a day.

According to his wife, he was deprived of medical attention at the Military Hospital for being critical of the current government, and that’s why he traveled to Costa Rica for his son’s medical care. Read the original story in Spanish at La Prensa, first published on Sep. 2 2018.

This story was translated into English and republished in The Tico Times as part of a partnership with La Prensa to help bring their coverage of the Nicaraguan crisis to an English-speaking audience.