5 questions for a Costa Rican painter: How a prison sentence sparked a passion for art 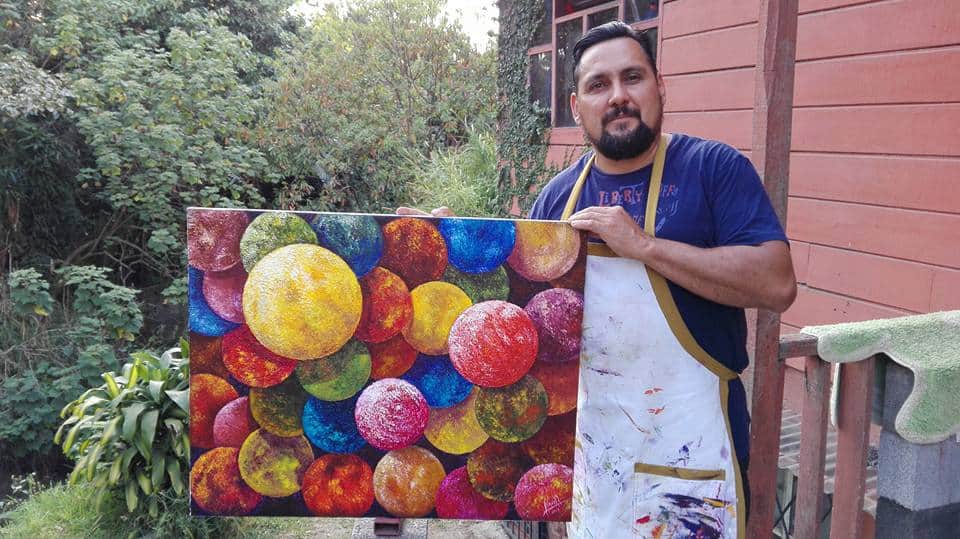 “I was born in Puntarenas, The Pearl of the Pacific,” says Navil Leytón, 44, with pride. The first painter in his family and a musician since the age of 14, Leytón specializes in the spatula technique and was recently accepted at the Mondial Art Academia in France.

Leyton, who believes that “knowledge is nothing, if not shared,” has also been participating since the start of this year in ongoing painting workshops for inmates at Costa Rica’s La Reforma prison, through artist Juan Carlos Chavarría’s Foundation for Transformation in Violent Times. The project is particularly meaningful to Leytón because he was once an inmate, too, and discovered his own love for painting while behind bars after meeting artist José Fernández and eventually building a painting workshop at La Reforma. He continued to follow his passion after leaving prison and has found success.

By being part of this project, Leytón wants to support the men at La Reforma and show them there are ways to achieve their dreams after they serve their time.

“Art in general is a state of freedom,” he says. “Man has always sought to make art. The point is to give him the space to make art; if the person feels that he has that opportunity, he will do it.”

The Tico Times visited La Reforma and talked to the artist about his experience in prison and his identity as an artist. Excerpts follow.

What was it like to learn and to paint while you were incarcerated?

We painted in the impressionistic style, houses, meadows, rivers …. and with that I provided sustenance to my family while I was there [in prison], because we had the opportunity to present our works on Sundays and people bought them. We had to sell them really cheap, because the prisoner can not sell like he would on the street. There is no other way for him to support himself. So many people, because of the economic opportunity, sometimes are lucky and find very good works.

When we started painting, we sent a letter through a pastor to a hardware store asking for donated material. Since I’m an industrial welder we were given materials, and we built the first painting workshop in Puesto Diez. Four of us started painting there, and I spent the four years there, in that workshop.

When you left prison, how did you start your career as a professional painter?

Once I was on the outside, I wanted to continue painting, but I had to work, and I didn’t have time to paint. In Costa Rica, people do not really live off of art. I worked as a welder and began to paint from time to time when someone placed an order, or just to hang out… from 2007 to 2010.

Then I decided to paint in a more professional setting. My friend and renowned painter Armando Fallas had an exhibition at the Louvre Museum almost three years ago. He came back and told me, “Navil, you can, too. You just have to develop your own identity in art. ” How did you develop that identity?

I was static for a while; I didn’t know what to do. But I’ve always been a good reader and I graduated in theology, so I made the decision to read more deeply about philosophical topics. A little more of Nietzsche, of Homer, Plato, Aristotle. And my mind boomed.

Then I bought Nietzsche’s book “Thus Spoke Zarathustra” and Aristotle’s “Metaphysics,” and it was even better. I gave up television, soccer, and all the things that human beings normally do and that the world wants. I began to read a lot and began to paint using totems or other elements for personal representations: for example, planets or spheres for human thoughts, stairs as the development of the educational system, women as society. And I developed the technique of using a spatula. I owe to reading what I am today as a painter. What kind of topics have you developed in your paintings?

The first exhibition was about social inequality, 13 works. There were two pieces that weren’t accepted. One is called “Homicidal Society”… It is the face of a woman crying, which is society, and a wall dividing the social classes between abysses, and blood spilled in the street. Some doors with stairs reach darker parts. So it’s a very strong social critique, and although I was not given the chance to exhibit it. The other one is a woman lying on her back, arms and feet tied, in the air, above a chess table with a pawn. That means a gagged society, and as it happens, that’s what they did: they gagged me, covered my mouth and told me I couldn’t exhibit the work.

How did you get involved in this project at La Reforma?

In January there was an exhibition and the stand of [artist and La Reforma project organizer] Juan Carlos Chavarría was next to mine. We began to make conversation. I don’t like sharing the fact that I was imprisoned, but in this project I like to do it to show the boys that a person who was imprisoned can go on to do what he wants if he manages to find the “superman” inside himself. So, I shared my story with Juan Carlos and he told me about this project, and here I am collaborating, trying to give a message of hope to the boys. We want to start another workshop to Puesto 10. I would like to make pictures of literary figures. We can paint feelings, but each feeling is based on knowledge.