Sixth edition of the Envision Festival inspires music and love

During the sixth edition of the Envision Festival, Rancho La Merced in the southern Pacific beach town of Uvita filled with art, culture, music, permaculture, and contact with nature. Thousands of tourists from around the globe came to Costa Rica to visit Puntarenas and created a love-sharing community for four days.

The self-expressive festival exceeded expectations: besides the great music and the fantastic workshops, the best thing was definitely the energy. Attendees always seemed to have smiles on their faces, offering free hugs (including those from “hug dealers”), sharing hammocks, forming singing circles, and indulging in self-expression at its best, being yourself without any kind of judgement. The festival also provided a huge canvas for those seeking to share their experience through art.

The highly anticipated festival kicked off Feb. 25, and participants received an unexpected welcome: Uvita inaugurated it with a rainy afternoon, a surprise during the ongoing dry season. Many people had set up their camps the day before, but the bulk of attendees arrived that day, and more than one had to struggle to pitch their tents under the rain or try to keep their stuff dry. This couldn’t dampen festival-goers’ spirits, though: as the sky started to cloud, they began singing songs or howling for rain, and when the rain began to fall, people came out of their tents to enjoy the downpour.

After a couple of rainy hours, the sky was clear again, giving the full moon and a million stars the chance to shine brightly upon four stages playing music throughout the night, with attendees dancing tirelessly.

Despite the late night, “envisioners” got up early to start the day with pilates, with instructor Amber Zuckswert, and capoiera, with instructor Michelle Bouvier, followed by yoga, dancing, hugging and partnering workshops. At 8:30 p.m. hundreds visited the Sol Stage to watch Costa Rican talent including tropical disco band Patterns and the popular Sonámbulo Psicotropical, which kept every single person dancing as the band celebrated its 10th anniversary. On the other side of the festival site, people danced to electronic music and witnessed fire performances. 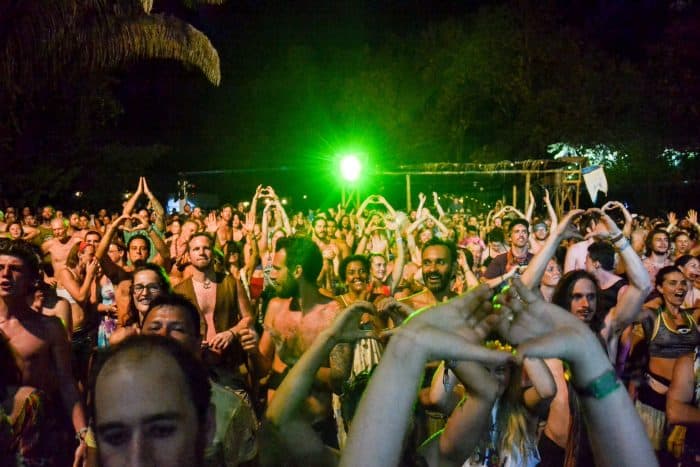 “I love the opportunity to be part of something really special, and that a lot of people in the world never get to experience,” a festival-goer identified as Dreamer told The Tico Times. “We do things here that a lot of people dream about doing, or wish they could do. But people here are actually dedicated to working on [those dreams].”

On Saturday morning at about 7 a.m., you could see some sleepy faces peeking out of the tents, as well as some others who were just going to sleep. However, there were other fresh faces as well around the village, the common space, where people were having breakfast, doing yoga, and sharing time together. Envisioners were getting prepared for the third day of the festival.

The top events of the night began at 8 p.m. with Costa Rican musicians Lucho Calavera y La Canalla, who revved up the crowd to receive California electronic group Beats Antique, which attracted hundreds of audience members. It was such a great show, no one could stay still. With the moon high in the sky, marking the beginning of a new day, Costa Rican duo Santos & Zurdo came up to the stage to give a shocking show that ended up with dozens of fans on the stage.

Sunday morning arrived, and by 8 a.m. most people couldn’t sleep because of the hot sun, so they looked for other options like one of the comfy hammocks hanging on the trees at the village, or taking naps in the shade of a tree. The structures around the festival were all made with bamboo and wood by the building crew and dozens of volunteers. 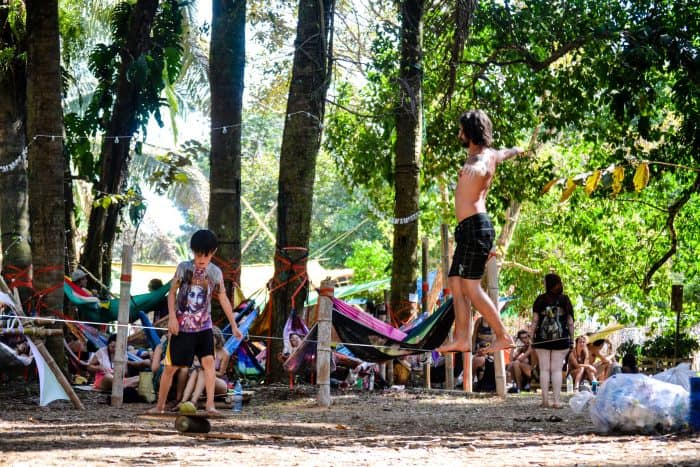 It was the perfect day to visit the beach and take a dip in the waves, or just sit and listen to the music of the drummers filling the environment with positive vibes. At 4 p.m, the doors to the beach were closed, and inside the festival, people started to prepare for the main shows of the last night.

“I really love it. It’s not only about the music, it’s also about being together, about being community, having a good time together. I’m really happy,” said one attendee, who has been to Costa Rica for approximately five months and decided to stay a little longer and be part of the Envision experience. “I come from Belgium. That’s a very different climate, so to me the most amazing thing about this place is to see everyone relax, like everyone is on holiday, you know. Really open-minded.”

The closing of the festival took place at Sol Stage: a gathering ceremony where organizers and the rest of the staff said goodbye and thanked attendees for their presence at this year’s festival. Costa Rican reggae band Un Rojo took the Sol Stage at 6:30 p.m., followed by indie acoustic project Elephant Revival, while at the Luna Stage you could listen to the music of Colorado-based Cualli. At midnight, the Envision Orchestra gave a performance to say goodbye to everyone enjoying their last hours of the festival.

On Monday morning, you could still hear the music of the live electronic composer, multi-instrumentalist and producer David Block, The Human Experience. The electronic sound gave energy to the thousands of envisioners getting prepared to get back home, and to some who had already started to pack their tents and leave the grounds of Rancho La Merced.

Tired faces were everywhere, but many wished the festival would go on longer: Envision is not only a music and yoga festival, but also a lesson on the value of being yourself and sharing in community. A real partnership. A peaceful and completely heart-filling community.