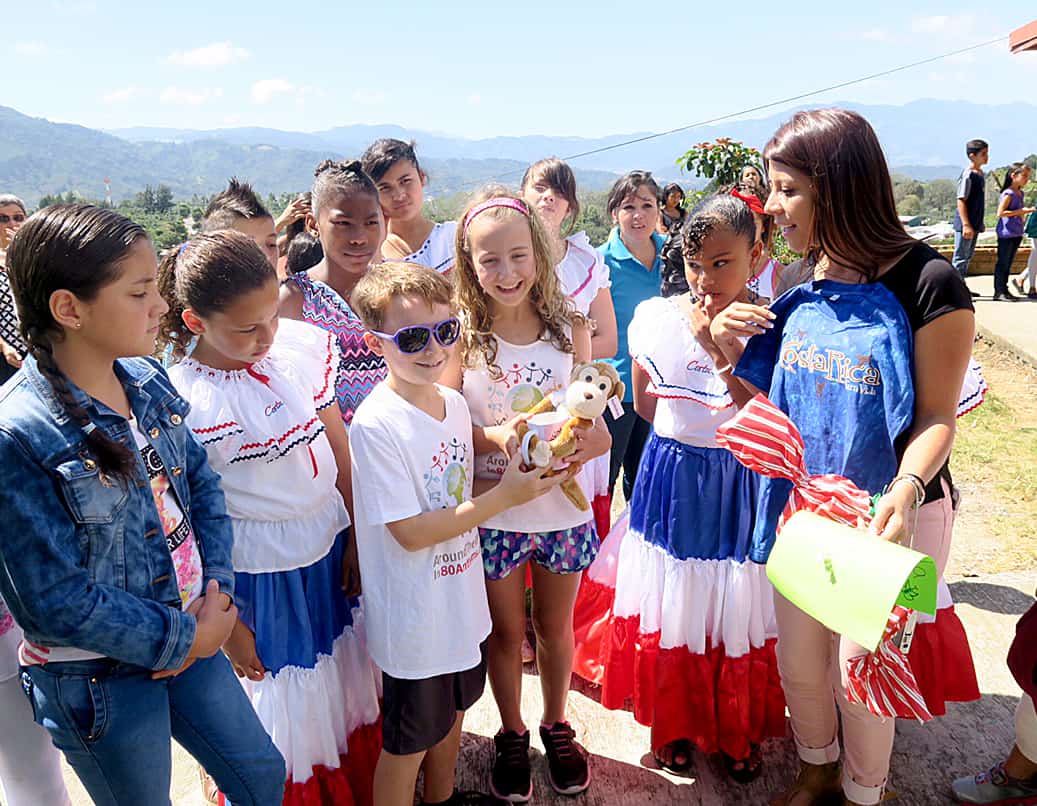 Capri Everitt and her brother Bowen at a SOS Children's Village in Tres Ríos, Costa Rica. ((Courtesy of 80 Anthems))

“Around the World in 80 Anthems” is the name of one family’s initiative to help children around the world. The four members of the Everitt family, of Canada, are making a nine-month trip to 80 different countries; in each nation visited, 11-year-old Capri Everitt sings that country’s national anthem in its original  language. The trip began on Nov. 20, 2015, in Canada, and stopped in Costa Rica from Dec. 30-Jan. 2.

Through its efforts, the family expects to raise $1 million for to the international nonprofit SOS Children’s Villages, a global federation dedicated to “prevent family breakdown and protect and care for children who have lost parental care, or who risk losing it,” according to the organization’s website. In Costa Rica, the organization provides day care, educational and medical services, and other support to children, young people and families in three locations: the Caribbean port city of Limón and the Central Valley towns of Santa Ana and Tres Ríos, where Capri sang the “Himno Nacional” during the family’s recent visit (see video).

At the Canadian kickoff of the tour in November, which took place in Ottawa during Universal Children’s Day celebrations, Capri sang the Canadian national anthem and delivered a speech as SOS Children’s Villages’ youngest Youth Ambassador. Capri has now sung the national anthems of several American countries; the family will finish their journey through America in Brazil, on Jan. 28, and then fly to New Zealand and continue on to the other 55 countries on their list. They will finish their tour in the United States on Aug. 20.

All money raised will go directly to SOS Children’s Villages, which aids children who have been affected by war, poverty, climate change or other unfortunate circumstances around the world.

“When I found out that there are about 18 million orphans that are at risk of diseases, malnutrition, and death, I knew I wanted to help,” Capri said in a statement. Singing the national anthems was Capri’s idea; since many children in the countries she’ll visit may not know the same songs she does, “by singing the national anthem I plan to get as many children as possible to sing with me.”

To date, the family has raised approximately $23,000, having visited 18 of their planned 80 countries. SOS Children’s Villages plans to distribute the money to villages throughout the visited countries according to need, the statement said.

While Capri sings the national anthems hoping to use her voice to “help children get access to clean water, food, and a safe roof over their heads,” she is accompanied by her parents and 8-year-old brother Bowen, the author of “Bowen’s Blog,” where he describes the events of their journey.