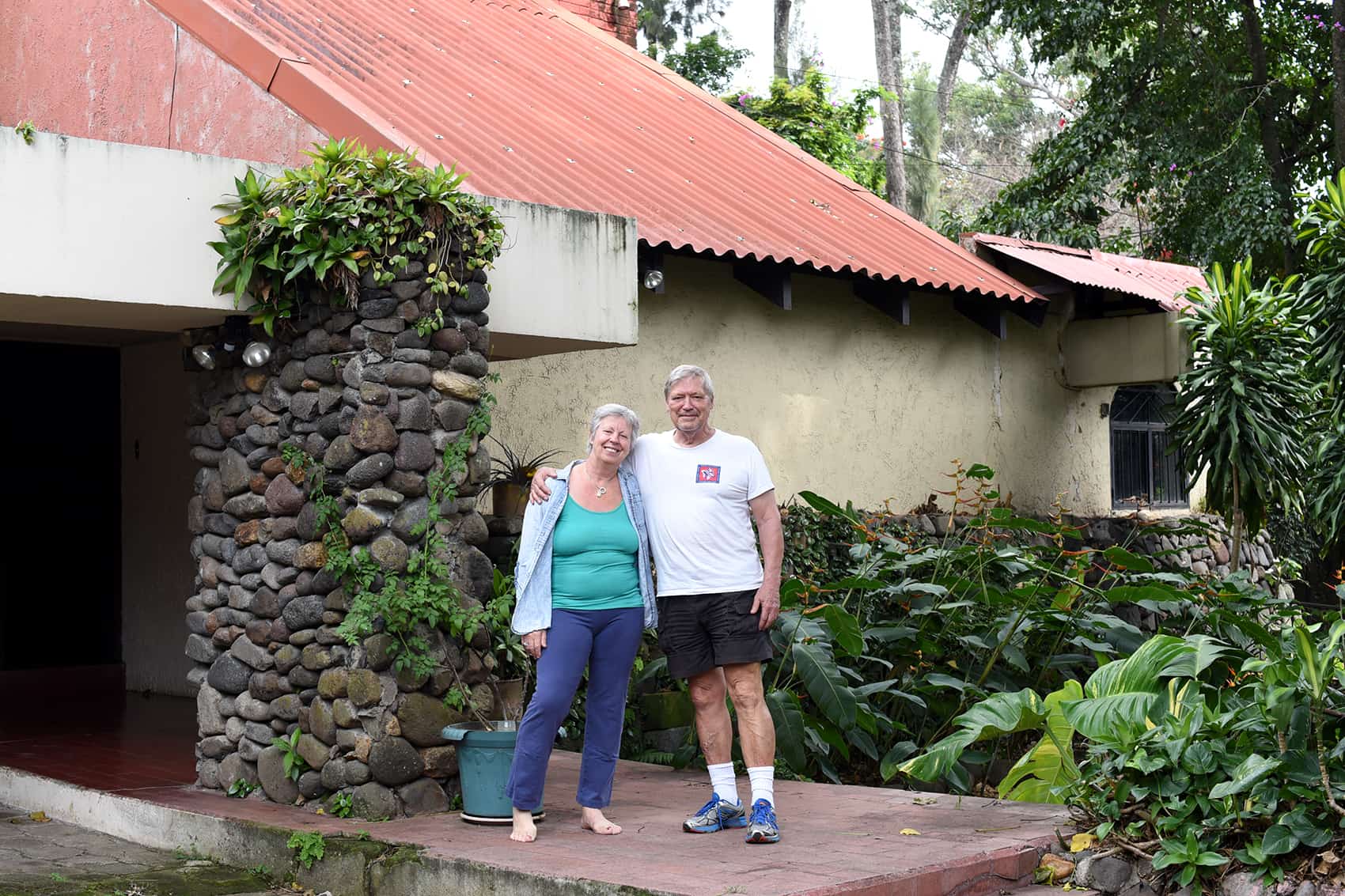 Little Theatre Group President Annette Hallett and her husband, Bruce Hallet, now share a home with the LTG, which uses part of the space for performances and rehearsals. (Alberto Font/The Tico Times)

The Little Theatre Group (LTG) is celebrating. The oldest continuously running English-language theater group in Central and South America – founded in 1949 by Albert Williams, best known as “Bert” – has finally found a wonderful home in the San José suburb of Escazú where its 135 members can rehearse and perform. They are filling the space with a packed schedule of events: theater brunches, movie nights, and, this weekend, a program of monologues and short plays.

While the LTG has been housed in many locations over the years, each has been fleeting. In its early years the group performed at the National Theater and at the Eugene O’Neill Theater at the Costa Rican-North American Cultural Center in San Pedro, but they didn’t have their own specific headquarters.

LTG has always had many faithful followers, but some of them lost their connection to the group because there was no fixed place to reunite, which was a sad situation for the ensemble. The group saw itself as homeless for a long time, until a “godmother” – as Ann Antkiw, one of the current and longstanding board members of the group, calls her – appeared to save the day in 1998. Blanche Brown, then president of the group, built a 72-seat theater on the back of her house. This was a lifesaver for the LTG.

“Rising rents, the lack of rehearsal space, plus the cost of storage space resulted in the prediction of financial doom. The final curtain call appreared imminent” before Brown’s decisive action, Antkiw told The Tico Times in a recent interview.

The Blanche Brown Theatre, as it was called, was a great home for the group, but it closed its doors in 2008, leaving the LTG homeless once more. Ever since, the group has been performing at various locations around the country.

The current president of the group, Annette Hallett, her husband Bruce Hallett, and members of the board started searching for an affordable space that could be rented as a more stable headquarters.

“We couldn’t be more delighted, because history has repeated itself and the LTG’s dream has come true again. It materialized this past August in the form of a large house and huge garden in San Rafael, Escazú,” Antkiw said. “The main room accommodates small cast productions and is used as a rehearsal space. It can be rented for meetings, but always depending on availability, because the LTG wants to use the space as much as possible and already has a busy program planned.”

The Halletts are living in the house, and are splitting the space and rent with the group. It is a large, beautiful home, nestled amid stunning gardens. The thespians have set up facilities including men’s and women’s dressing rooms, a storage room, and a room that serves as a bar where drinks can be offered to the public. This last space is decorated with a collection of 12 pictures of cats performing the works of Shakespeare, including “King Lear,” “Hamlet,” “Romeo and Juliet” and “Julius Caesar.” “The group has already hosted an Opening Gala Weekend to introduce people to LTG’s new home and whet their appetites for more exciting events to come. We started with a Coffee Morning held in the spacious patio overlooking the garden,” said Antkiw, visibly pleased with the results. “This was followed in the evening by a Cabaret Night which included a scrumptious buffet and great musical performances. A selection of short theatrical performances with brunch-time treats was also extremely popular.”

The gardens and the main room are being used to present performances, readings, and movie nights so far. For the future, LTG is cooking up plans including pint-and-poetry nights, and also a production of “A Christmas Carol” for the holidays.

As a fundraiser last month, the LTG presented a reading of “Table Manners” from “The Norman Conquest” trilogy by Alan Ayckbourn, featuring 12 LTG actors. The audience enjoyed it enormously and the group has received requests for more of “The Norman Conquests,” so the group is working on plans to perform the other two parts of the trilogy.

A big event is scheduled for this weekend in order to raise awareness in advance of the United Nations Convention on Climate Change 21st Conference of Parties, to be held at the end of the month in Paris. In partnership with Earth Charter International, the LTG is producing “Nature Acts,” a series of monologues and short plays ranging from thought-provoking to humorous. The works will be performed by Little Theatre Group and University for Peace actors, led by directors Douglas F. Williamson, Ann Antkiw, and Annette Hallett, with a total of three performances throughout the weekend (details below).

The Little Theatre Group is always looking for talent; no previous experience is required. Stay alert for their calls for auditions through the websites listed below, and join this longstanding group, whether onstage or in the audience.