The rainy season finally started in earnest in these last few weeks and the arrival of heavy rains has municipal authorities scrambling to address the flooding and sinkholes that have become a seasonal headache for drivers and pedestrians alike. The National Meteorological Institute announced Monday that heavy rains were expected this week and the next for the Central Valley and the Pacific coast.

The latest sinkhole to appear this year was a 6-meter wide, 11-meter deep sinkhole that opened up over the weekend on the street near the Transportes Costarricenses Panameños bus station in Plaza Víquez. City workers started repairing the gaping hole that opened between Avenue 20 and 5th Street on Tuesday.

The Tico Times was not able to reach San José Public Services Director Marco Corrales for comment after several unanswered calls to his cellphone, but the Municipality of San José released a brief statement explaining that the aging sewer infrastructure and the heavy weight of vehicles passing over the high traffic stretch of road all contributed to the hole that opened over the weekend.

News website CRHoy.com reported that it would take between four and six weeks to complete the repairs to the busy road. Corrales told the news website that the sinkhole was on the municipality’s list of pending repairs before Mother Nature forced it to the top of the list. Corrales said that the repairs could cost as much as ₡5 million, or roughly $9,400.

Aging infrastructure, lacking maintenance and trash that blocks drains and backs up sewers caused another sight last month. On Sept. 25, a sudden downpour flooded San José’s Chinatown when a sewer line backed up.

Sinkholes and flooding are a pain, but there is a silver lining: memes. 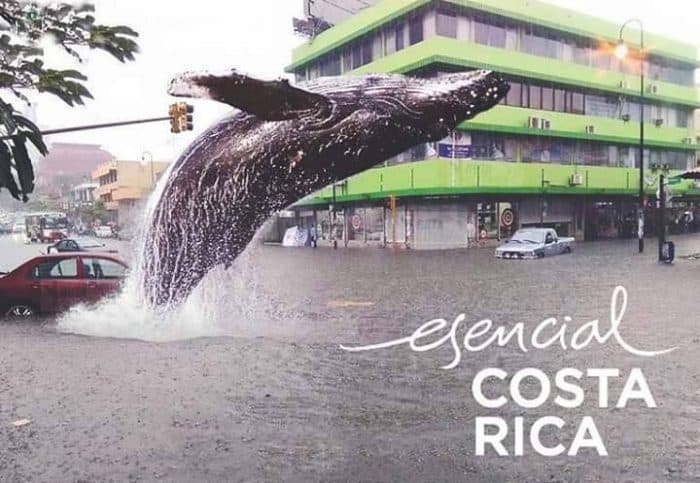