Costa Rican government at odds over landing of US military helicopters 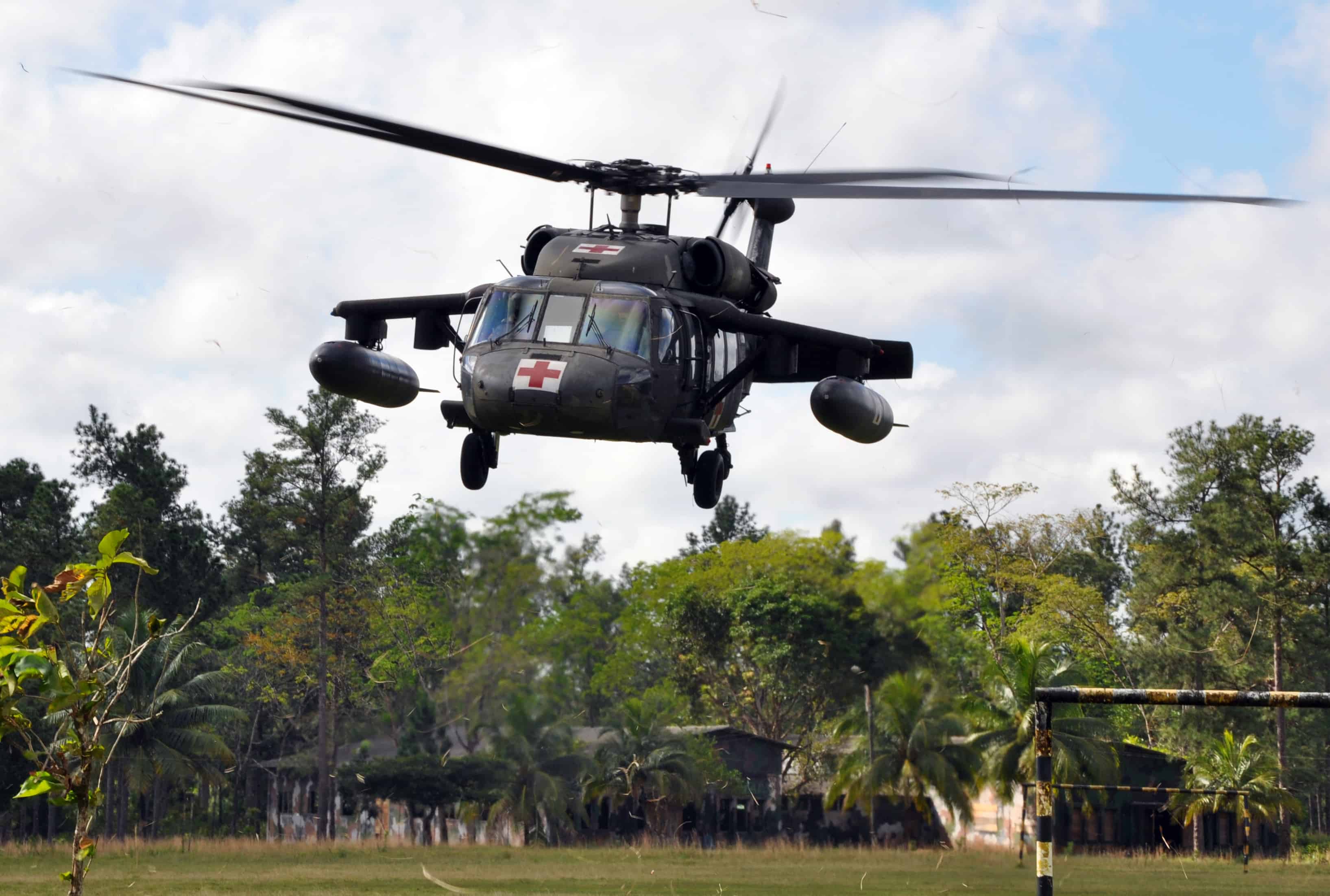 For illustrative purposes: A UH-60 Black Hawk helicopter assigned to Joint Task Force-Bravo's 1-228th Aviation Regiment lifts off from Mocoron, Honduras, to conduct a medical evacuation of a 6-week-old infant in the remote village of Auka, on Dec. 3, 2013. ((U.S. Air Force photo by Capt. Zach Anderson))

A brief stopover by five U.S. military helicopters in Costa Rica over the weekend drew the ire of lawmakers who claimed the landing violated Costa Rica’s sovereignty.

The executive and legislative branches of government have been disputing the legality of U.S. military vessels in Costa Rica since both countries signed a joint-patrol agreement in 1999, but the Constitutional Chamber of the Supreme Court also has been wary of U.S. military aircraft and ships here.

Costa Rican media reported that five CH-47 Chinook and UH-60 Black Hawk helicopters briefly landed at Daniel Oduber International Airport in Liberia, Guanacaste, on Sunday. The U.S. Embassy in San José confirmed the landing, saying the aircraft were “doing a routine refueling as part of a regional medical mission and had all the required permits as part of the bilateral agreement between the U.S. and Costa Rica.”

The presence of U.S. military vessels – including Coast Guard ships and unarmed helicopters– in Costa Rican territory routinely sparks criticism from some lawmakers. Under Article 121 of the Costa Rican Constitution, the legislature is tasked with approving any egress of foreign troops and military vessels. This issue has become a perennial debate since the U.S. and Costa Rica signed a joint-patrol agreement in 1999 that allowed U.S. ships to patrol Costa Rican waters in cooperation with the Costa Rican Coast Guard in pursuit of drug traffickers.

Costa Rican law enforcement agencies have previously stressed that the agreement is key to its anti-drug trafficking efforts, but many lawmakers from the Broad Front Party and ruling Citizen Action Party have been critical of it.

Following the landing over the weekend, ruling Citizen Action Party lawmaker Ottón Solís told Channel 7 TV News Wednesday that the helicopters did not land for emergency reasons and that there was no reason why the Assembly was not consulted. On Monday, lawmakers presented a formal complaint to the Legislative Assembly over the refueling.

During a plenary session on Monday, Broad Front Party lawmaker Francisco Camacho said he believes that without the consultation of the Assembly, the landings violate Costa Rican sovereignty. Camacho said residents in La Palma reported that two U.S. Black Hawk helicopters landed there on on Aug. 17. Alexis Sullivan of the U.S. Embassy said those helicopters landed for emergency reasons but had permission from Costa Rican authorities.

“It’s something completely normal that some are trying to make noise over, taking it out of its context because they [the helicopters] are supposedly dangerous and from the United States,” González said. The minister said the helicopters were not carrying armaments.

González said that during the Community of Latin American and Caribbean States summit in San José in January several leaders traveled to Costa Rica in planes that were the property of their respective country’s air forces. González said there was no need to request permission from the Legislative Assembly for those flights despite technically being military aircraft.

The Constitutional Chamber of the Supreme Court, or Sala IV, however, has ruled against the approval of U.S. military helicopters flying here without express permission from the Assembly. During U.S. President Barack Obama’s visit to Costa Rica, unarmed Black Hawk helicopters flew over San José. In July 2013, the Sala IV noted that it was the purview of the Legislative Assembly to determine whether or not a military vessel or aircraft fits the requirements to enter Costa Rican territory, not the Civil Aviation Authority, which approved the helicopters’ entrance in 2013 and last Sunday.